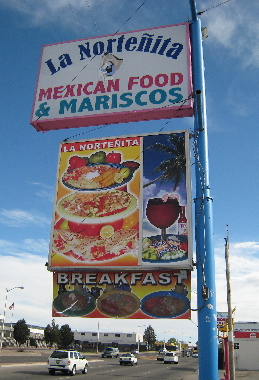 The only disappointment (and it was a minor one) we experienced during our inaugural visit to La Norteñita was in not hearing the lively Mexican polka “Mi Nortenita” crackling over the restaurant’s tinny speaker system. That would have made our visit to “Old Mexico” complete.

More than most Mexican restaurants in Albuquerque, La Norteñita (the little northern girl) has the look and feel of a restaurant in one of Mexico’s northern states.

That means a kitchen and wait staff (and most customers) barely conversant in English, a lustrous color palate on the stark walls, mañana paced service and flavorsome food not adulterated for American tastes.

The original La Norteñita has been around for several years, situated on Central Avenue in an edifice most Americans might consider a “dive.” Business was so good that its owner (ironically from Puerto Vallarta which is in central Mexico) launched a second La Norteñita restaurant about three miles from the original.

A second La Norteñita was launched at the site which once housed Cha Cha’s, DeLillo’s All American Cafe and Christina’s restaurant, all very good restaurants in a heavily trafficked yet seemingly doomed to failure location. If you had wagered that La Norteñita would succeed where its predecessors failed, you would have lost. That is despite the primary reason it should have succeeded–authentic and delicious Mexican food at Old Mexico prices.

La Norteñita’s second location had several dining rooms in the luminous colors of the ultraviolet spectrum. On one dining room, you were surrounded by almost unnaturally, shockingly bright orange and yellow hues while equally intense blue walls were visible in another room. In contrast, the dark brown vigas on the ceilings seemed boring and out-of-place. On one dining room, the sole decorative touch was a framed picture of a vibrantly plumed rooster.

Belying its stark ambience, La Norteñita serves wonderful food. The jalapeño-based salsa is your introduction to taste sensations which will remind you of Old Mexico. Onion, cilantro, garlic and even jalapeño seeds coalesce in piquant bursts of flavor. Housemade chips have a pronounced toasted corn taste and are lightly salted, crispy and fantastic.

Both breakfast and lunch menus offer tantalizingly tempting options, some of which you don’t often see in Albuquerque restaurants. One such rare treat is the caldo de albondigas. A simple translation would be “meatball stew,” but that wouldn’t do justice to what turns out to be a hearty broth in which swim carrots, onions, meatballs (of course) and a whole red potato. This is Mexican comfort food at its finest.

Chilaquiles is another rare gem. A Mexican casserole originally intended as a way to use up stale tortillas, it has been refined at La Norteñita into a layered dish of corn tortillas, potatoes and beans covered in red chile. Layers of flavor is more like it. Best of all, this dish also comes with carne asada, very well seasoned and flavorful cubed beef.

Entrees are accompanied by your choice of flour or corn tortillas. Savvy diners will always opt for the corn tortillas which might have no equal in any Albuquerque restaurant. The tortilla warmer holds four housemade tortillas, the thickness (not quite as thick as tortillas used in pupusas but close) of which you don’t often see. At the bottom of the tortilla warmer is a hand-laced doily which helps hold in the moistness and heat to ensure your tortillas don’t cool off–not that they’ll have a chance to as quick as you’ll devour them. Did I already mention these are the best corn tortillas served in any Albuquerque restaurant?

La Norteñita is a relatively small restaurant, but it’s big on flavor and ultimately, that’s where it counts.