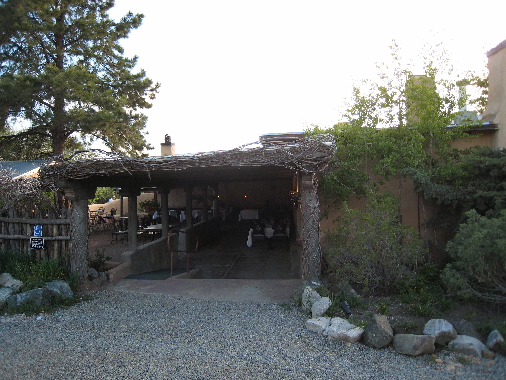 We’ve all heard the expressions from a jack to a king, from a moth to a butterfly, from a lump of coal to a diamond, but who’s ever heard…from a chicken coup to an elegant gourmet restaurant?  That sounds like more than a bit of a stretch, yet that’s the metamorphosis that transpired decades ago at what is currently the site of Sabroso, one of Taos county’s swankiest dining establishments.

Local lore posits that in 1960, entrepreneurs started a restaurant not just on the site in which a chicken coup stood, but from its very walls.  That restaurant was christened Casa Cordova, a name it would proudly bear for years.

Over time and with changes in ownership, Casa Cordova became Momentitos de la Vida, a restaurant which would go on to earn AAA’s four diamond rating for four consecutive years (2000-2004).  In 2005, Momentitos closed its doors for good.  Several months later, in August of 2006, Sabroso emerged and is carving out its own niche in picturesque Taos county.

Sabroso’s new ownership made a conscious effort not to be as ostentatious as its predecessor, a move intended to create a broader appeal to potential local patrons.  A bar menu featuring tapas style “small plates” and wood-grilled entrees (baby back ribs, burgers, salmon, etc.) has a price structure (nothing over $22) you would never have seen at Momentitos.

Despite lower prices than the previous tenant, there’s no down-scaling the quality and class of this high-end dining establishment in a picturesque setting backdropped by the majestic Sangre De Cristo Mountain range.

Just beyond the babbling brook near the entrance to the property is a half-acre of venerable plumb trees, the bounty of which often makes its way onto the menu in the form of a redolent sauce or tasty dessert.

The restaurant’s entrance is a large patio which can accommodate two dozen diners under the portal’s cooling shade.  A U-shaped bar and several open-air tables provide comfortable seating for even more diners.

Each of the restaurant’s stylish candlelit dining rooms features its own fireplace which combines with burnished copper candle sconces to illuminate the room with just enough light to read the menu and catch the glimmer in your dining partner’s eyes as she takes in one of the most enchanting and romantic restaurant settings in New Mexico.  The massive overhead vigas and the muted patinas of century and a half old adobe walls provide a comforting sense of sturdiness.  The seating is cozy, embracing you in style.  Conversations are in low tones punctuated by unobtrusive visits by a very attentive and knowledgeable wait staff

When not busy, Sabroso is intimate enough that your meal might even be brought to your table by executive chef Timothy Wooldridge, a wizard on the stove with impressive credentials.  During our inaugural visit, the chef had just returned from an exclusive week-long course on advanced Mediterranean cuisine at the prestigious Culinary Institute of America.

At the very least, Wooldridge seems to make it a point to visit each table to ensure everything is to the satisfaction of his customers.  I was more than impressed by the just acquired food stains on his chef’s uniform, an indication that he’s in the kitchen preparing meals himself.

And what meals!  An eclectic menu of American and “global cuisine” appetizers, entrees and desserts includes options sure to please the most discerning palates.  You’ll undoubtedly see something on the menu for which you’ll expedite a future visit.

The selection of appetizers spans the globe as well as the sea and earth.  They range from hummus and baba ghanouj to fresh gulf oysters and moules mariniere (mussels).  If your preference is salads, four sensational options are available.

The pear and gorgonzola salad is plate-licking good with an array of complementary ingredients: pickled shallots, spiced walnuts and pungent gorgonzola drizzled with a pomegranate molasses vinaigrette.  Served in a small plate, it is the type of salad you would want in a bigger portion, even if you don’t generally like salads.

The menu lists five main courses and five wood-grilled specialties including the catch of the day.  Your catch might be Sabroso’s bouillabaisse, the traditional Provencal fish stew of scallops, mussels, shrimp, calamari, squid and other bounties of the sea in a light tomato, herb and wine broth.  This traditional French dish is rich and hearty.  The seafood is off-the-boat fresh and delicious.  Three pieces of crostini with a saffron rouille accompany this entree.

Landlubbers might also opt for one of the restaurant’s wood grilled specialties, such as the New York steak, available in eight, ten and twelve ounce strips.  All steaks are hand-cut then hand-rubbed with a dusting of a house specialty rub.  A pink hot center welcomes those who prefer their steak at medium done.  The steaks are accompanied by selected seasonal vegetables and the chef’s choice of starch.

For an additional three dollars, you can add a generous slice of Stilton cheese, an English blue cheese injected with the same penicillium mold that produces Roquefort cheese.  Stilton is an outstanding cheese!

A variety of tempting dessert options ostensibly as wonderful as your meal is available.  We were somewhat surprised that Taos Cow ice cream, made in the village of Arroyo Seco, wasn’t a dessert choice, but it’s easy to forgive Sabroso and by your second bite of the decadent pot de creme, you might wonder why you were concerned about a cow in the first place.