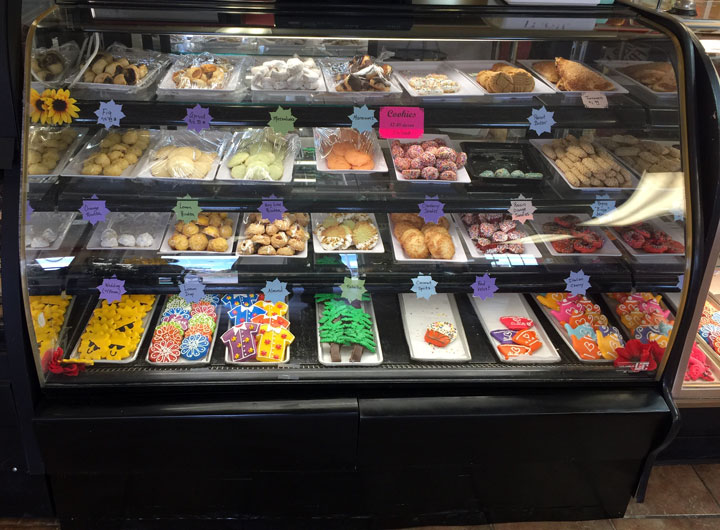 In 2007 serendipity had a hand in one of the most delicious additions to the Tully’s deli fortunes, an addition that had nothing to do with sandwiches, meats, pastas or other deli deliciousness. Rather than find a new tenant for the recently vacated shop next door, Johnny Carmuglia converted it into an Italian Pastry Shop which he named by combining the names of his two daughters Sara and Tori. Thus was born Saratori di Tully.

One seasonal favorite sure to make all pastry lovers swoon, particularly those who love pumpkin pie, is pumpkin cinnamon rolls. Their shimmering orangey hue is a telltale sign of the flavor you’re going to encounter with each and every bite, but these aren’t simply spiral-shaped pumpkin cakes with a sugary glaze. There’s plenty of cinnamon in these pumpkin indulgences. They’re also soft and doughy, but not too much so. Alas, they didn’t make it all the way home so we didn’t get to heat them up, but we can well imagine how good they would be out-of-the-oven warm.

Hard to spell, difficult to pronounce, but absolutely easy on the taste buds are Saratori’s Sfogliatelle, shell-shaped pastry stuffed with ricotta and orange pieces. The pastry shell made from layering phyllo dough, but miraculously you won’t have phyllo crumbs all over you as you bite into this pastry. The ricotta and orange combination has the richness characteristic from ricotta and just a slight tanginess from the orange piece.

It wouldn’t be an Italian bakery without cannoli, a Sicilian favorite available with a chocolate shell or a traditional tube-shaped shell of fried pastry dough. The cannoli are engorged with a sweet creamy ricotta cheese filling blended with chopped chocolate chips. The chocolate shell cannoli are sprinkled with a powdered sugar. These are some of the best in town. The cannoli are even better when engorged with a spiced pumpkin and ricotta blend. Its at autumnal specialty at Tully’s. Best of town would describe Saratori’s apple strudel, too, were it not for Dagmar’s Restaurant & Strudel House.

Biscotto (cookie) trays come in small, medium and large sizes. A small tray is made up of two-and-a-half to three dozen cookies while a large tray holds anywhere from eight to nine dozen cookies. After sampling just a few, you might have to be held back from not eating an entire tray yourself. They’re that good. Our early favorite are the Lemon Biscotto, round mounts of sweet, lemony pastry perfection. Also wondrous are the fig bowknots and apricot bowknots, both filled with real fruit not the gelatinous artificial stuff.

Generations of Albuquerque diners have been making memories of their own at Tully’s for nearly forty years. There appears to be no surcease to Tully’s enduring legacy, especially now that Saratori’s di Tully is now in the fold. For that my memory banks and nostrils are grateful.