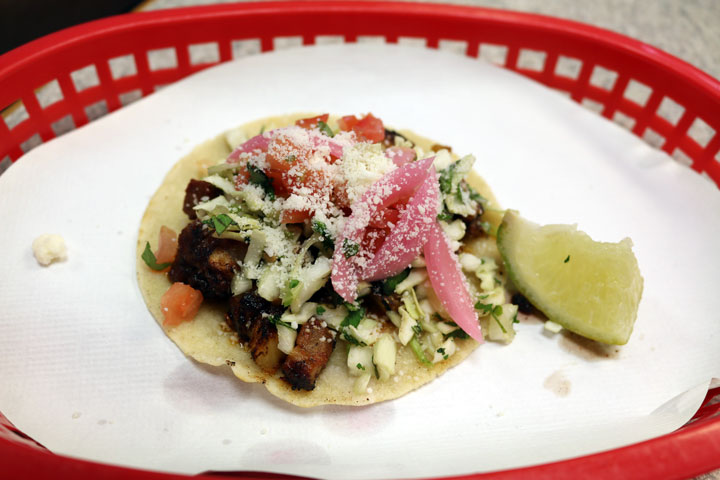 I count in almost equal measure, friends, family members and colleagues who label themselves as either militant liberals or staunch conservatives. Despite what they may think, they have more in common than they’d ever admit. Passionate ideologues, they all regurgitate political dialogue in talking point format. They’re uncompromising in towing their respective party line. They would never see merit in counterpoints from “the other side,” ergo, they never compromise. They’re all are passionate, almost to a fault. You could say they’ve all been been fully assimilated and they’re not going to change. It sure makes it difficult to share a meal with people when their disparate principles, ethics and beliefs make them incompatible with those of opposite perspectives.

Despite the old maxim that you should never discuss politics or religion at the table, there’s one restaurant in Albuquerque that practically invites diners to discuss politics even as they’re perusing the menu. That restaurant is the Krazy Lizard Taqueria on Jefferson Street just north of Singer. The menu is posted above the counter where you place your order. Now, political discourse would be easily avoided if the sole focus of the menu was breakfast, burritos, tortas and salads. Those items don’t have politically charged names. It’s when you get to the tacos section of the menu where divisiveness can set in and emotions can run high.

Politics pervade the name of every taco on the gourmet tacos menu. Aside from The Republicans, The Democrats and Libertarian, you’ll find tacos with such names as Outsourced, Popular Vote, Bad Hombre, Wikileaks, Credible Sources, The House, The Immigrant, Fake News and Congress. I pictured my friends Carlos, a Reagan Republican and Hien, a self-professed “Obamanista” lambasting the tacos named for the opposing political party. Carlos would undoubtedly point out that one of the seasonings on The Democrats (ground beef seasoned with in-house taco seasoning, chipotle mayo) is cumin, which he considers a corruption much like the party he loathes. Hien would harangue The Republicans (marinated pork with pineapple) as a metaphor for Republican pork barrel spending. From there the conversation would get nasty quickly.

Fortunately my dining companion was my bride of 32-years who, like me, would rather discuss the colorful artwork on the walls of the Lilliputian eatery. Those walls are festooned with human and canine visitors who returned to this world for El Dia De Los Muertos, the Day of the Dead. During this Mexican holiday, the profusion of skeletons of all sizes performing day-to-day activities signifies the return to this world of the dead who remain who they were when they lived, doing what they did. For example, the skeletal figure regaled in charro outfit and strumming a guitar on the east wall, was a Mexican mariachi in life. Therefore in death, he remains a mariachi. His companion, attired in a flowing skirt, was a folklorico dancer in life and remains one after life. The counter housing the salsa trays depicts a skeletal dog according to Krazy Lizard owner Hanif Mohamed.

Ironically, we first met Hanif on the patio of Breve Crepes & Coffee where we struck up a conversation about dogs, an easily flowing topic because we were dining with our debonair dachshund Dude. When we got to the inevitable perfunctory small chat about what we do when we’re not enjoying crepes and coffee on a patio, Hanif told us about his restaurant, Krazy Lizard, instantly appealing to us because it’s dog-friendly. Moreover, Krazy Lizard serves some of our favorite foods. We should have guessed from his irreverent sense of humor that there would be something different about his restaurant–and not just his politically-charged naming convention.

Hanif is proud to offer to the extent possible, products from local vendors and growers. He procures pinto beans from Estancia (there are none better in the world) and pork from a local south valley farmer. Other products come from the ever reliable La Montañita Co-op. Fresh and organic are hallmarks of his menu. Tortillas and tortas are made fresh in-house daily. Flour is unbleached. The black beans, green chile and flour are organic. Chicken and canola oil contain no GMO and eggs come from cage-free chickens.

Before there was a Krazy Lizard, there was the Jefferson Deli, Hanif’s first restaurant venture in Albuquerque. When it became apparent the items flying off the menu most quickly were specialty tacos, he changed his restaurant concept. Hanif is quite the entrepreneur. In addition to the Krazy Lizard, he owns and operates KayTahRing, a catering service specializing in customized menus, venue placement, and event design. Hanif actually has over 30 years of food and beverage experience in 4 Star – 4 Diamond properties in the United States and Kenya. Even in a small venture like Krazy Lizard, that experience is telling.

It comes across in the little touches other restaurants don’t provide, the real difference-makers guests remember. It comes across in the complimentary salsa bar, a practice fewer and fewer restaurants now offer. Salsas are roasted and made fresh in house from fresh ingredients. Krazy Lizard offers five unique and delicious salsas: roasted tomato-arbol salsa, described as flavorful and hot with a hint of sweetness from the tomatoes; roasted tomatillo-arbol salsa, the hottest of all salsas with great acidity from the tomatillo; roasted jalapeño-arbol, well balanced with heat and acidity; salsa verde, classic salsa with a Krazy Lizard twist; and pico de gallo, bountiful, flavorful and caliente.

As chronicled in my review of the now defunct Señor Torta, your humble blogger believes it’s only a matter of time before the torta achieves the same or perhaps even eclipses the popularity of tacos and burritos. It only makes sense in a sandwich culture like the United States. As with sandwiches originating in the fruited plain, tortas can be constructed with a variety of different ingredients. A torta requires a split bolillo with your choice of meat or fish, and some type of cheese, but there are no hard and fast rules about this. Make it the way you want it with the ingredients you enjoy.

Krazy Lizard makes it the way I want it–large and in charge. There are six tortas on the menu, including an all day breakfast torta. If you like your sandwich of Dagwoodesque proportions, ask for the Mexican Cubano (pork, ham, Milanesa, tomato, onion, avocado, crispy pickle and Monterrey Jack). It’s the beach bully to the Big Mac’s 98-pound weakling, not only in terms of size, but in sheer deliciousness. It’s a paragon of complementing contrasts–the crunchy breaded Milanesa, a thin, pan-fried slab of meat and the sweet, thick ham; the silky avocado and the crispy pickle; the crusty exterior and pillow interior of the split bolillo. This is one of the very best tortas I’ve ever had anywhere.

In this age of fake news (no, not the taco of that name), it’s a challenge to find credible sources without bias or hidden agendas. If you want trustworthy, reliable, truly delicious Credible Sources, try the taco at Krazy Lizard taco by that name. A warm corn tortilla is stuffed with deep-fried battered tilapia, pickled onions, shredded cabbage, chopped tomatoes, queso and avocado crema. The avocado crema has a bit of a bite behind it, a pleasant piquancy which will delight your taste buds. The vegetables are fresh, crispy and delicious, a nice counterbalance to the deep-fried tilapia.

My Kim’s favorite taco is the taco al pastor which Krazy Lizard’s menu calls The Republicans and describes as “the original fusion food, marinated pork with pineapple.” Al pastor tacos, which translates from Spanish to “tacos in the style of the shepherd” were originally inspired by Lebanese shawarma. In Mexico, the meat for tacos al pastor is actually cooked on a spit then shaved or cut from it at the point of serving. Unless they’re served in huge quantities, tacos al pastor across the fruited plain are usually not prepared as authentically as their Mexican brethren. Krazy Lizard’s rendition is still no less delicious with sweet pineapple penetrating deeply into the savory, succulent pork. It’s a melding of flavors sure to inspire detente.

The Krazy Lizard is a fun venue whose delicious food and colorful ambiance should bring people together regardless of ideology. With mouths kept happy and full, who can argue politics.