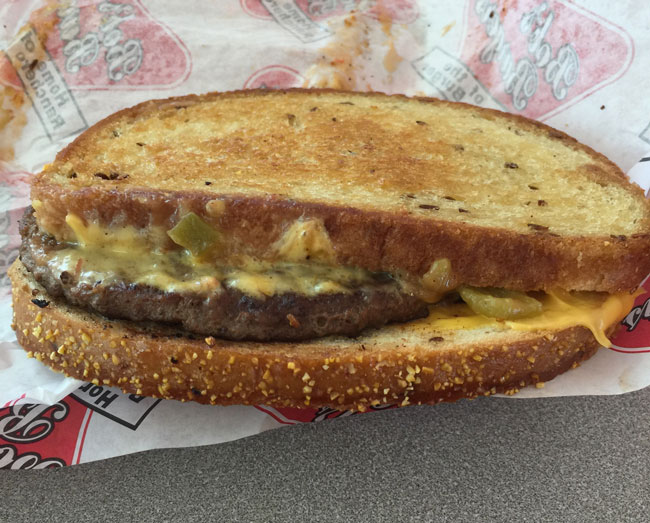 “Bob.” Advertisers (as well as television and movie producers) realize there probably isn’t a better example of an “every man” name, typically portraying Bob as the average wage-earning man about town. Few would argue that Bob, a diminutive of Robert, isn’t a very vanilla and common name. In fact, according to Social Security Administration data it was the fourth most common name in the United States with 9.5 instances per 1,000 people as of 2013. Despite that popularity, advertisers seem to prefer naming the metrosexual males they portray something like Brad or Troy (sorry BOTVOLR).

Bob’s Burgers in Albuquerque, Los Lunas, Las Cruces and Rio Rancho precedes the animated television program by that name by 48 years. Brothers Tom and Bob Salas launched the very first Bob’s Burgers in 1963 with their original restaurant at Copper and Sixth Street. Tom and Bob are still actively involved in the restaurant as is Tom’s son Clifford who owns several Bob’s locations. Everything is made to order at this popular New Mexico exclusive eatery. Unlike the green chile which tops so many burgers at other restaurants, Bob’s red and green chile bites back. Expect some of it to run down your arms. Expect to use three or four napkins per burger.

While advertisers may not think there’s anything memorable about the name Bob, New Mexico diners have known for generations that Bob’s Burgers stands out among its brethren as a unique franchise which doesn’t shy away from proffering hot chile. That chile, or more precisely chile sauce (a pureed blend of green chile, tomatoes, onions) provides a potently pungent and heady sensation with every bite of the Ranchero burger, the restaurant’s specialty. The meat patty is thin and there’s nothing especially noteworthy about the bun, but chile chile sauce is certainly memorable (at least to your singed taste buds).

Locals can handle the degree of heat in Bob’s featured fare pretty easily, but out-of-towners might consider it cruel and unusual punishment to consume the Ranchero burger or any of the other chili laden items on the menu. Unlike the green chile used on many green chile cheeseburgers throughout the Land of Enchantment, Bob’s chili warrants a sweaty brow, scalded tongue salute. There are two Ranchero Burgers on the menu, a Supreme (green chile, lettuce, tomato, cheese) and the standard Ranchero (green chile only) and they’re available in small or large sizes.

Bob’s menu offers a couple of variations on the Ranchero burger, including a tortilla burger in which a tortilla is substituted for the Ranchero burger’s buns and a taco burger in which a hard-shelled taco shell replaces the buns. Visit on Taco Tuesdays and this gem is discounted nicely. If you’ve never seen a hamburger patty nested in a taco shell, you might be surprised the first time you see this. Surprisingly, a hamburger patty nestled in a taco shell doesn’t taste at all like ground beef nestled in a taco shell. Bob’s is one of few restaurants to also offer a red chili burger (which Alibi voters have selected as the second best in the city behind only the Little Red Hamburger Hut.)

Bob’s Frito pie has been a perennial Reader’s Choice award winner during the Alibi’s annual restaurant poll. By no accounts is it as wonderful as the Woolworth’s version that started it all in Santa Fe more than fifty years ago, but as cheap Frito pies go, it’s pretty good. A small cardboard container overflows with crispy Fritos, piquant chile, cheese and a salad’s bounty of lettuce and tomatoes. It’s a messy proposition, especially with plasticware.

My very favorite item on Bob’s menu is the patty melt which you can have with red or green chile. The beef patty, cheese and chile are pretty much the same as used on burgers, but the light rye is top-notch. It’s lightly toasted and has plenty of caraway seeds. The toasted rye seems to do a better job of preventing the messy, molten chile from running down your arms. Moreover, it’s a perfect vehicle to bring out the best in the flavors of other ingredients.

I’ve always contended that Española restaurants make the very best rolled tacos (sometimes called taquitos) in New Mexico. In fact, not many restaurants outside of Española even seem to offer rolled tacos. Bob’s does and while they’re not quite as wonderful as their northern counterpart, they’re better than the warehouse store version.

In its September, 2012 edition, Albuquerque The Magazine named the salsa at Bob’s Burgers the eleventh best in Albuquerque from among 130 salsas sampled throughout the city. The magazine’s synopsis: “This may be a burger joint, but watch out for the hot salsa and some of the best chips (which are actual taco shells broken up) then twice-fried as you order them.”

This prominent local chain now has seven Albuquerque locations as well as one in Las Cruces, one in Rio Rancho and one in Los Lunas, all of which are poised to give your taste buds something uniquely New Mexico, something that is certainly not “every restaurant” worthy.