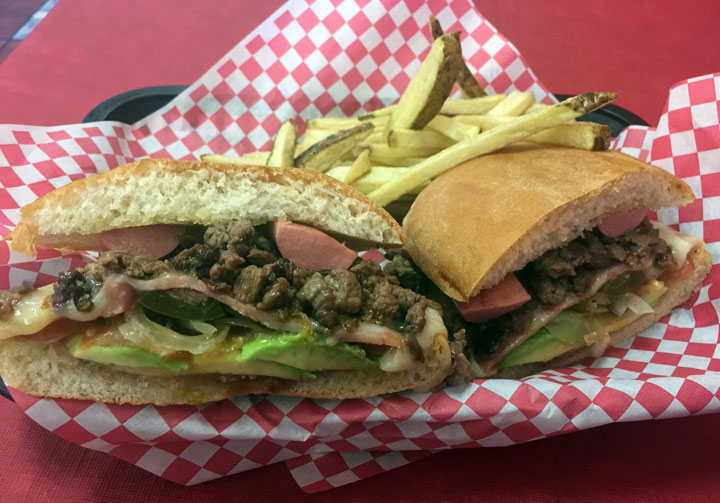 In Albuquerque’s panoply of Mexican fast foods, the torta–despite all its heartiness and versatility–is the “Rodney Dangerfield” of cheap eats. It garners no respect, warranting nary a mention in annual paeans to the “best of” virtually everything else Alibi and Albuquerque The Magazine readers care to celebrate. Long overshadowed and under-appreciated, the humble torta presents a glaring contrast to its culinary cousin, king taco. While the taco has become a pop culture diva, the torta has been relegated to a homely afterthought. It’s become cool to consume tacos, but tortas are the porn of fast food–usually kept wrapped until it’s time to enjoy them.

Could it be that there are still people who don’t know what a torta is? That may well be because the name “torta” is often confused for some sort of cake. One wonders if its popularity would have exploded if “Torta Bell” franchises had spread across the fruited plain instead of Taco Bell. Whatever the reason for its relative anonymity, tortas are long overdue recognition and adulation from the mainstream masses in the Duke City. While the culinary cultures in such cosmopolitan and urbane cities such as Los Angeles and Denver have embraced the torta, Albuquerque languishes behind.

While a number of Mexican restaurants in the Duke City offer tortas, only one diminutive diner contains the term “tortas” on its name and signage. That restaurant is Señor Tortas which follows “recipes made in Heaven” according to its Web site. Your can find this purveyor of divine deliciousness on Louisiana Blvd. about a mile south of Central Avenue. One of the most interesting aspects of its signage (and its Web site) is the mustachioed chef sporting a toque who looks suspiciously like the chef on old Italian stock photos. The restaurant’s walls are even more interesting, showcasing numerous posters, including one of Cantinflas, a pioneer of Mexican cinema. There’s also a reference to a “Grumpy Gringo Burger,” a remnant from one of the restaurant’s previous incarnations, a burger joint called (what else) the Grumpy Gringo Restaurant.

The Castillo family which owns and operates Señor Tortas has more than fifteen years in the food services industry and runs two food trucks also sporting the Señor Plata appellation. Although the restaurant’s marquee touts its “super tortas,” the menu offers other Mexican food standards such as tacos, burritos, enchiladas and a number of beef plates. Try those some other time. Your first visit should be reserved for one of the ten tortas on the menu. Compared to the ubiquitous sandwich chains, ten may not seem like a slew of sandwich options, but all it takes to hook you is one sandwich.

22 June 2015: “Hawaiana” sounds more like a pizza than a torta and some of its components are indeed featured on “Hawaiian” pizzas, but this is no pizza. The canvas for this sumptuous sandwich is a French-bread inspired telera roll which is topped by beans, avocados and jalapeños in addition to “Hawaiian” constituents: pineapple, quesillo (an Oaxacan string cheese), jamon (ham) and chuleta (pork chop). It’s a terrific sandwich with a diverse porcine-centric flavor profile forged by complementary and contrasting ingredients. Mexican ham is more smoky and thicker than most American hams and the pork chop is much thinner than the half-inch chops we enjoy. Together they form the basis for a very enjoyable sandwich.

12 January 2017: You may have noticed on the photo below that there’s a bit of “glistening” on the Chrindonga (carne asada, salchicha, jamon) torta. Unfortunately, this torta is quite greasy which might be off-putting to some diners. To offset the greasiness, ask for additional japaneños. A small bowl of pickled jalapeños, onions and carrots might not make the carne asada and salchicha (sausage) less greasy, but they’ll liven up the flavor profile a bit. The pickled jalapeños aren’t so piquant that an asbestos-lined tongue would be necessary, but they do complement the other ingredients. Had this torta been “degreased” it would have been quite good.

If you ponder the matter, you may conclude that the torta supplants the taco in portability, mass, value and dare I say, even deliciousness. Señor Tortas is at the forefront of giving the humble, but hearty paragon of sandwich greatness, its well-deserved just dues.