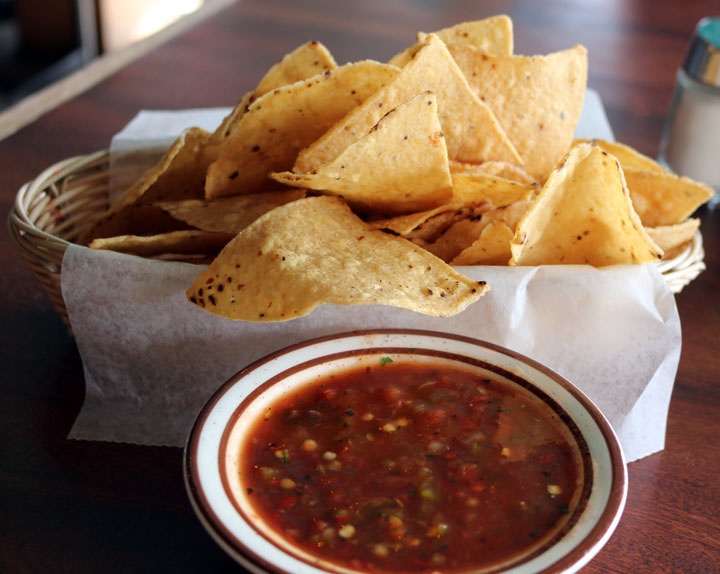 There are restaurants throughout the Duke City that have seemingly always been “there.” They’re as much a part of the fabric of the city as the neighborhoods they serve. Casa de Benavidez is one of those restaurants, a familiar part of the landscape on North Fourth Street, some would say an institution. Despite the notion of permanence, this venerable treasure has, in fact, been around only since 1984–at least under its current name.

Before there was a Casa de Benavidez, there was, just a mile or so away, a tiny little eatery with only three tables and a bustling take-out business. There was also a dream, the shared ambition of Paul and Rita Benavidez to serve their hometown with the food they loved and prepared so well. At El Mexicano, a diminutive eatery they operated with their children, that dream began the transformation from monochromatic to technicolor with every one of their trademarked sopaipilla burgers sold.

While the family was selling more and more sopaipilla burgers, they were also stockpiling used restaurant equipment in hope and anticipation of an expansion that would allow them to more fully realize their dreams. Not far from their diminutive digs, Paul found a nearly 100-year-old two-story territorial style adobe home with a half-finished waterfall just south of the structure. Quickly consummating the sale of the home, the Benavidez family moved out of their old location into the sprawling edifice in just one day. The rest, as the proverbial “they” say, is history.

Over time, the carryout business at the back of the home became so successful that the family expanded their operation to include a full-service restaurant in the front of the house. The restaurant was rechristened “Casa de Benavidez,” and the dream culminated with a commodious restaurant offering an expansive menu featuring traditional New Mexican and Mexican food in elegantly appointed interior dining rooms and exterior surroundings that include lush gardens, a koi pond teeming with life and strolling mariachis.

On the marquee, subtitled directly below the restaurant’s name, are the words “Home of the Sopaipilla Burger.” That’s a recognition of the role played in the restaurant’s early and current successes by its unique rendition of New Mexico’s ubiquitous green chile cheeseburger. Several other restaurants offer their own take on a sopaipilla burger, but Casa de Benavidez’s version was the very first and it remains first in the heart of its loyal patrons, some of whom order the “jumbo” sized half-pound version.

Repeat after me (to the tune of the old Big Mac jingle) — one all-beef patty, refried beans, lettuce, cheese, tomato and chile (red, green or both) on two sopaipilla “buns.” That’s the sopaipilla burger, still one of the most popular and celebrated items on the menu. The sopaipillas are more dense than the puffed-up sopaipillas on which New Mexicans love honey. They’re formidable enough not to fall apart at the moistness of other ingredients, but if the chile is ladled on a bit too generously, expect your hands to be covered in the red or green stuff.

Casa de Benavidez was one of the first restaurants we visited after moving back to Albuquerque in 1996. It didn’t surprise us when this casa was the 1996 winner of KOB TV’s “Salsa Challenge.” The salsa is about medium on the piquancy scale and has a garlicky flavor aficionados love while the chips (served warm) are unfailingly crisp and fresh. Alas, sometimes because of overflow crowds your empty salsa dish isn’t replenished as faithfully as at other New Mexican restaurants. That’s about the only short-coming in the service which tends to be friendly and attentive. That salsa, by the way, was named Albuquerque’s fifth best salsa by Albuquerque The Magazine from among a sampling size of 130 different restaurant salsas reviewed in the September, 2012 issue.

The menu features many New Mexican standards, but it also includes “foreign” items such as chimichangas (Tucson) and fajitas (Texas). Breakfast is served Friday, Saturday and Sunday with lunch and dinner (same menu) served every day of the week. Lunch specials are a more economical dining option than dinners. To say Casa Benavidez is one of the more pricey New Mexican restaurants might be an understatement. You might experience a bit of sticker shock at seeing some items approaching the nine dollar price point–and that’s just the appetizers. The entrees are all priced in double-figures.

3 January 2017: Perhaps the best way to experience the restaurant’s culinary wizardry is by ordering one of the four combination plates. Combos are served with beans, rice, one very special rib and sopaipillas. Combination plate number one features a cheesy enchilada, a taco, a crunchy chile relleno and a tamale. Of these, the real stand-out is the crunchy chile relleno whose sweet, battered texture is unlike any other we’ve had in Albuquerque. The special pork rib is unique to Casa Benavidez. It’s a real treat. Be forewarned that combination plates are humongous–large enough for two.

One of the restaurant’s very best, albeit most unconventional entrees are the succulent pork short ribs: four meaty ribs on which is slathered a semi-sweet and smoky homemade sauce. These are multi-napkin ribs, the type of which will leave a red beard on any clean-shaven face. They’re better ribs than you’ll find at several of the Duke City’s barbecue restaurants. That goes for the sauce, too. You’ll find yourself dredging up excess sauce with the accompanying fries (or you can have rice).

3 January 2017: My Kim tells me it’s a woman’s prerogative to change her mind. She does so frequently, but rarely when ordering at a New Mexican restaurant. Almost invariably, she’ll order the carne adovada plate though only with the chile in which the carne has been marinated, no extra. Casa de Benavidez serves some of her favorite adovada. Tender tendrils of easily pulled apart pork marinated in a rich, hearty red chile make her happy and when she’s happy, Gil’s happy. The carne adovada plate is served with Spanish rice and beans (which she passes over to me).

3 January 2017: Casa de Benavidez offers a number of desserts: German chocolate cake, carrot cake, fried ice cream, flan, natillas, brownies and a sweet roll. The natillas are topped with a very generous dollop or ten of whipped cream. When scraped off, not much of the natillas actually remain. That’s too bad because these natillas are cinnamon rich, creamy and delicious.

On Fourth Street, facing east Casa de Benavidez is at the forefront of the Sandia Mountains. Both seem to have an air of distinction and permanence. Because of its longevity and community standing, the Casa de Benavidez is on the New Mexico Tourism Department’s “Culinary Treasures trail,” an initiative which honors those rare and precious family-owned-and-operated gems operating continuously since at least December 31st, 1969. As with all the restaurants on the list, the Casa is an independent mom-and-pop restaurant which has stood the test of time to become beloved institutions in their neighborhoods and beyond.