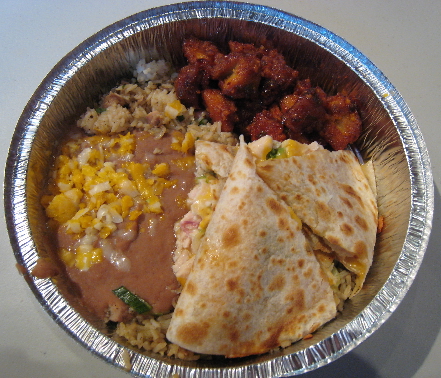 Gustavo Arellano has the right idea. The brilliant and hilarious author of Ask A Mexican, a widely syndicated alternative newspaper column, confronts the “bogeymen of racism, xenophobia, and ignorance” with humor. In his weekly column, he defeats stereotypes and those who wield them by using deprecatory wit to exaggerate those stereotypes to the point of the ridiculous. In the Language chapter of his uproarious book, he provides a list of commonly used Mexican terms and phrases so that “you, too, can become a Mexican.” The book defines a “Chino” as “literally “Chinese,” but the catchall phrase Mexicans use for all Asians regardless of nationality.” This is clarified with the example: “Vietnamese food is my favorite Chino cuisine.”

I found it deliciously ironic when my friend and fellow gastronome Bill Hanson told me about a Phoenix restaurant named Chino Bandido which supposedly takes “fusion” cuisine to a new level.  Fusion cuisine is the inventive combination of diverse, sometimes disparate culinary traditions, elements and ingredients to form an entirely new genre. In large metropolitan areas, particularly in California, the fusion of different cuisines is commonplace. Restaurants featuring the melding of French and Chinese cuisine are especially popular.

The joining of Mexican and Chinese cuisine is nothing new to me. The now defunct Maverick Cafe in San Antonio, Texas, which I frequented back in the 80s became famous for their “East Meets West” dining concept. It wasn’t so much a fusion of cuisines as it was the plating of different cuisines (Mexican and Chinese) on the same salver. Chino Bandido takes fusion cuisine to a level far beyond what the Maverick Cafe envisioned. That fusion was celebrated on a Food Network’s Diners, Drive-Ins & Dives program celebrating a veritable smorgasbord of inspired international cuisine in America.

It stands to reason that host Guy Fieri would relate to the cuisine. Several years ago Fieri launched Tex Wasabi, a restaurant serving Southwestern barbecue and California-style sushi, as innovative a fusion of disparate cuisine as you’ll find anywhere.  Raw fish and ribs on the same plate seem perfectly normal to the hyper-energetic Fieri who is never at a loss for catch phrases such as “off the hook” and “out of bounds,” two of the buttery axioms he used to describe Chino Bandido.  His effusiveness for the restaurant is obviously genuine. He scrawled “This is the greatest place in the USA! If I lived here, I’d eat it 3X a week!” on a signed poster now posted in a prominent space within the restaurant. Now that’s a rousing endorsement, one that has generated a lot of new traffic to and interest in a restaurant concept that as Fieri might say is “too cool for school.”

Chino Bandido is the brainchild of Frank and Eve Collins who started the business in November, 1990. The restaurant’s name was initially suffixed with the term “Takee-Outee” reflecting much of its business. At only 1,000 square feet, it didn’t accommodate too many patrons. Today the original Chino Bandido in Phoenix is over 5,000 square feet and seats around 150 patrons. In June, 2005, a second location, this one over 6,000 square feet plus an outdoor patio, launched in the burgeoning city of Chandler.

The Chino Bandido way of placing a food order is unique and fun. An accommodating wait staff will help you every step of the way and will even provide you with samples to help you decide what to order. All meat items are listed in the “rice bowls” section of the menu. A sole item in this section means a bowl of white rice with a single item on top. For a pittance, fried rice can be substituted for the white rice. A combination is any two items and includes beans and rice. Those two items can be ordered in any of three ways:

Now it’s one thing to feature a clever food gimmick; it’s another to deliver. Chino Bandido does so with award winning food sure to please even the most discerning palate. Your palate will certainly enjoy an Emerald Chicken quesadilla (pictured above right). This is tender grilled, skinless chicken breast meat served with a fresh ginger and green onion sauce resembling Argentinean chimichurri in appearance. The ginger and green onion sauce packs a punch despite any discernable piquancy. In the proportions used on the chicken, the sauce will have a fresh and invigorating effect on your taste buds.

Jade Red Chicken, lightly coated, deep-fried chicken glazed with a slightly spicy sweet sauce, is the most popular item on the menu. Though it resembles the lacquered candy-coated sweet and sour stuff served in many Chinese restaurants, it’s better than most. My only complaint is that thigh meat is used instead of breast meat. While juicier than breast meat, thigh meat may be sinewy and tough. The refried beans are topped with shredded white and yellow cheese and are as good as any refried beans I’ve had in Chandler.

For a taste of the Caribbean, try the jerk fried rice, a Chinese-style fried rice with chopped jerk chicken and green onions. This is a fiery fried rice thanks to the Jamaican spice mixture that makes jerk style cooking one of the most tongue-tingling and delicious cuisines in the Western hemisphere. Each combination plate includes a Snickerdoodle, a sugar cookie characterized by its cracked surface. There’s plenty of cinnamon on these cookies, but the sweet taste is balanced by the slightly savory flavor of cream of tartar.

Guy Fieri called Chino Bandido “one of the neatest places shot on Diners, Drive-Ins and Dives.” I’ll echo that!