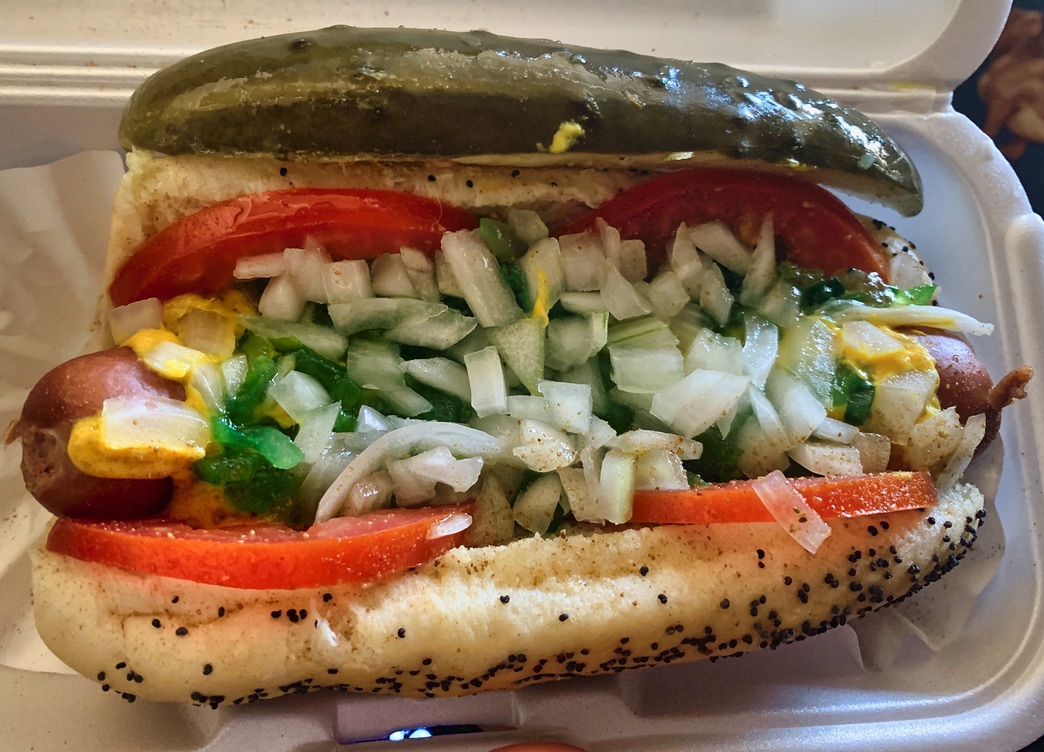 “I hate it. I think it’s an abomination.
There are so many awesome things here,
I don’t know why that should be featured.
It’s leading with your weakness.
So much other great stuff.”
~Anthony Bourdain

What could have rankled the ire of the world renowned celebrity chef, master raconteur and social activist?  Was it an injustice in dire need of exorcising?  Dystopian horrors in a faraway third-world country?  Devaluation of life?  Bringing to light those suffering in the dark?  No, my friends.  It wasn’t the broken world Bourdain railed against.  It was something much more apolitical…unless you’re talking about the politics of pizza, specifically between the warring factions of New York and Chicago.  What Bourdain found so appalling was Chicago’s deep-dish pizza.

Chicago deep-dish pizza is the Rodney Dangerfield of pizza.  Outside the Windy City, it gets no respect.  Cynics malign it as “not a pizza.” Others, such as Bourdain and former “Daily Show,” host Jon Stewart simply love to hate it.  In a particularly vitriolic rant, Stewart called it everything from a “fricking casserole” to “an above-ground marinara swimming pool for rats” and worse, much worse.  He suggested it would be complete with canned onion rings on top.  Even New Mexico resident George R.R. Martin, author of Game of Thrones, weighed in with “deep-dish pizza is an offense against the pizza gods.”

So what is it about Chicago deep-dish pizza that inspires such rancor?  Is it an exemplar of “too much of a good thing?”  As if there could possibly be too much cheese, too much sausage, too much deliciousness.  Do cynics find it offensive because it violates some sort of perceived cultural taboo as Chef Mario Batali seems to believe: “They (Italians) would kill themselves if they saw what was going on over there. They wouldn’t call it pizza.”  At least late Supreme Court Justice Antonin Scalia conceded “It’s very tasty, but it’s not pizza.”

Perhaps, as with politics, pizza is all about preference…and as we know, in American politics, it’s not enough to disagree with someone.  Contrarians have to denigrate and insult things with which they don’t agree.  Jon Stewart, Mario Batali, George R.R. Martin and other contrarians can have their insults.  We’ll take the deep-dish pizza, the best description of which may be courtesy of Serious Eats writer Dennis Lee who called it a “towering, molten, glorious gut-bomb that deserves some serious love and respect.”

When my Kim introduced me to deep-dish pizza at the world-famous Lou Malnati’s in Chicago, I wasn’t sure whether we should eat it or climb it.  True to stereotypes, it was as thick as my mom’s multi-layered lasagna and must have weighed four or five pounds.   It was probably a good thing that more than 45-minutes elapsed between the time we placed our order and when it was delivered to our table.  The wait, amid the enveloping aromas, made us ravenous.  Thank goodness for that or we wouldn’t have been able to finish one and a half slices each.

When we heard that Allan and Kameko, the amicable husband-and-wife couple who have made AK Deli one of my favorite sandwich destinations in New Mexico, would be opening a Chicago style pizza restaurant, we weren’t sure what to expect.  “Chicago style” is a very broad term that doesn’t necessarily connote deep-dish pizza.  Sure, deep-dish is the pizza style most commonly associated with The City of Big Shoulders, but it’s certainly not the only pizza style developed in Chicago.  The Windy City even has a pizza with a thin and crispy crust similar to New York.

What we did know is that at AK Deli, Allen and Kameko transplanted a little bit of Chicago to Albuquerque, offering the most authentic and delicious Italian beef sandwiches, hotdogs and other culinary treasures of that toddlin’ town.  If they could do for pizza what they’ve done for other Chicago culinary delights, Windy City transplants and aficionados will be very happy.  Alas, the paint on the walls had barely dried at their Fashion Square space when the Covid-19 epidemic prompted a closure of AK Pizza.  Our inaugural visit took place under social distancing, personal protective equipment-wearing conditions.

AK Pizza offers pan pizzas in seven, twelve and sixteen inch sizes as well as ten, twelve and sixteen inch thin crust pizzas.  Topping choices include many of the usual suspects: sausage, pepperoni, bacon, red onion, spinach, black olives, tomatoes and mushrooms, but where most guests will gravitate is toward the specialty pizzas.  Five unique specialty pizzas, including “A’s Favorite” and “K’s Favorite” grace the menu.  So do “Chicago Faves” such as a Chicago Dog, Ditka Polish, Italian sausage, Italian beef, Italian combo and Cheesy beef.  Wings (buffalo/jerk/BBQ/lemon pepper) round off the menu, but you can’t do Chicago without Jay’s Open Pit BBQ Chips.

22 May 2020: My Kim’s choice was a seven-inch deep-dish Cheesy Beef pizza, constructed with the same wondrous Italian beef you find in Italian beef sandwiches, green peppers and lots of cheese.  It wasn’t necessarily “towering,” but it was “molten” and “glorious, a four-slice orb about half an inch thick.  The one anomaly–perhaps one only a native Chicagoan would recognize–is the tomato sauce.  It’s just not something you normally find on an Italian beef sandwich (which is usually seasoned with dried oregano, dried basil, dried parsley and dried thyme).  The tomato sauce was nicely seasoned, too, but just a bit “strange” with Italian beef.  AK did manage something we hadn’t seen before–a thick crust with crispiness.

22 May 2020: Also from the specialty pizza menu comes the Gyros pizza (gyros meat, onions, tomatoes, cheese), a Greece meets Italy tribute that’s about as pretty as a pie can be.  It’s splayed out like a sunburst with rounded red tomato slices peeking out from a molten blanket of cheese.  As with the cheesy beef pizza, tomato sauce is a bit of an anomaly.  Tomato sauce isn’t something you normally associate with gyros.  Once you get past that, you’ll enjoy this pie.  AK Pizza even serves up a side of tangy tzatziki sauce worthy of gyros in Athens.

22 May 2020: Chicagoans lovingly refer to the Chicago hotdog as “dragged through the garden” because of the many accoutrements with which it is constructed: yellow mustard, chopped white onions, neon green sweet pickle relish, a dill pickle spear, tomato wedges, pickled sport peppers and a dash or two of celery salt on a poppy seed bun. Then there’s the Vienna Beef hot dog in a natural casing with its first-bite-snap. By the way, you should never say “Chicago style hot dog” because “style” implies Chicago’s hotdogs are a variation of an original.  Both AK Deli and AK Pizza serve a Chicago hotdog as good as any you’ll find in the Windy City.

22 May 2020: Located in the shadow of downtown skyscrapers, Maxwell Street is a mile-long venue beloved by Windy City denizens because of its diversity of commerce and cuisine. Nearly seventy years ago, a legendary sandwich was invented on the corner of Maxwell and Halsted Streets. That sandwich has become almost as famous as the street in which it was born. In the Duke City you can find the Maxwell Street Polish Sausage sandwich only at the AK Deli and AK Pizza. Take a bite and you might swear you’re strolling along the Maxwell Street market. It’s every bit as good as you’ll find in Chicago. The canvas for this paragon of deliciousness is a soft celery seed bun in which is nestled a thick, well-seasoned beef and pork sausage with a smear of mustard, a tangle of grilled Spanish white onions and a couple of sport peppers. The aroma and flavor of those sweet onions is so addictive, you could make a meal of just those  beauties, but you wouldn’t want to. This is a sandwich that’s great because of the sum of its terrific ingredients. This is sandwich greatness!

14 November 2020: Ask any Chicago transplant in Albuquerque or anywhere else to list the five things they miss most about the Windy City and it’s a good bet the list will include Italian beef sandwiches, a staple in Chicago. Citizens of the Toddlin’ Town are almost as passionate about this sloppy sandwich as they are Da Bears. Chicagoans grow up worshiping at high counters on which they prop their elbows as they consume Italian beef sandwiches–sometimes because the restaurant has no tables, but more often than not, because no matter how careful they are, they’re bound to spill shards of beef, bits of giardiniera and drippings of spice-laden beef gravy onto their clothing.

An Italian beef sandwich is made with roasted sirloin tip which is massaged with a blend of herbs and spices (oregano, black pepper, basil and more) before roasting. The beef is sliced Nicole Ritchie thin and is so tender it shreds into pieces. Kameko’s favorite Italian beef sandwich, by the way, comes from Portillo’s.   At many Chicago restaurants, it is momentarily immersed (dipped) in the gravy to make it even juicier. It is often served with either hot or mild giardiniera (a concoction of spicy, pickled, chopped-up vegetables such as peppers, carrots, cauliflower and celery), but sometimes with sautéed mushrooms and bell peppers. The entire creation is extremely messy; you dare not ever try to eat one while driving.  AK Deli’s version is like having an Italian beef sandwich at your favorite Windy City sandwich shop.  It’s that good!

14 November 2020: My favorite variation is an Italian combo which pairs Italian sausage with the Italian beef. AK Deli’s rendition is very good–even better when served “wet” (dipped). The gravy (au jus) is a wonderful counterbalance to the heat of the hot giardiniera.  Yeah, there’s a regular giardiniera, too, but that’s for wimps, not New Mexicans.  It’s the next best thing to having green chile on this sandwich.  In fact, the giardiniera is so good, I hadn’t–until just now–pondered what the Italian combo would be like with green chile.

Whether or not nay-sayers such as Anthony Bourdain, Jon Stewart and Guy Fieri would have enjoyed a deep-dish pizza at AK Deli may never be known. What is an absolute certainty is that Duke City residents will find plenty to love at AK Deli.