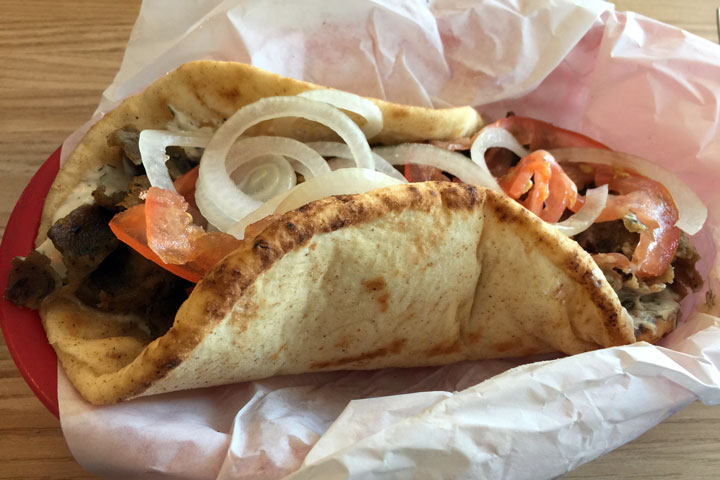 For culinary diversity, it’s hard to beat the University of New Mexico (UNM) area in which restaurants with a broad socioeconomic appeal are congregated. Aside from academic enrichment, this area is nurturing a refreshing open-mindedness toward the cuisines of the world. That seems to be a commonality in areas within easy walking distance of large urban universities. Perhaps restaurateurs recognize that students–especially the oft-maligned millennials–are not only willing to open up their minds to new knowledge, but their wallets and their minds to new culinary experiences.

The UNM area inaugurated many of us from rural parts of the state to wonderful new taste sensations. The heretofore enigmatic mysteries of the Orient unraveled themselves the first time we tasted the sweet and sour variations of Chinese food and braved cultural taboos to actually consume raw fish. The first time we sampled real pizza ((my friend Captain Tuttle can attest to this), we cursed Chef Boyardee and Pizza Hut for deigning to call their tomato sauce slathered cardboard “pizza.” We lost a bit of our naivete and innocence with each bite of each and every new culinary adventure we experienced. Life for many of us would never be the same.

I dare say that for many UNM students, especially those from rural areas, their first tastes of Greek cuisine occurred at the Olympia Cafe on Central Avenue. The Olympia Cafe is a venerable elder statesman among UNM area restaurants, launching in 1972. That’s when Spiros and Marina Counelis began serving Greek cuisine directly across the street from New Mexico’s largest university. In 2009, Spiros finally embarked on a well-deserved retirement–which lasted less than a year before he and his family launched Zorba’s Fine Greek Dining in the Heights Village shopping center at Montgomery and Juan Tabo.

The Olympia Cafe was purchased by Charles Akkad who, for the most part, continued in the traditions established by his predecessor. The greatest change Akkad made was in expanding operating hours. Olympia is now open Monday through Saturday from 11AM to 10PM and on Sunday from 12PM to 8PM. It’s a more accommodating schedule for those of us who neither live nor work in the UNM area. Alas, in preparing this review, I came across a “Go Fund Me” page to save the Olympia Cafe which has apparently suffered severely from the erosion of business wrought by the ART project.

Even the thought of losing the Olympia Café sends shudders down the spines of the many loyalists this café has cultivated over the years. It seems imponderable that one could drive Route 66 and not be greeted by the unmistakable aromas of well-seasoned Greek cuisine wafting onto Central Avenue. Those aromas are not only a welcome respite from the choking haze of automobile emissions, they’re a prelude to deliciousness. Step into the restaurant and the first thing you see is a counter in which you place your orders. The specials of the day are scrawled on a slate board on a restaurant wall while the daily menu is situated just above the counter.

After the aromas, the next thing you’ll notice is the restaurant’s liveliness. During lunch hour rushes, the Olympia Cafe is bustling with activity. A salvo of orders is quickly filled by a well-practiced kitchen staff. It doesn’t take very long. Insofar as ambiance, picture lots of Mediterranean blue touches. In the front dining room a life-sized mural depicts a pulchritudinous athlete setting a torch alight. Seating is more functional than it is comfortable.

You won’t be seated long before your number is called and you can walk to the counter to pick up your order. Portion sizes are prolific. It may take two of you to carry back the serving trays and their bounteous loads. That’s especially true if you order one of the restaurant’s terrific appetizers and a dessert, too. The best way to maximize your experience and appreciation of Greek cuisine is by ordering one of the menu’s combination combos (there are three combo platters on the menu, including one vegetarian). The most diverse of those combo platters is the Olympia Platter, a combination platter of Moussaka, Pastichio, Gyros meat with tzatziki sauce and dolmathes. A small Greek salad replete with feta cheese is also part of this platter.

Pastichio might be described as the Greek answer to lasagna. It’s a baked macaroni casserole layered with ground beef and topped with cheese and a cream topping. All too often this entree is surprisingly dry, sometimes the byproduct of over-heating. That’s not the case at Olympia where it is moist and delicious, even tasting made to order. Another casserole dish on the Olympia combo is Moussaka, a baked eggplant and ground beef casserole also topped with a cream sauce. Moussaka is a very common dish in the Mediterranean region, but it’s vastly different in every country in which it is served. The Greek version is my favorite. Made correctly, the filling has a smooth and rich consistency and the eggplant is baked to perfection (not an easy feat). Undercooked eggplant may leave your mouth with a metallic taste sensation that can last for hours. At Olympia, the sole sensation you’ll experience is the desire for a second portion.

6 September 2017: Perhaps the most popular entree at the Olympia Cafe as at other Greek restaurants are gyros, slices of beef and lamb broiled on a vertical split then wrapped in a pita with tomatoes, onions and tzatziki sauce. The beef and lamb amalgam is moist, tender and very well seasoned, but what enlivens it with flavor is the tzatziki which is made of finely chopped cucumber and dill and mixed with natural yoghurt. There’s a tinge of sweetness to the yoghurt along with the fresh, cool taste of the cucumber that goes very well with the meat. If anything, we would have appreciated even more of the tzatziki.

In its annual food and wine issue for 2013, Albuquerque The Magazine awarded the Olympia Cafe a hot plate award for its chicken souvlaki. Hot plate awards are accorded annually to some of the city’s most delicious dishes as seen by the magazine’s editors and staff. The magazine describe this dish as “fit for the gods.”

If you have any room left over, dessert options abound. My favorite Greek dessert even though I’m still not able to pronounce it is Galatoboureko, baked custard between crisp phyllo topped with a light honeyed syrup. The custard is rich and delicious but not at all cloying. Galatoboureko is a Cypriot delicacy and one of the best desserts anywhere.

If your own life broadening experiences have yet to include Greek cuisine, the Olympia Cafe is a great restaurant in which to experience one of the world’s first and most delicious cuisines.