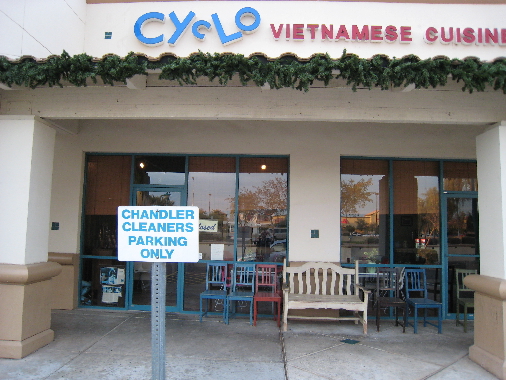 Ultra-chic owner, captivating chef and hostess extraordinaire Justina Duong has the perfect personality to run a successful, cutting edge restaurant. Effusive, charming and gracious, she makes you feel at home in the restaurant she launched in late 2002 and has become as much a draw as any of the wonderful cuisine she offers.

Aside from the siren Justina, what makes Cyclo so extraordinary is a menu in which the cuisine of Vietnam isn’t so much presented as it is celebrated. Cyclo isn’t so much high end as it is high energy. It’s a dining experience to be savored as your taste buds become a erogenous zones for explosive tastes that awaken, arouse and energize.

Both the New York Times and Gourmet magazine have taken notice and it goes without saying that Cyclo has garnered every local periodical’s “best Vietnamese” award. During my own first visit, I had the unique honor and privilege of inaugurating two friends to their first experience with Vietnamese food. They trusted me enough to order our entire meal. Fortunately, neither the appetizers, entrees or desserts disappointed in the least. In 2006, I also introduced a vegan friend to the joys of Vietnamese food and Cyclo was more than up for the challenge.

Amazing appetizers range from sublimely wonderful to absolutely magnificent and one of the good things about taking a friend to Cyclo is that you’ll more quickly sample all of them. Picking a favorite is akin to selecting your favorite star in the night sky. The beef Capriccio (thinly sliced, near raw beef with Vietnamese coriander, pineapple and sesame crisps) is perhaps the best I’ve ever had anywhere. The spicy garlic chicken wings put their Buffalo counterparts to shame. The tamarind glazed pork short ribs with Thai basil, egg rolls with red leaf and mint are phenomenal. Even normally pedestrian fresh spring rolls with grilled pork and shrimp are elevated to extraordinary heights.

If pressed to recommend just one appetizer, it would have to be Cyclo’s green beans, long and tender beans with a crisp snap to them when you bite down. These are no ordinary beans, however. They are laden with garlic, chili, soy sauce and pepper to imbue them with invigorating, tongue tingling tastes and an olfactory arousing bouquet. You might want their smoky aftertaste to linger long after you’ve finished these verdant vegetables.

Cyclo’s entree options present a pantheon of perfectly prepared, wonderfully memorable Vietnamese classics. The mixed grill featuring grilled marinated pork chop, beef, shrimp and a fried egg over fluffy, broken rice exemplifies how this dish should be served. Not uncommon in Vietnamese restaurants, mixed grill is generally good, but Cyclo’s anise blessed version is extraordinary…so much so that I’ve had it three times.

Fortunately in dining with friends, I’ve had the opportunity to sample other entrees (such as the aptly named Hong Kong beef chow fun with scallions, sprouts and soy). In each case, I purposely selected appetizers, entrees and desserts to display the versatility and distinctiveness of Vietnamese cuisine. In true testament to my success in picking the right entrees (or more likely, Cyclo’s incomparable kitchen), not a single morsel has ever remained.

For dessert, your options are equally superb. In season, the fresh mango and black sticky rice is the quintessential Vietnamese/Thai dessert with the sweet, tart freshness of fruit and the sweet, savory taste of rice drenched with even sweeter coconut milk. It’s phenomenal. During two visits, I’ve also had a small dish of French inspired jasmine creme brulee which was undoubtedly the best creme brulee I’ve ever had the pleasure of eating.

Cyclo is one of the very best reasons to sojourn to Phoenix and I would probably pedal a cyclo 400 miles plus to get there.