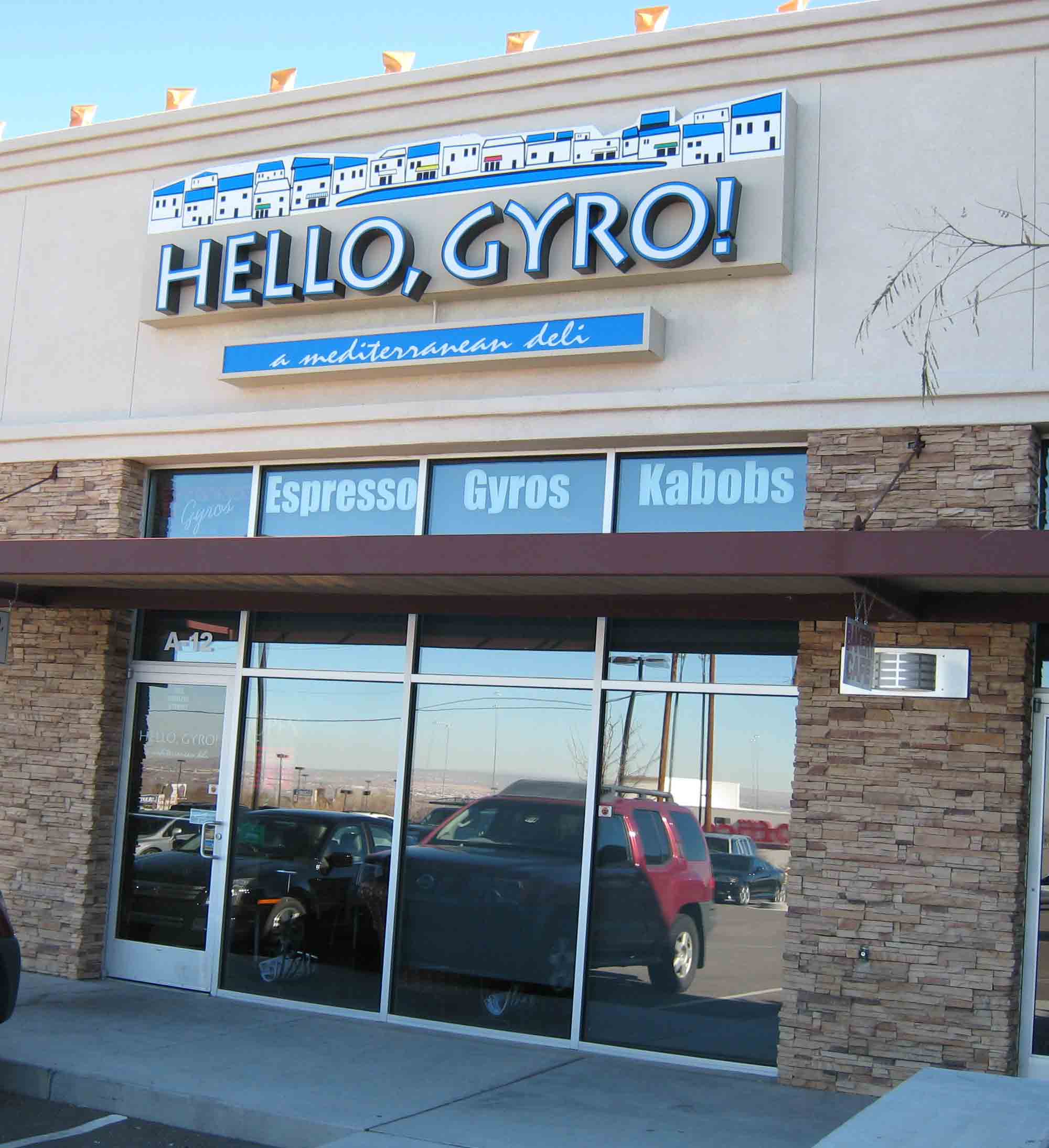 Many scholars and historians consider  the ancient Greeks to be the germinal culture and progenitor of Western civilization as we know it.  Greek civilization has been immensely influential in the arts and sciences, politics and language, philosophy and education.  It may surprise you then to learn that what many consider the archetypal Greek dish is, in chronological terms, a relative newcomer to one of the world’s oldest civilizations.

There is no historical source to prove definitively that the gyros were first made any earlier than the 1950s when they are believed to have been invented in Livadia, a city in central Greece.  The first souvlaki on a wooden stick, by the way, was also invented in Livadia at about the same time.

As it has done throughout its history, the venerable Greek culture shared its new creation with the rest of the world.  The Chicago area was the first American region introduced to gyros more than forty years ago.  Their popularity has grown like wildfire throughout the United States.

Gyros refers not only to the thin, stacked slices of meat that rotate slowly on upright spit, but to the cooking process itself.  In Greek, gryos actually means “a full turn,” a reference to the rotation of the meat on the spit one full revolution.  The electric bars behind the spit generate heat which melts the fat which drips from the bottom end of the spit onto a drip pan.  As it rotates on its spherical axis, the fat “cone” of meat becomes nicely brown and slightly crisp.  That’s an important point on which I’ll elaborate a bit more later on.

In Greece, an order of gyros with pita precipitates an exhibition of prestidigitation as the cook deftly sharpens his knives and with hands quicker than the eye, shaves thin strips off the cooked outer surface of the gyros.  The meat is nestled in a warm grilled pita where its heat is balanced with cool chopped tomatoes, onions and yoghurt sauce.  It is sheer, delicious beauty.

In America, gyros are typically made from an amalgam of sliced lamb and minced beef or sometimes just beef.   Chicken is a fairly common alternative with some diners even  daring to serve a “fish gyro,” both of which by definition are misnomers.  One such diner is Albuquerque’s Hello Gyro! which opened in the summer of 2008.

Hello Gyro! is a sister restaurant to the popular Hello Deli which has served the Duke City since 1985.   Its Web site invites you to “encounter the timeless art of the Greek dining experience,” touting “traditional family recipes that have been passed down from generation to generation.”  The restaurant is ensconced in a relatively new strip mall on San Pedro just south of Paseo del Norte.

It is a smallish diner smartly appointed with modern trappings such as exposed ductwork.  The counter at which you order is done in mosaic patterns.  Framed photographs showcasing the topography of Greece adorn the walls.  The deep azure gradation of the Mediterranean is perhaps matched only by New Mexico’s skies.  One photograph, to your left as you order, is of Graecian mountains which at a quick glance might be mistaken for the Sandias.

You have to crane your neck a bit to read the menu which is positioned above the counter.  It’s a pretty comprehensive menu of what might be considered Greek fast food.  It’s arranged in categories of entrees, pitas, salates, soupas, sides and glyka (dessert).

If you picked up the 2008 edition of Albuquerque The Magazine’s “Best of the City” issue, one entree you’ll be tempted to try is the Dolmades Avgolomono, grape leaves stuffed with beef and rice then topped with an egg lemon sauce.  These dolmades earned an “Editors’ Pick” award for “Best Dolma Delights.”  The magazine called them “simple, purely perfect Mediterranean masterpieces.”  My dining companions and I called them a let-down.

Similar to dolmades at several other Albuquerque Greek restaurants, these are obviously not homemade.  If you’ve ever had homemade dolmades (such as at Mykonos on Eubank), it’s hard to settle for anything less than the invigorating freshness and flavor enriching spices you get from homemade.  The Avgolomono on Hello Gyro!’s award winning dolmades is also a bit of a downer with barely any discernible lemony flavor.

As for the entree named on the marquee, the gyros are good, albeit lacking in the slightly crisp edges that typify meat shaved from the outside of the meat cone.  That might be because during our two visits the spit wasn’t rotating.  In any case, the meat was tender and well seasoned, but if you like a little crispiness, too, you might be a bit disappointed.   A thinly sliced lamb and beef amalgam is layered on warm (maybe slightly under-grilled) pita bread with ripe tomatoes, red onion and homemade Tzatziki sauce.  It’s such a moist sandwich (courtesy of the Tzatziki sauce) that the pita is challenged to hold it all together.

The gyros sandwich is offered with your choice of a garden salad, Avgolomono soup, orzo or Greek potatoes.  The garden salad is constructed of Romaine lettuce, tomatoes, cucumber and red onion with your choice of dressing (the house Greek dressing is a stand-out).  The Greek potatoes are boiled and tossed with garlic, oil and lemon juice.  They’re also quite good.  The only side which didn’t win us over is the Avgolomono soup which, honestly, reminded me of a chicken and rice soup barely tinged with lemon.

A nice alternative to gyros is a pita-based sandwich called the Spartan, a grilled marinated chicken breast topped with feta cheese, Romaine lettuce, ripe tomato and red onion all nestled on soft, warm pita bread.  The chicken breast is grilled to perfection and its radiant heat melts the feta into a complementary sauce.  The red onion imparts a slightly sweet flavor that cuts the sharpness of the feta.  If anything, this sandwich may be better than the gyros.

The glyka section of the menu includes many traditional Greek desserts such as baklava and one which isn’t as common in Albuquerque’s Greek restaurants.  That would be Kataifi, shredded filo dough baked with walnuts and cinnamon and covered with a sugar honey syrup.  It is a very rich, absolutely delicious dessert which puts an exclamation point on a good meal of Greek delicacies.

Since opening Hello Gyro! has earned a phalanx of fervent fans, most of whom return frequently to what has become a gathering place for good Greek food.