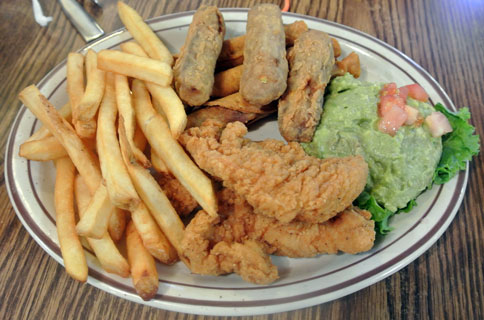 In Mark 6:4, Jesus instructs his disciples that “a prophet is not without honor except in his own town, among his relatives and in his own home.” Theologists and Bible scholars have translated this to mean “A prophet is honored everywhere except in his own hometown and among his relatives and his own family.” While certainly not as venerated as prophets, this verse could also apply to some of our local restaurants. If ever you’ve heard a disparaging word about one of our local restaurant institutions, you’ll know of what I speak.

Think of all the times you’ve heard such august Duke City institutions as Lotaburger and Mac’s Steak in the Rough disparaged by locals who didn’t grow up with these sacrosanct traditions. For every one of us who revere and frequent these local treasures, there may be as many (if not more) nay-sayers with antipathy toward those lionized local treasures. Some yearn instead for such big city sophisticates as In-N-Out-Burger and others of that ilk.

Forgive me if my retort and admonishment to locals who would deprecate our local treasures sounds too much like the jarring and insensitive statements used by some parents to get persnickety children to eat. The truth is, there are many people throughout the fruited plain who would love to have restaurants such as Lotaburger and Mac’s Steak in the Rough in their cities. They don’t understand the uppity New Mexicans who bad-mouth the local gems many of us take for granted.

Think I’m kidding? In 2006, Lotaburger was recognized by National Geographic for serving the “Best Green Chile Cheeseburger in the World.” In June 2012, National Geographic also ranked Lotaburger fourth on its “10 Best Hamburgers in America” list. In 2010, Gustavo Arellano, the brilliant and hilarious author of Ask a Mexican, a widely syndicated newspaper column published mostly in weekly alternative papers, asked the question “Forget Five Guys Burgers: Why Can’t We Get a Blake’s Lotaburger.” There are more such testimonies, but you get the picture.

As for Mac’s Steak in the Rough, in 2013 Thrillist named it “one of the best drive-in restaurants in America.” Mac’s largest advocate with a national profile, however, appears to be The Huffington Post, an online news aggregator and blog. In naming Albuquerque one of “5 American Cities You Should Visit in 2015,” the Post advised “Go for the insanely good chicken-fried steak fingers at Mac’s Steak in the Rough.” Two years previously, Post writer Rebecca Orchant wrote a feature entitled “Mac’s Steak In The Rough: An Albuquerque Original We Adore.” Admittedly Orchant grew up in Albuquerque so she’s intimately familiar with Mac’s. In fact, her experiences and sentiments pretty much mirror those of many locals who also love this Duke City institution.

In her article, Orchant describe Mac’s Steak in the Rough as “an old-school, drive-in, fry-shack of a restaurant, that has been slinging taquitos, onion rings and Steak in the Rough for over fifty years.” She shares her experiences of visiting Mac’s with her dad and being introduced to “limeade so sour it will cross your eyes” and “dipping steak fingers in hot sauce sitting on the hood of a car.” If you grew up in Albuquerque, you can certainly relate and even if you didn’t absolutely love Mac’s food, you undoubtedly enjoyed the experience…and that lip-pursing limeade.

In its halcyon days, Mac’s Steak in the Rough had about a dozen restaurants strewn throughout the Duke City. As much as the restaurant has long been associated with Albuquerque, Mac’s actually got its start in Artesia way back in 1949 when a restaurant impresario named Dave McCarty launched the first of what would become a beloved local empire. McCarty also invented and trademarked the “taquita,” a rolled taco that’s remained one of several menu standards over the years.

Today only the Mac’s Steak in the Rough on Menaul just east of Washington and a satellite in Rio Rancho remain. At its heart and essence, it’s still a drive-in and it’s still a dive. Traditionalists eschew the antiseptic modern indoor restaurant and opt instead to dine in the elements. That means parking your motorized conveyance under a canopy of parking spots and placing your order on an intercom built into each menu board. Remodeling and modernity included the replacement of a message board with an LED sign as well as replacement of the trademark sign pole.

Detractors will argue that each meal at Mac’s Steak in the Rough should come with its own angioplasty and maybe a beach towel for wiping your mouth. To supporters, however, Mac’s high-calorie, high-cholesterol, high-fat fast food menu is just what the doctor prescribed. You can get burgers, fries and shakes anywhere. Only at Mac’s Steak in the Rough can you have the name on the marquee. That would be the original steak in the rough, described as “tender slivers of ranch-cut beef cut fresh daily, dipped in our special batter and deep-fried.”

Similar to fried clams in New England, the original steak in the rough is served in a cardboard box, one accommodating not only the four crispy steak strips, but a mound of French fries, a hot roll, white gravy, coleslaw and a single fresh green scallion. It’s a combination you can only get at Mac’s Steak in the Rough. It’s ours and we’re proud of it. The steak in the rough is nearly hot enough to singe your fingers as it arrives at your table. So is the mildly peppery white gravy. The coleslaw is virtually saturated in a creamy mayo and is very sweet. The green scallion is one of those perplexing adds that seems out of place until you sample it with the steak fingers where its strong bite serves as a perfect foil for the battered steak.

Burgers provide a nice alternative to the steak in the rough. The four burgers on the menu are made with 100 percent USDA ground beef and are served with mustard, onion, lettuce and tomato unless you opt otherwise. The beef patties are a bit on the thin side and unless you request otherwise are prepared at medium-well to well. For the right-sized ratio of beef to bun, you’ll want to request double meat on your burger as well as green chile. The chile isn’t especially piquant, but it’s got a good flavor. As green chile cheeseburgers go, this one is much better than other notables.

So are the onion rings. They’re not the out-of-a-bag variety most restaurants serve (you know–the ones with the sandpaper-rough breading; the ones where you take a bite and the entire onion slides out, leaving you an intact shell of breading. Mac’s onion rings are reminiscent of those served along New Hampshire’s beaches. They’re lightly coated with a golden breading over sweet, juicy Spanish onions. These are onion rings the way onion rings are supposed to be: hot, delicious and addictive. Alas, on occasion the onion rings are occasionally fried too long and may be a bit dry. As with any meal you have, they’re best washed down by Mac’s limeade, the very best in Albuquerque.

One of the menu items that started it all for Mac’s Steak in the Rough is the Taquita Tusum, two crisp taquitas served with a guacamole salad and hot sauce. The menu indicates the taquitas are made with 100% ground beef, but you’ll be hard-pressed to discern any ground beef. Texturally, the amalgam with which the taquitas are stuffed is similar to moist, mashed beans. What you will discern, however, is cumin and not even the hot sauce and guacamole can mask that distinct spice.

Mac’s Steak in the Rough has been going strong for more than sixty years with no surcease in sight. Even though its operations have been centralized to one single location, it stands at the ready to ensnare the hearts of even more generations of Duke City diners.

10 thoughts on “Mac’s Steak in the Rough – Albuquerque, New Mexico”