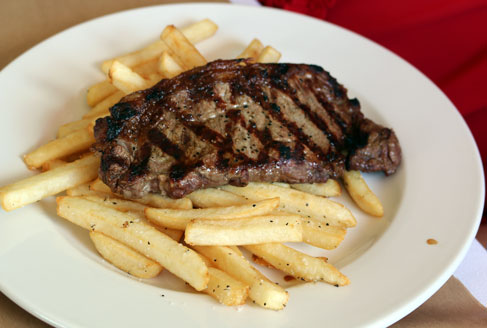 Thematically, it’s usually pretty easy to tell what some restaurants have to offer. Seafood restaurants, for example, tend to have nautical-themed “tells” such as fish nets, buoys and oars designed to evoke the salty, briny look and feel of the sea. The “template” for barbecue restaurants seems to include red and white checkered cloth tablecloths adorning oak tables, cute ceramic pig figurines on the counters and country music blaring from a tinny stereo. Irish pubs typically are accentuated with dark woods and perhaps more importantly, Guinness draft imported directly from Dublin where it is brewed.

By design and deliberation, the overarching concept of theme restaurants touches the architecture, decor, music, menu and the overall “feel” of the place. Unfortunately, in far too many cases the food appears to be a secondary consideration, taking a backseat to the faux and fantasy of all-encompassing theme. Much like an amusement park, the theme often brings in customers based solely on their expectations for an implied experiential premise (we’re so easily entertained).

On Washington, about half a mile south of Central, stands a curiously out-of-place edifice that can only be described as barn-like. (albeit sans weather vane). There is no exterior signage that tells you what this “barn” actually houses though its pristine exterior certainly seems to indicate it’s probably not an abode for Albuquerque’s most pampered bovines. Even when you find out this barn is home to Kasey’s Restaurant & Pub, you’re still at a loss as to the type of food offered. Is it grub or is it cuisine? Is it barbecue or is it steak?

Set foot in the premises and you’ll find yourself in a swanky milieu with white linen tablecloths and folded napkins on every table. You can also opt to sit at the generously appointed bar which features, get this, wine from the tap, Albuquerque’s largest selection. If you’re thinking wine from the tap is just a step up from Wal-Mart wine-in-a-box, co-owner Gary Lange will assure you it’s good stuff that’s already won over some of the Duke City’s (my words, not his) wine snobs.

It’s not until you peruse the menu that you begin to discern what Gary and his lovely better half Casey Armstrong-Lange have in mind for the restaurant they launched in December, 2014. And, it’s not until you discuss it with them that you recognize the passion they share. Even then, it may not be until you see a server pass by you with a tray of skyscraper-tall burgers that you truly appreciate that passion. It’s a passion for the community they love and the food they lovingly prepare and serve Duke City diners. They procure beef from Deming and hand-cut every steak. They also grind their own hamburger. The quality shows.

Gary and Casey were destined to own and operate their own restaurant. Before they were married, Casey actually worked for Gary as a chef for the Norwegian Cruise Lines where they rarely had time to luxuriate in the Hawaiian waters where they were ported. The couple later worked together at a resort in the Denali National Park in Alaska and in Oklahoma before launching their restaurant venture, their first as owners. A culinary arts graduate of Johnson & Wales University in Rhode Island, Casey helms the kitchen while the peripatetic Gary runs the front of the house.

The barn? Well, they sort of lucked into that. The building is actually owned by Casey’s father and uncle. Over the years, the edifice has served as an aquarium store, a bridge club and even a chicken restaurant (now, that makes sense). It took more than four-months to renovate the building into the spic-and-span state in which it stands today. At first browse of the pristine interior, you may even forget about the farm animal jokes with which you were going to regale the wait staff.

The lunch menu offers a nice variety of burgers, sandwiches, salads, soups and even a couple of steaks. The aforementioned burgers are artwork on a plate and they’re pre-announced courtesy of an aroma that may leave you drooling. The sandwich menu includes such rareties as a chicken banh mi and pork belly tacos. Lest I forget, the appetizer menu includes red chile pulled pork egg rolls which are one of the restaurant’s early run-away hits. The restaurant menu dresses-up a bit for dinner with an appetite-whetting selection of steaks prepared in your choice of butter. Dinner entrees also include braised short ribs and much more.

1 March 2015: Our inaugural visit to Kasey’s was on a Sunday in which brunch was the featured fare. The brunch menu is somewhat limited and doesn’t include appetizers. Limited, however, doesn’t mean you won’t find something you’ll enjoy. For some, it will be the fried chicken and waffles, a seemingly de rigueur brunch standard. My Kim orders this combination virtually every time she sees it on a brunch menu, but rarely is she pleased. Kasey’s rendition is the best she’s had. The pumpkin waffles are extraordinary light and absolutely sumptuous. They’re slathered with a tangy strawberry butter that tempers the sweetness of the syrup and melds well with the waffles. The fried chicken is three triangular shaped chicken breasts. It’s a very moist and very tasty chicken despite a rather thick coating.

1 March 2015: Stardust is believed in some cultures to have mystical and magical qualities. We wondered if those qualities extended to a breakfast sandwich named Stardust (English muffin, mushrooms, filet medallion, over easy egg, Bernaise) with a side of breakfast potatoes. It’s a very good sandwich though because of the runniness of the egg, you’ll eat it with a knife and fork and not like a sandwich. The filet medallion is especially good though somewhat on the thin side. The breakfast potatoes are little cubes of nicely fried potatoes.

14 March 2015: Eschewing the tempting red chile pulled pork egg rolls takes a lot of willpower, but in a fit of madness we did just that, opting instead for Pate Maison (chicken pate, cornichons, caramelized onions, baguettes). The pate is smooth and deeply flavorful. It spreads lusciously on the lightly toasted baguettes (a welcome change from too many overly toasted, dry baguettes which tend to overwhelm the flavor of pate). The caramelized onions are served cold and are probably better as a side than served atop the pate. Seriously, you don’t want anything coming between you and that pate, except maybe that lightly toasted baguette. Cornichons, as always, are a terrific foil.

14 March 2015: The lunch portion-sized New York strip is a slab of beautifully glistening beef prepared to your exacting specifications. Order a steak at medium and that’s what you’ll get at Kasey’s. At nine-ounces, the New York strip may not be the beefy behemoth carnivores crave, but for sheer deliciousness, it doesn’t take a backseat to its thicker brethren. It’s served with a side of steak fries which do a great job absorbing malt vinegar (no ketchup for us).

14 March 2015: My last experience with a coffee-rubbed steak was at Bobby Flay’s Mesa Grill in Las Vegas, Nevada. It left a rather indelible impression on me so when we espied it on the menu at Kasey’s, it was a foregone conclusion we would have to order it. The flank steak is grilled and sliced into small strips similar to roast beef. It’s an even better steak than the New York strip. We suggested to Gary that he find a way to bottle the coffee rub and serve it as a sauce even though a more prominent flavor is a Balsamic reduction drizzled on the steak. The steak is moist, tender and delicious. The accompanying mashed potatoes are, well, they’re mashed potatoes. Much better, if fortune smiles on you, is spinach sauteed in butter and garlic. It’s good enough to convert even avowed carnivores.

22 February 2016: According to the National Turkey Federation, in 2013, more than 240.0 million turkeys were raised, of which more than 200 million were consumed in the United States. Three holidays account for nearly half the turkeys enjoyed across the fruited plain: 46 million were eaten at Thanksgiving, 22 million at Christmas and 19 million at Easter. Despite a very active lobby, the turkey has not made significant inroads as “the other white meat.” Perhaps that would change if more Americans were introduced to the turkey burger at Kasey’s. Though it is not “ground in-house from New Mexico grass-fed turkeys,” my server assured me the turkey was procured locally. Ground and shaped into a round patty, the turkey is terrific, a good half-inch thick and covering the bottom bun. Only three ingredients come standard on this burger: fig mustard, pickled onions and brie. To add anything else would be to desecrate a bastion of deliciousness. The fig mustard packs a pop reminiscent of Dijonnaise. It pairs well with the sweetness of the figs and the tanginess of the pickled onions while the brie is a nice counterbalance with its savory richness.

22 February 2016: Burgers and sandwiches are served with your choice of sides: French fries, house-made chips, green chile onion rings, house salad or fruit. You know you’re from New Mexico when you read no further than “green chile onion rings.” My server told me it’s one of Kasey’s most popular sides. Though you’ll probably be offered ketchup with these pearlescent orbs, you’ll want them naked—sans ketchup, mustard or any other saucy ameliorant. These onion rings are most definitely not the “out-of-a-bag” variety virtually every burger joint in town serves. The onions are of varying size and thickness with an uneven texture that bespeaks of being battered right before frying. Bite into them and the addictive flavor of roasted green chile makes love to your taste buds.

14 March 2015: Desserts are no afterthought at Kasey’s. In fact, you’ll be thinking about the whiskey caramel bread pudding long after your meal. What most nay-sayers don’t like about bread budding is it can be more than a bit cloying, maybe even tooth-decayingly sweet. Kasey’s tempers their bread pudding with a Jack Daniels whiskey and caramel sauce and a single scoop of vanilla ice cream. The combination is a winner.

If luck or design takes you down Washington Avenue and you espy Kasey’s, you no longer need wonder what the barn-like structure houses. What you should wonder instead is whether you’ll be having one of those beauteous burgers, a sumptuous sandwich or a nicely-priced steak. You’re sure to find something you’ll enjoy.