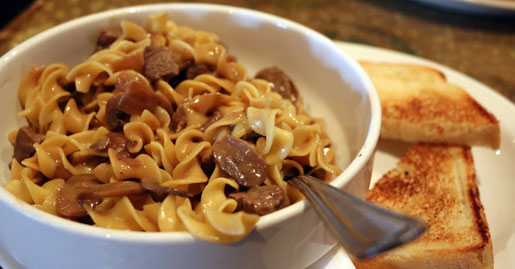 The quaint names given to English pubs are sometimes nearly as interesting as the reasons for which those names were bestowed. Take for example what is arguably England’s oldest pub, the Trip to Jerusalem. Built into the rock face under Nottingham Castle, the brewhouse has been offering sustenance and sanctuary to weary sojourners since before 1189. The genesis of its name comes from the fact that the inn served as a travel lodge in which crusaders relaxed–no doubt with a pint or eight–before heading off to battle the Saracens in the Holy Land.

Thee Fat Squirrel Pub & Grill in Rio Rancho, which launched in 2008, explains the genesis of its name this way: “The name Fat Squirrel comes from the old Turtle Mountain days. One of the brewers discovered that a squirrel had been stealing the grain from the alley and by the dumpster after brews were done. Gorging on the spent grain, the squirrel quickly became so fat that she had a hard time running around the parking lot and had taken to lying on her belly in the shade under cars. After the first winter she returned with her babies for the free and easy meals. In the English pub tradition, we decided to name this restaurant after her and serve a namesake English style IPA that we contract with Turtle Mountain.”

No trip across the English countryside would be complete without the entertaining travel game of finding the most unique pub name–or even better, the name with the best double-entendre, It’s easy to go into the gutter with suggestively connotative pub names which I won’t mention here since this is a family-friendly blog. You’ll find some of the same double-entendre within the cozy confines of the Fat Squirrel.

The Fat Squirrel Pub & Grille is located on Southern Boulevard just a few blocks east of Rio Rancho’s most popular microbrewery, the Turtle Mountain. In fact, the Fat Squirrel occupies the location which once housed Turtle Mountain. Where the original Turtle Mountain was crowded and cramped (compared to a fraternity house basement by the Albuquerque Beer Scene blog), the completely revamped edifice is spacious, upscale and classy (and not just in comparison to its predecessor). The Fat Squirrel was founded and operated by Rico and Liz Ortiz until 2011 when Greg and Nicole “Nicky” Villareal became co-owners. Nicky is also the heart and soul of Nicky V’s Neighborhood Pizzeria, a West side institution.

The Fat Squirrel is patterned like an upscale English style pub. It is appointed with rich, dark oaks. The decor includes squirrel themed signage warning patrons to protect their nuts from the furry, long-tailed rodent for which the pub is named. Libation loving patrons might belly up to the penny bar (yes, a bar whose surface is covered in some 20,000 pennies) while guests wanting their favorite pub grub might choose to sit in one of the comfortable booths. Laminated maps of the United States festoon each of the tables in the booths. This would make Miss Teen South Carolina very happy because of her concern for people in our nation who don’t have maps and therefor can’t find the United States on a map of the world.

The Fat Squirrel has undergone some changes since Nicky V took over, but for the most part, the restaurant has retained the charm and personality which has made it a Rio Rancho favorite. A full bar menu now welcomes guests who enjoy adult beverages–guests such as the “Geeks Who Drink” who visit the Fat Squirrel on Tuesdays for some spirited trivia.

29 February 2016: The starters portion of the menu is intriguing and diverse with such unique offerings as schnitzel strips and a Southern favorite, fried vegetables (black and tan onion rings, pickle strips, mushroom caps). The fried vegetables are beer battered and served with a creamy ranch dressing made in-house. It’s an outstanding ranch dresssing. Quintessentially Southern, the pickles are not the small, thin-sliced brined dills the type of which you’ll find on burgers, but thicker, longer strips sheared from whole pickles. The batter is crispy and adheres well to the pickles as it does to the other veggies. The black and tan onion rings are excellent and even the mushroom caps are notable. While this appetizer may seem a bit anachronistic, a throwback to the 70s, the Fat Squirrel does such a good job with their vegetables that you’ll order them again and again.

8 January 2012: When we lived in England, we grew to love mussels steamed in cider (the hard stuff), but have yet to encounter that unique flavour combination anywhere in the colonies. White wine seems to be the most common agent used in New Mexico where it’s paired with anything from saffron to garlic to green chile. At the Fat Squirrel, Belgian style mussels–an entire pound of them–are steamed in beer and garlic butter with green onions, tomatoes and onions served with Parmesan crostini. The most prominent flavor notes are of saltiness, oft a consequence of cooking with beer. We also missed the fun and deliciousness of dunking soft bread into the broth. While the crostini reconstituted when dunked into the broth, it also broke apart.

15 October 2013: Sandwiches and burgers play a prominent role in the menu. All burgers are Angus beef, cooked to your desired level and served with your choice of French Fries, Coleslaw, Side Salad, or Black and Tan Onion Rings (for a pittance more). Lettuce, tomato, and onion served upon request at no charge. Burgers are available at third-pound or half-pound sizes. My favorite Burger is the El McGoldrick, named for my friend Larry McGoldrick, the professor with the perspicacious palate and an avowed burger aficionado. This burger is prepared “competition style” meaning it isn’t adorned with anything but beef, cheese and green chile. The patty is prepared on the flat top, topped with Cheddar cheese and roasted Hatch green chile, just the way Larry likes it. You can have extras if you’d like, but it’s a darn good burger just as Larry likes it.

13 December 2008: It seems most English styled American pubs serve fish and chips, but it’s a rare find whose fish and chips have a modicum of semblance to what you’d find in one of the thousands of fish and chip shops in the United Kingdom. Like many of those, the Fat Squirrel deep fries battered haddock filets and while they’re not quite like we were used to when we lived in England, they’re pretty darn good. For one thing, when your fork punctures the golden sheened beer batter, you actually encounter light, flaky and delicious haddock, not more batter. For another, the batter is crispy yet thin enough to allow good penetration from malt vinegar. You can ask for one, two or three fillets (you’ll want at least two). The Fat Squirrel’s fish and chips are the favorite of Bob of the Village of Los Ranchos, a frequent and valued contributor to this blog.

The “chips” component of choice in the fish and chips combination served in most American pubs seems to be French fries, usually out-of-the bag which means thin, desiccated and tasteless. Some American pubs serve steak fries which are thicker and larger than the chips served in the United Kingdom, but which offer little in terms of taste. The Fat Squirrel’s chips aren’t quite steak fries, but they’re thicker, more substantial and much better tasting than French fries from a bag. They’re also perfect hosts for malt vinegar.

30 September 2009: Fittingly, the quintessential English comfort food is also available at the Fat Squirrel. That would be shepherd’s pie, sirloin tips served with vegetables and gravy topped with homemade red-skinned mashed potatoes and Cheddar cheese. On the one instance in which I had this entry, the vegetables were slightly undercooked, but otherwise this dish has some semblance to shepherd’s pie we’ve had in England. My preference would have been for lamb or mutton, but the sirloin tips are tender and delicious.

8 January 2012: Jaegerschnitzel isn’t something we saw often during our frequent forays into British gastropub dining so it was a pleasant surprise to see the “hunter’s cutlets” on the menu. The breaded and pan-fried pork cutlet is fork-tender and perfectly prepared, but what makes Jaegerschnitzel special is the “hunter sauce,” variations of which usually make this dish an adventure. The Fat Squirrel’s hunter sauce is replete with chopped mushrooms in a tangy brown gravy. The Jaegerschnitzel is served with housemade red-skinned mashed potatoes and a smoky apple cabbage. We didn’t get much of the “smokiness,” but thoroughly enjoyed the sweet-tartness of the apple cabbage.

29 February 2016: Another anachronistic dish Fat Squirrel does very well is Beef Stroganoff, which has largely gone the way of such 70s terms as groovy, spaz and far out. There are probably fewer than a half dozen restaurants in the Duke City area that serve this dish which was so very popular in the 70s. A large bowl brimming with tender, chunky beef in a sour cream sauce with mushrooms and egg noodles will remind you why Beef Stroganoff was such a popular comfort food favorite throughout the decade. The noodles are buttery and delicious, but it’s the bite-sized bits of beefy deliciousness which evokes feelings of nostalgia among those of us who loved this dish in its halcyon days and continue to love it today.

A few visits to this Rio Rancho pub and grill just might have its guests resembling the well-fed Squirrel for which the pub is named.