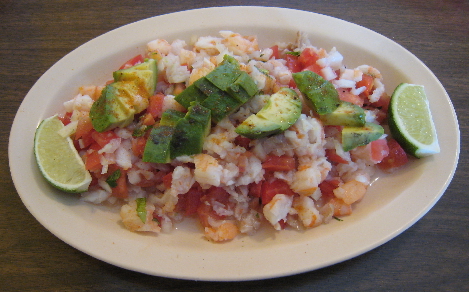 During the Mexican Revolution of 1910, many women joined the army both in response to the tremendous need for their service, but also to accompany their husbands, many of whom were conscripted into service.

Traveling with the revolutionary armies, it was often the role of women to forage for food and cook meals. As much as possible, the women who followed the armies tried to provide a homey meal experience complete with tablecloth, decorative plates and vases for flowers.

As soldaderas, their contributions to the Mexican Revolutionary were not limited to “traditional” roles of the time–serving as caregivers and as cooks. Many women distinguished themselves on the battlefield and are today remembered in such songs as La Adelita.

It was a bit of a disappointment not to see any of these women celebrated on the sunflower colored walls of Ruben’s Grill, a popular Northeast Heights Mexican restaurant whose walls are adorned with black and white posters of the heroes of the Mexican Revolution.

My favorite of the lot is a “Wanted” poster issued in 1916 by the Columbus, New Mexico chief of police who offered a $5,000 reward for the capture of Francisco “Panco” Villa.

History will recall that the only time a foreign army has invaded the United States was when Villa and his men stormed the city of Columbus. While the price on Villa’s head was substantial for the time, his raiders–Candelario Cervantes, Pablo Lopez, Francisco Beltran and Martin Lopez–warranted only a $1,000 reward.

One wall of Ruben’s Grill is festooned with a single unadorned Mexican sombrero, the kind worn by Mexican Revolutionary War hero Emiliano Zapata. Hung on another is an flamboyant velvet sombrero embellished with brightly colored patterns.

I don’t know whether or not the sombreros are intentionally meant to recall the class warfare that helped incite the Revolution.

What I do know is that Ruben’s Grill serves the type of food ordinary Mexican citizens would eat. For the most part it’s simple food as it might be prepared in the cocina of any campesino. That means no exorbitant ingredients or exotic spices. This is authentic food, too simple to be called cuisine.

The salsa, for example, is redolent only with the fragrance of Mexican oregano, jalapeno and smoked tomatoes. It is somewhat watery, only mild on the piquancy scale and has a slightly sweet pronouncement, but it’s a terrific salsa, the kind for which you return to Mexican restaurants. It deserves better than the chips which accompany it.

The chips are housemade, low in salt and crispy. They’re served warm and would have been delicious were it not for the fact that during our inaugural two visits, they were fried in old oil. Hopefully this is an anomaly, one of those Murphy’s Law things that everything goes right until you visit a restaurant.

As a gastronome, it’s easy to point out a restaurant’s blemishes–the glass is half empty approach. Ruben’s Grill is the type of restaurant you love warts and all. The many things it does well outweigh the few things about which complaints are usually rendered.

What complaints you might hear are likely going to be directed at the slow pace at which food orders are delivered. Ruben’s Grill is situated in a Lilliputian facility with very few tables and it’s heavily trafficked.

During peak times every table is likely to be occupied, so it’s not uncommon to see long lines of patrons lining up to place their orders to-go. Perhaps because of space constraints, the restaurant also seemed woefully understaffed during my two visits–a cashier who doubles as a waitress and a cook attending the grill. You may have to wait for your order to be fulfilled, but this is food worth waiting for.

One of the things worth waiting for is ceviche, a ship’s bounty of shrimp and fish “cooked” in citrus juice and served with chopped white onions, tomato, cilantro and avocado.

I always marvel at landlocked Mexican restaurants who serve ceviche that tastes fresh. Ruben’s ceviche has that taste. The shrimp don’t necessarily have the snap of just-caught shrimp, but they’re not exactly flaccid either. Best of all, their inherent sweetness still comes out despite being catalyzed in citrus juices. The other ingredients are similarly fresh tasting and delicious.

The menu includes many traditional Mexican favorites for breakfast, lunch and dinner. Dinner plates are served with beans, rice and tortillas and you can have a cup of soup for less than a dollar more. An entire page is dedicated to mariscos (seafood).

A popular option at any time are the tacos ala carte, hard or soft tacos with a variety of meat fillings: chicken, shredded beef, carne asada, carnitas, al pastor and chicharron.

Fresh ingredients–meats, white onion, cilantro and a hot sauce–are stuffed into soft corn tortillas, two per taco to prevent disintegration on account of the moistness of the ingredients.

These are excellent tacos, particularly the al pastor, the famous “shepherd” style pork tacos sometimes cooked slowly on a vertical rotisserie. Ruben’s marinade renders the tacos deliciously savory with a subtle hint of sweetness. The hot sauce then contributes a piquant touch.

It’s not all Mexican restaurants which can excel in both meat-based entrees and mariscos though many restaurants offer both. Aside from the aforementioned ceviche, Ruben’s mariscos menu includes several camarones (shrimp) plates, seafood soups and two seafood cocktails served cold–the Campechana (shrimp, octopus and scallops) and the Coctel de Camaron (shrimp).

Don’t hesitate to order the camarones al mojo de ajo, shrimp in garlic sauce, a terrific entree prepared as well or better than at restaurants specializing solely in mariscos.

If you’ve ever hesitated to order this entree fearing garlic’s tendency to overpower some dishes, you need not worry. The shrimp are seasoned magnificently in a buttery, garlicky seasoning that brings out the natural sweetness of the shrimp, not the strong flavor of the garlic.

The shrimp have just a bit of snap which signifies their freshness and are served in a bed of sweet, sautéed onions. Despite the garlic and onion, this is not a breath-wrecking, reeking out of your pores entree. It’s one of the better camarones dishes in the Duke City.

Escorting the camarones are delectable refried beans topped with melted Cheddar and small-grained rice. The beans are terrific and the rice, while somewhat desiccated, is salvageable if you mix it with the beans and scoop it up with “Mexican spoons” (corn tortillas).

Ruben’s Grill even entertains a departure into American foods, serving both a hamburger and a bacon burger, both of which can be ordered with cheese. Daily breakfast specials include traditional American breakfast dishes up to and including French toast and pancakes.

Breakfast special number three sounds as if it could come from one of the chain breakfast purveyors–two eggs, ham and your choice of pancakes or French toast.

This special is quite good save for the pancakes which are almost rubbery (at least during the visit in which we had them). Usually this is a function of the type of flour used or the way it’s treated. I surmise the pancake mix wasn’t stirred enough.

Beverages to wash down your meal include the usual fountain drinks plus cerveza and wine by the glass, orange juice, hot chocolate, coffee and hot tea. Forego those and try one of the aguas frescas–horchata, lemonade or tamarindo.

The horchata is as sweet as the leftover milk from a bowl of Captain Crunch, but it’s served cold and easily assuages any thirst.

Ruben’s is ensconced in a timeworn strip mall and is situated in the long time home of long gone Bugsy’s Subs.