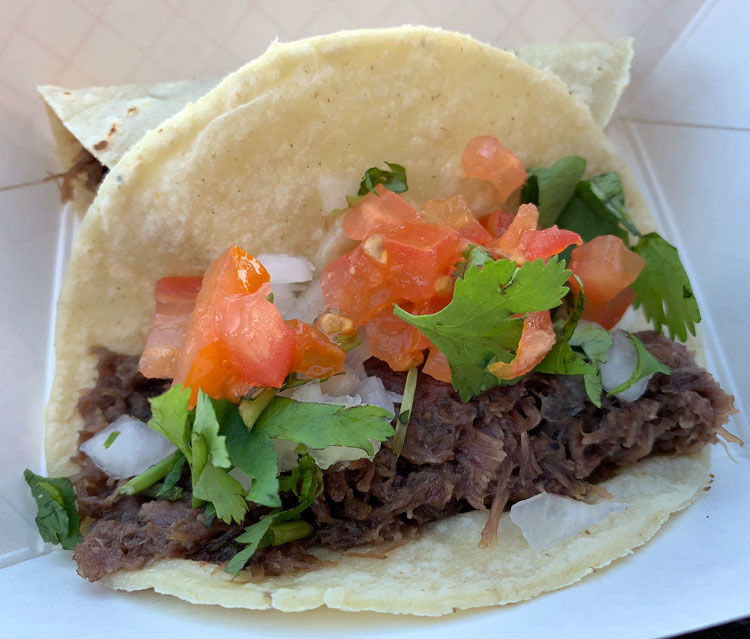 As chief of nonresident training for my career field, one of my favorite duties was working with other subject matter experts to develop “psychometrics” (specialty knowledge tests to measure promotion fitness) for the United States Air Force.  It meant an annual trip to San Antonio, Texas, one of my very favorite cities under the spacious skies.  In collaboration with civilian human factors engineers, four other senior non-commissioned officers and I pored assiduously over manuals, regulations, pamphlets and guides to compose unimpeachable grade-appropriate exams.  As challenging and rewarding as the experience was, my fondest memories are of time off-duty spent exploring the vast and diverse culinary opportunities San Antonio had to offer.

The San Antonio-based human factors engineers steered me toward some fabulous Texas specialties: chicken-fried steak as big as a truck tire at Good Time Charlie’s, amazing baby back ribs at Tom’s Barbecue and even green chile cheeseburgers at Chester’s.  They also led me astray several times, particularly when it came to their cumin-laden Tex-Mex cuisine. After discerning the no-win situation of getting me to acknowledge any merit whatsoever in Tex-Mex cuisine, they decided they might fare better if they introduced me to “authentic” Mexican food.  Exemplifying their interpretation of authentic were two dishes: rubbery tripe-based chicharrones replete with stiff pig bristles and barbacoa made from beef cheeks, tongue  and “other meats no one will eat.” Though I pride myself on being open-minded and acculturating easily, these “chicharrones” turned my stomach.

The barbacoa, on the other hand, completely won me over, especially when paired with Big Red, the creamy red soft drink invented somewhere in Texas back in 1937.  In parts of San Antonio, that pairing is as popular as burgers and fries are almost everywhere else.  It’s a marriage of soul mates, two seemingly disparate flavor profiles joining together to form a memorable and addictive combination.   Barbacoa and Big Red are truly the Simon and Garfunkel of Texas, a harmony of deliciousness.  The late Randy Garibay, a San Antonio native, celebrates all that’s great about pairing in his song Barbacoa Blues.

In subsequent years, I’ve had barbacoa (lots of it), but none has quite measured up to the tender, rich, fatty deliciousness mischievous-minded human factors engineers believed would gross me out, their revenge for the nasty things I said about their beloved Tex-Mex cuisine.  That is, none had measured up until my friend Chad Covey recommended I beat feet to Barbacoa El Primo, a smallish Mexican eatery on the southwest intersection of Zuni and Adams.  Barbacoa El Primo rekindled memories of the life-altering barbacoa I’d discovered so many years ago in San Antonio.  It’s at least the equal of the best barbacoa I’ve ever had!

“Wait,” you say, “didn’t you just tell us barbacoa is made from beef cheeks, tongue  and “other meats no one will eat?  How can anyone possibly declare barbacoa to be “the best” of anything?”  While it’s true that traditional barbacoa (especially the way some Mexican families in San Antonio prepare it) really is made from the head of a cow and all its parts cooked in a pit dug out in the backyard, that’s not necessarily the case with barbacoa served at some restaurants.  If you’re even a bit squeamish, you probably don’t want to ask.  Today most restaurants prepare barbacoa in a slow cooker where beef (not necessarily from a cow’s head) cooks all day long.  The resultant reward is beef so tender and juicy that it falls apart and practically melts in your mouth. That’s what you’ll find at Barbacoa El Primo.

Before we go any further, “primo” as used in the restaurant’s name does not translate from Spanish to “cousin,” but to “first” as in number one.  That audacious proclamation is reiterated in the “subtitle” under the marquee which reads “Simplemente la Mejor,” a term which translates to “simply the best!” Does it live up to its self-glossing?  Absolutely!  As of this writing (11 November 2018), it’s earned five of five stars on 22 reviews from Yelp critics.  More telling, however, is the genuine enthusiasm walk-up dining traffic has for this smallish place.  They order barbacoa by the pound and they’ll tell you it’s the best they’ve ever had.

Before embarking on their brick-and-mortar operation, the good folks who own Barbacoa El Primo operated a mobile food kitchen (that’s food truck for you, Bob) for about a decade.  They garnered such a loyal following that a more permanent structure seemed the most logical next step.  Barbacoa El Primo is located in an edifice that previously housed a LotaBurger.  It’s not exactly a sit-down restaurant though seating is plentiful, all of it outdoors on picnic tables.  Many of those tables are under an expansive overhang flanked on either side by parking spots from back-in-the-day when LotaBurger was a true drive-in.

Though the menu is rather limited–only one meat (barbacoa) and only four items: tacos, burritos, tortas and consome–possibilities abound.  From a toppings bar, you can garnish your order with as much fresh, chopped onion, tomatoes and cilantro as you want.  You can then squeeze a lime or two onto your creation if you wish.  Each table has plastic squeeze bottles with incendiary green and even more potent red salsas.  To wash down your barbacoa bounty, you can enjoy some of the best aguas frescas (melon, horchata or piña) in the metropolitan area or you enjoy several flavors of Jarritos, the popular Mexican soft drink.

Tacos, tortas, burritos and consome are the canvases on which barbacoa-based masterpieces are created and you’re the touch-up artist. The barbacoa is magnificent!  It’s tender, fatty, juicy, delicious beef that really needs no amelioration.  It’s swoon-worthy on its own and indeed, some guests order it by the pound and devour it by the forkful.  Most however, enjoy the make-your-own taco experience. It’ll take four or five tacos to make a meal for most of us caloric overachievers. The soft, warm corn tortillas are fashionably small, miniature envelopes in which the barbacoa is nestled. Dress your tacos the way you want, but make sure you at least try the two salsas. Mexican salsas tend to be pureed, much moreso than New Mexican salsas. These have real heat and should be used only in a “supporting cast” role. It’s the barbacoa that’s the true star.

For years Gil’s Thrilling… has been an unabashed cheerleader extolling the deliciousness of tortas, the incomparable Mexican sandwiches crafted on bolillo or telera bread.  You haven’t had a torta until you’ve had one with barbacoa at Barbacoa El Primo.  First, the bolillo is just slightly crusty on the outside and pillowy soft  on the interior.  It absorbs the juiciness of the seasoned beef which is generously piled on.   Admittedly, the barbacoa is so rich and fatty (in the best possible sense) that most of us will need to cut those qualities with the aforementioned garnishes and (or) salsas.  Anyway you have it, call it one of the best tortas you’ll ever have.

Sadly I’ve never had the opportunity to prove to my human factors engineering colleagues just how superior New Mexican cuisine is to their beloved Tex-Mex.  I have to believe they’d even consider Barbacoa El Primo’s barbacoa superior to the life-altering barbacoa to which they introduced me in San Antonio lo those many years ago.

Barbacoa El Primo is open from 7AM to 3PM Tuesday through Sunday.