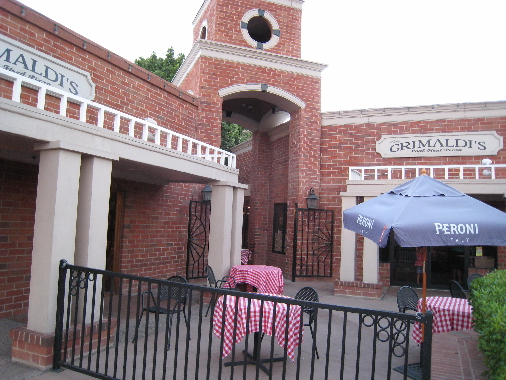 America’s most storied non-franchised pizzeria is Patsy Grimaldi’s in Brooklyn, New York.  Grimaldi’s can trace its pizza lineage to the opening of the very first pizzeria in America in 1905.

Alas, the distance and cost of traveling to New York made my visiting Grimaldi’s prohibitive.

Fortunately, Scottsdale, Arizona is much closer to Albuquerque by thousands of miles than is New York City.  As such, when Grimaldi’s opened its first franchise outside New York in mid-2003, I knew a pilgrimage to the transplanted shrine of pizza was inevitable.

My inaugural visit confirmed in my mind what pizza aficionados know–Patsy Grimaldi’s made some of the very best pizza in America, if not the world.

The smoky taste of this fabled pizza comes from coal-fired brick ovens weighing 25 tons and filled with 250 pounds of coal.  Creating a fiery conflagration scaling to 1,200 degrees, it cooked my pizza to perfection–crisp, chewy and absolutely fabulous–in less than three minutes.

Grimaldi’s pizza comes in only three sizes, a personal pan pizza (12″) a small (16″) and a large (18″) and with individual ingredients ranging in price from $2 to $4 (for the oven roasted sweet red peppers), it’s not a cheap pizza.  You get what you pay for and you’re paying for some of the very best toppings available.

Fresh mozzarella, a lively tomato sauce, Italian sausage and ham made it to my first pie which I ravenously devoured.  The mozzarella comes from free range cows.  On most pizza, mozzarella is a boring topping that just sort of lies there, but at Patsy Grimaldi’s, the mozzarella has a pronounced rich taste that I couldn’t get out of your mind.  It was simply incomparable!

Several years ago, in celebration of the 100 year anniversary of pizza in America, aficionado Ed Levine ate nothing but pizza for an entire twelve month period, taking a representative pulse of the best from among thousands of pizza purveyors.  His terrific tome, Pizza A Slice of Heaven, provides a definitive guide to a much-loved product that in its elemental form is simplicity itself–bread, cheese and whatever toppings a pizzaioli artisan might care to add.

Levine declared his favorite Grimaldi’s at the moment to be the one in Scottsdale, the very pizzeria that had ensnared my affections. Levine praised the “Latino pizza-making crew who are creating impressive, sparsely topped pies with pliant, slightly chewy crusts.”

That was in 2005.  Within two years, Patsy Grimaldi’s would also have two more stores in Arizona, one in Chandler and a second one in Scottsdale.  There is also a Las Vegas, Nevada franchise as well as one in Dallas, Texas (opened in November, 2007).

With that type of validation and my personal experiences, I bragged incessantly about the pizzeria in the desert that prepared perfect pies. Alas, as is apt to happen when you sing the praises of a restaurant, the nefarious Mr. Murphy raised his loathsome head the first time I took friends to Grimaldi’s.

In the two years between visits, the Old Town Scottsdale Grimaldi’s had metamorphosed from a pizzeria I dreamt about to a pretender not worthy of bearing its proud name.  It should have been apparent from the restaurant’s sparsity that something was amiss.

The transformation was most evident in the crust which seemed to have lost its pliancy and had assumed an uncharacteristic desert dryness.  The crust wasn’t quite cracker-like (more like Pizza Hut’s thin crust), but no longer did it easily fold vertically ala New York style.  Worse, the char that typifies great New York style pizza manifested itself in blotchy patches on the pizza’s bottom.

Patsy Grimaldi’s prides itself in being purists when it comes to pizza and with a heritage that can be traced to the very first pizzeria in America, it’s been crafting perfect pizzas for more than three quarters of a century.  I don’t know if he’d roll over in his grave, but don’t think Patsy would be happy with the pies being served in Scottsdale if my most recent visit is any indication.