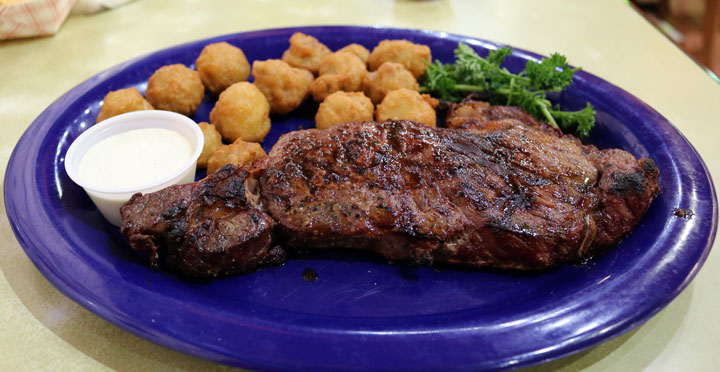 “I’m not telling you, ‘Never eat a hamburger.’ Just eat the good ones with real beef, you know,
like the ones from that mom-and-pop diner down the street, …
And it’s so good that when you take a bite out of that burger,
you just know somewhere in the world a vegan is crying.”
– Homer Simpson

America’s favorite everyman philosopher may have had The Grill in mind when uttering that pithy pearl. What, after all, is a burger if not the celebration of meat, a pulchritudinous beef patty sandwiched between glorious golden orbs and festooned with ingredients intended to bring out flavor combinations that dance on your taste buds? Made properly–personalized for taste to your exacting degree of doneness and with your unique choice of ingredients–a burger can elicit tears of rapturous joy among burgerphiles.

Though the corporate chains offer convenience and consistency (a boring sameness), few would argue that their copycat burgers could elicit raw delirium when bitten into. Cynics, like me, would argue that chain burgers aren’t even made with real meat, USDA definitions for meat be damned. No, my friends, it’s solely the bounteous burgers at your local mom-and-pop diners down the street that elicit the carnal cravings and libidinous lust that make you want to rush over to visit your preferred provider of meaty happiness with great regularity.

For Duke City diners one of the best the mom-and-pop diners down the street has a burger which just might elicit swoons of joy as it quells the most rapacious of appetites. It’s a burger that had Rudy Paul Vigil waxing poetic when he told me about it. An advocate of homemade tastes, Rudy is the guy who introduced me to Lumpy’s Burgers shortly after it opened so he’s got plenty of down-the-street burger cred with me. In describing The Grill, he expounded about a unique wood-firing contraption that imbues each burger with enchantment.

The Grill is the brainchild of veteran restaurateur Phillip “Phil” Chavez, a man who knows and likes burgers as much as he likes bussing, or at least that’s the impression you might get in reading the menu’s claim of “food so good, you’ll wanna kiss the cook!” Before opening The Grill, Chavez operated grill-oriented family restaurants in Gallup as well as Shiprock and Farmington.

The Grill launched initially on the far western fringes of the Duke City just east of 98th Street and was then called “Grandpa’s Grill.” From the restaurants east-facing windows you were treated to some of the very best views of the Sandia Mountains and downtown Albuquerque. At night, the panoramic view of the city lights were absolutely inspirational.  Alas, the location made for a rather lengthy drive for all but residents of Albuquerque’s West Mesa.

In July, 2011, Grandpa’s Grill moved to Menaul (next door to Jennifer James 101) and rechristened itself “The Grill.” The Grill remained on Menaul for nearly six years before relocating to much more capacious digs on San Mateo, a venue easily four times larger than its predecessor. Interior walls are festooned with thematic pieces–everything from kitchen related bric-a-brac to sports memorabilia. Much of it donated by patrons of the popular restaurant. Old-fashioned coffee makers, blenders and other appliances make for interesting reminiscences among us seasoned diners and for strange curiosities among the Y-generation crowd.

The most interesting period piece, however, is the restaurant’s signature grill. White hot and throbbing red embers of mesquite coals lay on a steel tray atop of which sits a metal grated grill which Chavez raises and lowers via a hand-crank. He’s mastered the art of temperature control to prepare your burgers and steaks to the level of doneness you specify.  It’s a contraption those of us who agree with Homer Simpson’s contention would love to have in our own kitchens

An old-fashioned burger fixings bar, complete with sneeze guard, hosts sliced tomatoes, pickles, mustard, ketchup, lettuce and onions which means you truly can have your burger your way. A deep metal serving tray holds salsa which you can ladle onto plastic ramekins. Another holds crisp, homemade (but excessively salty) chips, both free with each order.

The salsa is exceptional–as in so good it should be bottled good. It’s so good that properly pureed, it would make an excellent bloody Mary mix. It’s so good, it would make the the key component of a great gazpacho. It’s so good, you’ll eschew ketchup and dunk your fries in it. It’s so good, you’ll finish two or three trays of chips before your order is up. Seriously, this is good salsa. Its components are rather typical–tomatoes, onions, jalapenos, garlic, salt–but Chavez mixes each batch up in perfect proportions. The salsa is pleasantly piquant, not so incendiary you won’t be able to taste anything else.

You’ll definitely want to taste the burgers! Prolific eaters will opt for the Papa Burger, a whopping eight-ounces sure to sate hearty eaters. A six-ounce Mama Burger and a four-ounce Little Rascal Burger are also available. The beef patties are hand-formed and thick. You can top them with green chile and your choice of Cheddar, American or Swiss cheese. The buns are lightly toasted. More than any other burger in the Duke City, this one reminds me of a burger perfectly prepared over a campfire. That’s courtesy of Phil’s unique mesquite grill and the masterful manipulation of the mesquite coals. All burgers are available in combination with a drink and Fries.

18 January 2020: The Papa Burger with green chile is terrific, a true compliment to the grill master and his deft manipulation of temperature! The beef patty is imbued with the kiss of mesquite heat, but not so much that the usually acerbic grilling wood imparts its characteristic bitter aftertaste. The green chile is a bit on the mild side, but the other ingredients from the fixings bar are all fresh and delicious. Fries aren’t much to write home about, but they’re much improved when you dip them into the salsa instead of ketchup.  Rather than fries, ask for a baked potato which goes oh, so well with the burger.

18 January 2020:  The menu also includes an insanely low-priced sixteen-ounce Ribeye served with your choice of fries or beans and tortilla. Also available are a chicken breast platter, a chicken sandwich, a Southwest chicken sandwich (with green chile and cheese wrapped in a tortilla) and chicken strips with fries. Hot dogs, in either jumbo or regular sizes, with or without chile and cheese, can also be ordered. Deep-fried sides include French fries, fried zucchini, fried mushrooms and onion rings.

The Ribeye prepared at medium is too good to pass up. Ribeye tends to be a well-marbled and tender cut of beef that is well-suited to dry-heat preparation style. That means The Grill’s unique mesquite grill brings out the optimal flavor profile in this steak. Not quite fork-tender, the Ribeye cuts easily, juices flowing not quite copiously but enough. The only seasoning discernible is salt and pepper, but sometimes that can be enough. It is in this case. Value-priced means sixteen-ounces of steak for just over a dollar an ounce, a good deal by any standard. My Kim believes this ribeye is one of the best steaks in the city and questions why anyone would pay exorbitant amounts for steak elsewhere.  In its annual Food & Wine issue for 2018, Albuquerque The Magazine awarded The Grill a Hot Plate Award signifying the selection of its ribeye as one of the “delectable treats that are must-haves for any foodies.” Considering the thousands of potential selections, to be singled out is quite an honor.

The steak is accompanied by your choice of French fries or beans and a tortilla. At first glance, the beans look inviting, a hearty portion topped with shredded cheese, but as they approached our table, the malodorous emanation of cumin wafted toward us. As usual, I whined vociferously, urging our attentive waitress and Phil Chavez himself to take the beans and dispose of them at a nuclear waste dump site. Phil indicated 99-percent of his customers appreciate the beans, some even asking for the recipe…but I’m not crazy; everyone else is.

On the counter gracing your visage is a domed cake platter holding the delicious cake of the day. Fortune was with us during my second visit because the cake under glass on that day was a gorgeous red velvet cake. Red velvet cakes have been popular since the 1920s, experiencing a resurgence in the 1990s, but it’s never really gone out of style. Essentially not much more than a chocolate cake with a dark red-brown color and layered with a creamy white icing, it is beautiful to look at and generally delicious to consume. This decadent dessert isn’t prepared in-house, but you will want to take a piece home with you. Even better is the coconut-vanilla cake pictured.

The Grill is an anachronism–a throw-back to the 1960s with prompt, courteous, unobtrusive service and a genuine spirit of welcome from the owner. Ask Phillip Chavez for a tour of the kitchen and he’ll gladly show off his unique grill, the contraption which makes some of the very tastiest burgers in Albuquerque. Somewhere on old Route 66, a vegan is crying. That’s how good these burgers are!