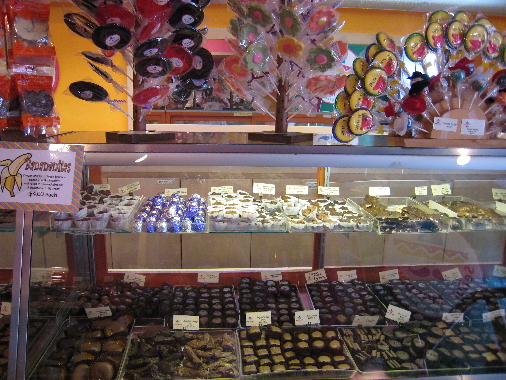 In the Land of Enchantment, piñon is as valuable as gold if not more, particularly in recent years when drought conditions have ravaged acres of piñon forests.  Piñon trees produce good harvests every seven years or so with the best bounties being found at elevations between six and eight thousand feet.  The roasted flavor of good piñon is intense–sweet with a subtle hint of pine that will transport your mind and taste buds to New Mexico’s pine forests.

While nature has increased the scarcity of these nuggets, fortunately they are still plentiful at Señor Murphy’s.  For more than 30 years Señor Murphy has been hand-making some of the most seductively sweet confections in the country and shipping them all over the world from its Santa Fe base of operations.

The sweet smell of success begins with quality New Mexico ingredients such as red and green chiles as well as piñon nuts and is punctuated by the creativity and devotion of true master candy makers.  One of the largest candy manufacturers in New Mexico, Señor Murphy produces more than 70 tons of unique gourmet candies in over 100 varieties each year.

Señor Murphy’s piñon rolls and piñon toffee are absolutely divine with taste contrasts that complement one another perfectly.  Caramales, one of the store’s most popular selling items feature vanilla fudge dipped in caramel and rolled in piñon nuts then wrapped in corn husks to resemble New Mexico tamales, are a Christmas gift favorite.

In 2004, Señor Murphy launched a store in Albuquerque’s Nob Hill district but moved to the Uptown area within a year.  Several of our visits have been to that destination although I will continue to update visits on this page rather than re-create an Albuquerque listing.