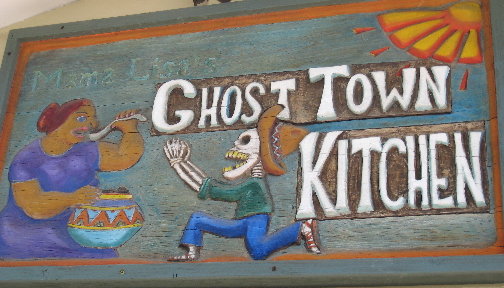 Steeped in rich history dating from the early 1800s, Madrid has been transformed from a hard- and soft-coal mining town with shafts as deep as 2500 feet down into a distinctive artist’s community. In the 1970s, artists and craftspeople converted old company stores and houses into shops, galleries and services. In doing so, they transformed what might otherwise have become yet another storied New Mexico ghost town into a popular tourist destination. Situated on the storied Turquoise Trail, Madrid is today a beautiful Bohemian escape city dwellers like me really enjoy.

Madrid’s unique charm and slow pace of life are infectious. It’s easy to imagine a carefree life away from the maddening crowds and hustle and bustle of modern metropolitan existence. The folly of modern existence is captured brilliantly in the wooden sign above the door to Mama Lisa’s Ghost Town Kitchen’s. The sign depicts a corpulent matron ladling soup into her mouth from an Indian pot while a sombrero and huarache wearing skeleton on bended knee begs for sustenance. It’s certainly Madrid’s citizens who represent the fatted woman while those of us envying that way of life are the skeletal beings.

Had the skeleton depicted on the sign been allowed to eat regularly at Mama Lisa’s kitchen, he, too, might have been endomorphic like much of American society. That’s because Mama Lisa’s serves hefty portions of delicious, maybe even extraordinary victuals…and yes, there is a Mama Lisa.  She’s a transplant from Chicago who’s been feeding visitors and locals in Madrid for more than two decades.  She and her tiny restaurant are very highly regarded by locals, but surprisingly unknown, despite the restaurant’s longevity, outside Madrid.

The signage might lead you to believe this is a restaurant with a multiple personality.  Most people know it as Mama Lisa’s, but its full name is Mama Lisa’s Ghost Town Kitchen, the “Ghost Town” portion an obvious reference to what Madrid almost became.  The “No Pity Cafe” subtitle came yeas later when the restaurant’s staff called a Santa Fe radio station on a frequent basis to request a song bemoaning “a town with no pity.”  Mama Lisa, a compassionate woman, has a heart of gold, giving a hand-up to many of the town’s poor residents who might not otherwise get much to eat.

As with many seasonal travel destinations, Madrid’s peak tourist season is in the warm summer months.  As such, it’s probably best to call ahead just to make sure the restaurant is open.  Save for in summer, hours are inconsistent and the restaurant is actually closed from January through March when the town reverts from a bustling hubbub of activity to a veritable ghost town.  When it is open, you’re in for a real treat.  Mama Lisa’s Ghost Town is a jewel, one of the two or three very best restaurants along the Turquoise Trail.

Mama Lisa’s menu is eclectic and everything is made from scratch. Organic ingredients are used to the greatest extent possible. The menu changes frequently and is posted on a slate board just inside the restaurant as well as on the front porch, weather permitting.  The restaurant is situated in the confines of a former two-story home located near the center of Madrid, just east of the fictional Maggie’s Cafe built for the Disney movie Wild Hogs.  Though the restaurant is as homey as possible, its restroom is a porta-potty behind the restaurant by a llama pen–all part of its charm.

Mama Lisa’s eclectic menu is a departure from the mundane. It’s a treat to read the slateboard and a challenge to pick what to order. Everything just sounds so good and you can always be assured of the highest quality of fresh, homemade food possible…just like a mama would make if she could cook nearly as well. As good a cook as my mom is, she never prepared curried acorn squash and orange soup for me, but Mama Lisa has. This is a fabulous, soul-warming soup. Beautiful to look at and absolutely delicious, it melds the surprising combination of acorn squash and orange into an elixir for whatever ails you.

If it’s on the menu, it would be hard to pass up the hummus pita with feta and harissa (a paste of chilies and garlic used to enhance food in North Africa). This Mediterranean inspired entree also includes a fresh assorted greens garden salad and cucumbers (use the harissa as a salad dressing). It’s entirely meatless and absolutely delicious.  While hummus has seemingly become a de rigueur offering at just about every restaurant, very infrequently does it make an impression on me.  Mama Lisa’s rendition does.  It is rich and garlicky, spiced just right.

During our inaugural visit, we lucked upon the “Schwarzneggar,” an aptly named Sunday special consisting of a three-quarter inch pork chop smothered with rich cream gravy and served with red cabbage imbued with caraway seeds and dried cranberries. Rarely have we had a better pork chop, especially in New Mexico.  An accompanying flax seed bread roll was out-of-the-oven warm and absolutely delicious. Mama Lisa (who rarely seems to venture out of the kitchen) bakes great bread when she finds the time.

Great bread, an airy and hearty housemade ciabatta bun, is the foundation of an excellent green chile cheeseburger.  Lightly toasted, the ciabatta provides a solid foundation to hold all the ingredients for the burger together.  A hand-formed all-beef patty extends beyond the bread on all sides.  It’s a thick beef patty topped with an excellent green chile blanketed by a molten white Cheddar.  The green chile barely registers on my piquancy scale, but rates highly on my roasted green chile flavor meter.  Toppings include julienne carrots, red onions, lettuce, pickles and squash.  The burger is accompanied by a warm potato salad.

The theme of “good food that’s good for you” applies seemingly to all sandwiches on the menu. Mama Lisa’s “Sloppy Jose,” for example, is made with organic ground beef and is served with dill pickles, a fresh tomato slice and mixed greens all on a ciabatta roll (a specialty of the house). The spicy ground beef practically oozes out of the buns as you squeeze them into your hands. Sandwich plates may include Kettle potato chips which are all natural, extra crispy and delicious–a perfect sandwich accompaniment

At most restaurants, especially in New Mexico, calling an entree “Enchilada Heaven” might be an audacious claim, but Mama Lisa’s interpretation of this quintessential New Mexican dish lives up to its name. The three ingredients which make this entree special are pork carnitas (adovada style and unbelievably tender), cremini (a small Portobello) mushrooms and a deeply rich red chile tinged with just a hint of cinnamon and a barely discernable bit of cumin. Perfectly prepared pinto beans and cheese add to the flavor parade.

The parade of surprises at Mama Lisa’s is endless.  You might believe you know what you’re in for if you see penne pasta with meatballs and sausage on the menu, but not so at the hands of a wonderfully inventive chef.  We discerned a real difference in the first taste of the sauce.  Sure the usual suspects–garlic, oregano, etc.–were obviously in the flavor profile, but there was also something deliciously different.  The sauce included a basil-enhanced pesto sauce that provided an enlivening zing that made me want a whole bowl of the sauce.

By the way, the rest of the penne pasta dish is perfectly executed, too.  The pasta is perfectly prepared, neither al dente nor overdone and mushy.  Dollops of melted mozzarella decorate the dish and provide a mellow cheese contrast.  The meatballs, near perfect orbs of seasoned ground beef, are plentiful and excellent.  The sausage, sliced diagonally and buried under the pasta, is fennel-kissed and delicious.  Mama Lisa’s prowess with Italian inspired dishes should be of no surprise considering her international repertoire.

Beverage selections may include a refreshing Tamarindo Refresco, loosely patterned after a Mexican agua fresca. If you’ve never had tamarind, you’re in for a treat. Tamarind is a fruity, sour, fleshy pulp which Mama Lisa squeezes into a lip puckering cup of deliciousness.  During another visit, the Mexican inspired libation was housemade limeade.  Not too tart, not to sweet, it proved a thirst-quenching beverage on a hot Madrid day.

Mama Lisa’s portions are waist expanding, but no matter how full you might be, you have to save room for dessert. Either that or shop for a couple of hours then come back just for dessert.

One of her specialties is a red chile chocolate cake. Velvety smooth and moist, it’s a delicious marriage of chocolate and chile. Montezuma and the Aztecs believed this combination possessed aphrodisiac qualities and it turns out, there is a physiological basis for this belief.  As all New Mexicans know, chile is considered an aphrodisiac because of its ability to heighten the pulse rate. Chocolate is imbued with phenyl-ethylamine, a substance that stimulates the same bodily reaction as falling in love.  The bitter-sweetness of chocolate and the smoky heat of the chile form an absolutely delicious combination! It’s made even better with Mama Lisa’s homemade ice cream.

One of the very best homemade ice cream treats we’ve ever experienced is Mama Lisa’s honey flavored ice cream, a dollop of which graced a fabulous “nectarine blue crisp” dessert served warm.  First, the nectarine blue crisp.  It’s a cobbler made with blueberries and nectarine (a fuzz-less relative of the peach) slices.  The blueberry and nectarine combination is a study in how well contrasting flavors can go together.  Now for the honey-vanilla ice cream.  Unlike so many housemade ice creams we’ve sampled, this one has a creamy, velvety texture, but it’s the prominent sweet honey flavor that’s the true foil which makes this dessert memorable.

Another outstanding dessert is Mama Lisa’s interpretation of the Mexican favorite tres leches cake. Taking just a bit of liberty, she tops the cake with caramel, homemade ice cream and adds strawberries to the cavalcade of flavors. It’s not quite spongy moist, but the press of each spoonful is made easy thanks to the sweet, delicious three milks combination.

The chocolate walnut strudel is light, flaky, moist and delicious. It is topped with a redolent bitter-sweet chocolate and imbued throughout with walnuts.  It’s one of the few things at Mama Lisa’s you can top.

This is an outstanding restaurant not on everybody’s radar!  If you want to impress friends and family, bring them to Mama Lisa’s and you’ll be hailed a pioneer, maybe a savant.  Please note that because of the frequency with which the menu changes, some (perhaps none) of the items described in this review might be available when you visit.  That would be fine, too, because no matter what’s on the menu is bound to be an adventure in deliciousness.