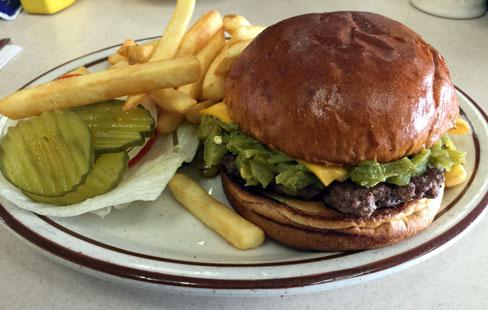 Addicts are all too familiar with the symptoms, especially the insatiable cravings that can only be quelled by a fix. There’s nothing like the high you get from the addictive mistress that is New Mexican chile. That’s why we willingly singe our tongues and scald our taste buds to get that fix. What gives chile its intense fire and creates the need for a fix is a chemical called capsaicin, a natural ingredient that stimulates the mouth’s nerve endings, causing a burning sensation. In response to this burning sensation, the brain releases endorphins, natural painkillers that may produce a temporary “high.” So, the more of a fiery chile you eat, the stronger the soothing effect. Even though chile isn’t medically addictive, some chile lovers may be hooked on the high they get…just ask anyone in New Mexico who loves the stuff.

Better still, ask a chile addict who no longer lives in New Mexico and can’t get the stuff everyday. The withdrawal is painful. In dreams they are plagued by the unrequited yearning which can be fulfilled only by a satisfying bowl of red or green. They wake to drool soaked and chewed up pillows. New Mexicans are fortunate indeed in that we can satisfy our lust for chile whenever we want–and we want it for breakfast, lunch, dinner and snacks in between. We want it in all foods sweet and savory. We want it at work and at play.

One of the very best new restaurants in Albuquerque in which to get that fix is the aptly named Mick’s Chile Fix. Mick’s isn’t situated in a bustling, well-trafficked, well eaten area, but in a humble brick stand-alone building in an industrial area off Candelaria. Open 7AM through 2PM from Monday through Saturday, it’s a locally owned and operated diner in which patrons willingly risk spilling some of the red stuff on their nattily whites or grungy blues. It’s a classic greasy spoon and in 2006, Mick’s earned a Greasy Spoon award from a local rock station.

The dining room is stark and functional. It’s not the type of diner in which comfy chairs invite lingering for post-meal conversations. Come to think of it, the only conversations I recall during our inaugural visit were in between utterances of umm and yum. Conversations that did take place centered around how good the food is. A persistent, droning hum from the ice maker could be another reason conversation seemed so sparse. The menu, on which the letter “i” in chile is painted like a red chile and the “i” in Fix is painted like a green chile features all the New Mexican standards. Breakfast is served all day long.

Salsa isn’t complementary at Mick’s, a trend that seems to be increasing among Duke City restaurants. It’s a nice salsa, pureed but not to the point of being liquefied. It’s got a piquant bite that goes oh so well with the plateful of crisp, low-salt and heated chips. If, like me, you like heat with heat, enjoy a cup of coffee (or six) with the salsa. Hot coffee has the unique ability to enhance the piquancy of chile.

30 October 2007: Two of the more popular entrees at Mick’s are generously endowed combination platters fittingly called the “Hungry Man’s Lunch” and the “Hungry Man’s Breakfast.” What makes their popularity so surprising is that many of the partakers have to go back to work on what will invariably be an overfull belly. The Hungry Man’s Lunch is bountiful: two beef tacos, one meat and one cheese enchilada, a tamale and two paper-thin tortillas along with the de rigueur beans and rice. Everything is smothered in your choice of chile (red, green or Christmas style) and a blanket of Cheddar.

30 October 2007: If you’ve ever had a combination plate in which you can’t discern much difference between the enchiladas and the tamale, you’ll appreciate Mick’s version of both. The tamale has the perfect amount of masa with a nice texture. It provides a complementary contrast between the pronounced corn flavored outer “shell” and the chile blessed, shredded meat inside. The enchiladas are substantial with fried, soft corn shells enveloping generous portions of meat and cheese (this is a very cheesy enchilada). Rarely do you find a cheese enchilada as flavorful as Mick’s rendition. The tacos aren’t your garden-variety tacos busting at the seams with lettuce and tomato. Once you get past the greenery (and reddery?) there’s plenty of well seasoned and flavorful beef.

The chile isn’t quite piquant enough for a fire-eater like me (coffee helps), but it’s quite flavorful. Both the red and green chile are thickened almost to the consistency of cream. The green chile is almost luminescent and packs a fruity flavor. The red is a bit more mild than the green. Still, both will assuage your fix. There are plenty of options on the menu for folks who don’t necessarily need a fix (tourists mostly).

30 October 2007: For them, there’s the Hungry Man’s Breakfast which is missing only one thing–an angioplasty. That’s what you might need after three eggs, hash browns, two strips of bacon, two sausage links, a pancake and toast or tortilla. This is the type of breakfast that will fill you up for an entire weekend. The pancake itself is roughly the size of the unidentified conveyance seen flying over Roswell some sixty years ago. It’s also an excellent pancake, the only room for improvement being warm syrup instead of syrup from a squeeze bottle.

4 May 2015: Joey Chestnut, winner of five straight Nathan’s Famous Hot Dog Eating Championships (and counting) may just meet his match should he ever try Mick’s “Shocker,” a behemoth burrito that covers an entire plate and gives the servers a workout just by ferrying it over to your table. The aptly named Shocker is roughly the size of a piece of firewood. It’s engorged with eggs, hash browns, beans, sausage, bacon and ham smothered with your choice of red or (and) green chile. The three meats are full-sized, not tiny bits and pieces. That means, entire slices of bacon, sausage links and thick chunks of ham–and there’s plenty of them all. The eggs, hash browns and beans are all nicely seasoned, worthy complements to the meats. There’s also plenty of chile for each spoonful and enough shredded cheese to stuff a grilled cheese sandwich.

6 May 2015: One advantage to dining alone is sitting at “two top” tables in close proximity to other diners eating alone. Not only can you ask your neighbors for recommendations, you have a vantage point that allows you to see what is delivered to their tables. During consecutive visits in May, 2015, the dish most often delivered was a green chile cheeseburger about which my neighbors were very effusive. Citing the “just-up-the-street” proximity to LotaBurger, one neighbor touted Mick’s green chile cheeseburger as far superior to LotaBurger’s increasingly shrinking version.

If sheer size was the only criteria for judging the quality of a green chile cheeseburger, Mick’s green chile cheeseburger would be at or near the very top. It’s a behemoth burger served “competition style” as my friend Larry McGoldrick likes them. That means buns, beef, green chile and cheese. Lettuce, onion and tomato are served on the side as well as mustard, ketchup and even mayo. You can dress your burger yourself the way you want it. The beef patty is hand-formed and made from fresh beef prepared to about medium-well. It’s moist and flavorful. The green chile has a discernible piquancy, a rarity even in New Mexico where the green chile on far too many burgers is about as incendiary as lettuce. This is a green chile cheeseburger not afraid to emphasize the “chile” part of the name. It’s a very good one!

Chile addicts like me will readily admit to recidivism, relapsing willingly to the allure of our green and red mistress. Mick’s is a great place to get our fix near Route 66.