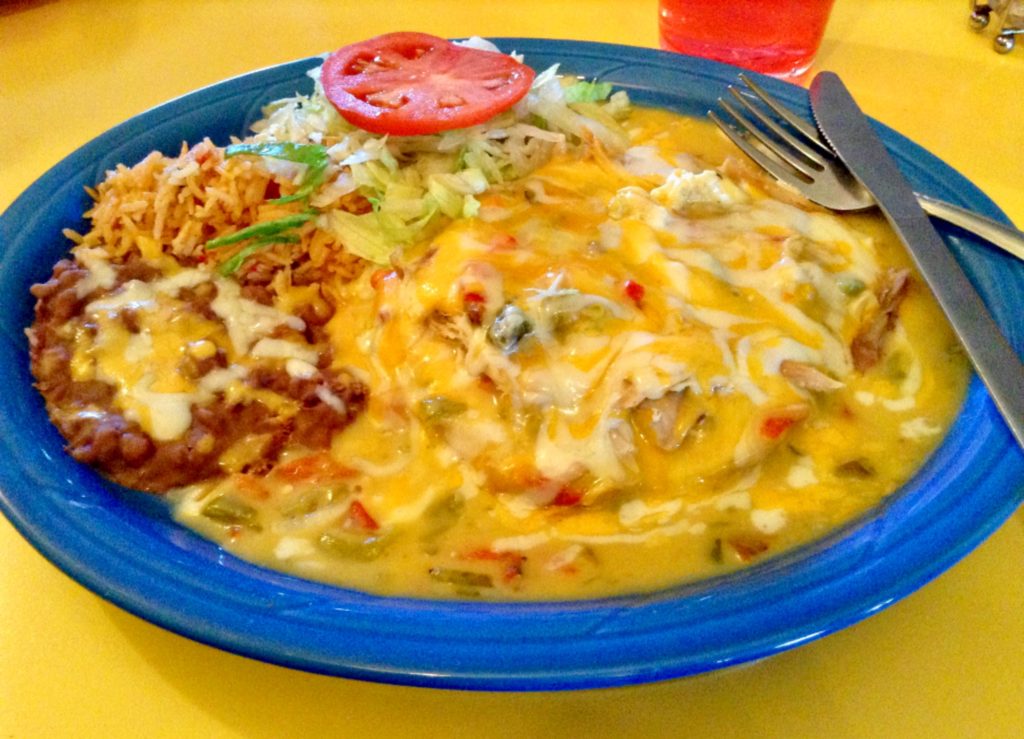 You might expect that a village renowned as the “chile capital of the world” could also boast of restaurants which showcase chile of such high quality that they would be veritable Meccas to which diners from throughout the state would pilgrimage.  With a population of 1,648 (as of the 2010 census), Hatch has fewer than ten restaurants, many of which do indeed seem to draw nearly as many visitors from outside of Hatch as they do local residents and most of which do indeed showcase red and green chile.  For New Mexican food, the one restaurant which most locals name as their very favorite is the Pepper Pot.

Located in a converted residence, the Pepper Pot still resembles a family home, the give-away that it’s a business being prominent signage on a concrete plant stand.  Homey exterior implements such as an old-fashioned push mower and a miniature John Deere tractor adorn the lawn.  When you step into the restaurant and seat yourself in one of the dining room’s sixteen tables, you might notice that the ambiance is laden with Catholic symbols.  Even the flowers painted above the arched doorways resemble the roses on Juan Diego’s tilma.  A bulletin board recounts the great Hatch flood of 2006.

What is conspicuously absent is any mention or memorabilia of arguably the restaurant’s most famous visitor.  In August, 2008, the Travel Channel’s indefatigable host Anthony Bourdain dined at the Pepper Pot during a filming of his No Reservations show.  His dining companions were Judd Nordyke (mayor of Hatch) and his lovely better half Marcia (coordinator of the Hatch Chile Festival) who schooled Bourdain on the fine points of red and green chile.  Bourdain declared Pepper Pot’s enchiladas “the best red enchiladas of his life.”

My friend and fellow gastronome Ruben Hendrickson was even more effusive about the red chile at the Pepper Pot, a chile he compared favorably to the sublime red chile at Mary & Tito’s in Albuquerque (a chile sourced from the Delgado Farms in Hatch).  He praised its lack of residual bitterness so prevalent in many red chiles and boasted of its smooth, earthy flavor.  Ruben is a realist, however, and is quite familiar with Murphy’s Law which posits that the more you brag about a restaurant, the more it will disappoint when you take guests with you.  Ruben and I visited on September 11, 2012, scant days after the Hatch Chile Festival.

As we perused the menu, we were surprised at how quiet the restaurant was. Conversations were in low, hushed tones.  Churches are more boisterous.  We theorized that the food is so good, it deserves the diners’ rapt attention.  The dining room was more than half full with a mix of locals and wide-eyed visitors.  The telltale sign that local farmers were also dining at the Pepper Pot was the long-sleeved (on an 85-degree day) shirts and hats they wore.  We surmised there were at least a few chile-heads in the premises, too.

The Pepper Pot is owned and operated by sisters Melva Aguirre and Rosaria Varela who prepare all dishes from scratch.  Their restaurant is open only for breakfast and lunch.  Their chile is obtained locally from the Lytle family, generations of which have farmed in the Hatch Valley since the late 1800s.  Jim Lytle, the patriarch of the family, developed the fabled Big Jim chile pepper which is featured prominently on Pepper Pot’s cuisine.

As you peruse the menu–a two-page compendium of New Mexican food with some American favorites (mostly burgers, salads and sandwiches) interspersed–a basket of chips and bowl of salsa will be delivered gratis.  The salsa is chunky and fresh, a mix of tomatoes, onions and jalapeños with a hint of cilantro.  It’s not an especially piquant salsa, but has a very nice flavor.  The chips, definitely not uniform in size, appear to be housemade from corn tortilla shells.

Enchiladas are available with your choice of  cheese or ground beef.  The cheese enchiladas are engorged with two cheeses and topped with even more cheese, resulting in a melting, molten mess of yellow and white deliciousness.  Add an fried egg over easy and you’ll have an even more beauteous runny mess.  Then there’s the red and green chile (you should try both).  The green chile is superb!  It’s the type of chile the Hatch Chamber of Commerce might select as an exemplar of what green chile should taste like.  It has a discernible fruitiness and a nice roasted flavor with a piquancy level of about medium.  Most plates are served with rice and beans, both of which are quite good.  The rice separates easily and isn’t clumpy as bad rice tends to be.  The beans are blanketed with a smattering of shredded cheese.

Also quite good is a chile relleno.  It would have been outstanding had just a bit more attention to detail been paid in its preparation.  For example, the skin wasn’t completely peeled, resulting in the annoying texture of chile skin in your mouth.  The rellenos are moderately battered and are easy to cut into with a fork, a sign they’re well-made.  The chile envelope isn’t especially piquant, but the cheesy interior is bubbling hot and thoroughly delicious.

Eager to relive red chile memories of a past meal at the Pepper Pot, my friend Ruben ordered a plate of red chile with pork which also came with rice, beans and a flour tortilla.  One bite was all it took for him to discern this was not the same chile of his dreams.  It wasn’t the dreaded demon spice cumin which befouled its purity.  Instead, a surfeit of Mexican oregano was used which rendered astringent what was probably an outstanding chile.  The pork was cut into small pieces and might have been even better without chile (that chile, anyway).  My experiences with the red chile on my enchilada plate were similar to Ruben’s.  Thankfully I had green chile to fall back on.

On the strength of its green chile alone, the Pepper Pot Restaurant should be considered one of Southern New Mexico’s very best dining options.  It’s a restaurant worthy of being the local’s favorite for New Mexican food in the world’s chile capital.