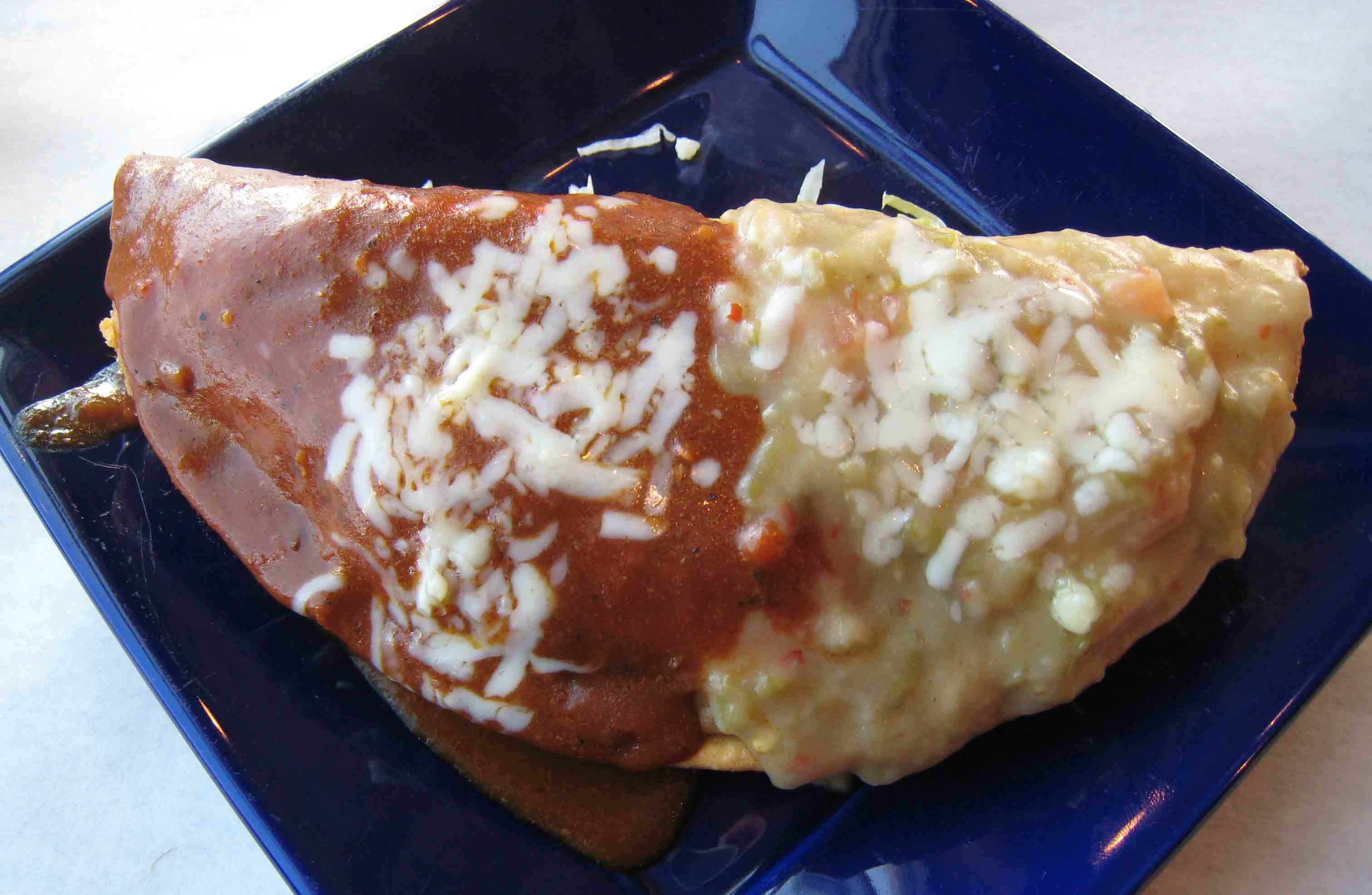 In the early 80s I tried to impress my very traditional grandmother by taking her to a recently opened restaurant on Academy Boulevard.  What was not to like?  The restaurant shared the mellifluous name she had proudly worn for over fifty years.  It was a locally owned and operated and had earned several awards.  It boasted a multi-page menu.  Surely Garduno’s of Mexico offered something she would like.

It turns out the restaurant’s name was the only thing she liked.  One nod of disapproval after the other ensued as she meticulously perused the menu, a compendium of Mexican and New Mexican appetizers, entrees and desserts.  Scanning the descriptions carefully, she dismissed the contemporary interpretations of the foods on which she was raised and had prepared for more than eight decades.

My mind floods with sweet memories of my cherished Grandma Piedad every time I visit a restaurant offering contemporary twists on traditional New Mexican food.  Such was the case when my friend Bill Resnik and I first visited the Blue Cactus Grill, a modern and attractive new restaurant on Albuquerque’s West side, just north of Paseo del Norte on Coors Boulevard.

Bill reminded me that the Blue Cactus Grill is situated at the former site of  La Salita which lasted less than two years at the location.  Even though we hadn’t enjoyed our sole visit to the west side rendition of La Salita, Bill considers it a community service to accompany me on visits to new restaurants (especially when I’m buying) so he was game to try something new.

The Blue Cactus Grill was launched by Mark Corsonatti and his fiance Jamie, both of whom endeared themselves to guests by their peripatetic presence.  Like all true ambassadors for their businesses ,they treated their guests like family and became as beloved as their restaurant’s food.  In February, 2010, Mark and Jamie sold the restaurant to Janis and Eddie Crispin, native New Mexicans. who have kept everything on the menu save for revamping the red and green chile and adding “& Bakery” to the restaurant’s appellation.  Bakery treats under glass are one of the first things you see when you step into the east-facing restaurant.

In terms of ambience, the decor at the Blue Cactus has a New Mexico traditional meets new west contemporary feel to it.  Faux adobe half-walls, stripped pine latilla poles and braided chile ristras seem at home among the exposed ceiling ductwork and painted concrete.  Metal sculptures of several types of tall cactus hang on adobe colored walls.  There is relatively little color in the restaurant…until you get to the menu where there’s plenty of red and green.

The menu is replete with traditional New Mexican offerings interspersed with the contemporary interpretations my grandmother would have frowned upon.  Hand-cut angus beef steaks, green chile spare ribs, tequila-lime chicken, empanada burgers and more surprises make it an interesting and exciting menu.

The complementary salsa with yellow and blue corn tortilla chips is an early indicator that perhaps the promise of exciting food will be delivered upon. The chips are crisp and thick enough to dredge up the large amounts of salsa I like on my chips.  The salsa is good, make that very good, as in good enough to be bottled and sold good.  It’s of medium thickness so it doesn’t run off your chips onto your hands.  It’s also of medium piquancy with a jalapeno based bite.  It’s the type of salsa you might have two bowlfuls of before your entrees arrive.

Counting calories is an exercise in large numbers if you have some of the appetizers.  The Sandia Dip appetizer, for example, is crafted from the restaurant’s signature green chile white cheese sauce and refried beans topped with sour cream and served with warm fried tortillas cut into chip-like triangles.  That green chile white cheese sauce is one of those contemporary twists even traditionalists will have a hard time disliking.

Traditional entrees include chile rellenos, tamales, enchilada plates, stuffed sopaipillas and tacos, all of which are served with beans, rice and sopaipillas and by request, a side of sour cream.  Your best bet is the Cactus Combo plate with either two or three selections.  With combo plates you also get a soft or hard taco.

The combo plate pictured above includes a stuffed sopaipilla, chile relleno and tamale.  Conspicuous by their absence are red and/or green chile.  That’s because I ordered both.  They were delivered in crispy tortilla shells, the type of which are sometimes used for taco salads.  The refried beans are very good with shredded white cheese melted on top.

As for the chile, both red and green are quite good.   Neither are especially piquant, but  the green, in particular, possesses qualities that remind you with every bite that chile is a fruit (never mind that it is New Mexico’s official state vegetable, along with the pinto bean).  The green chile has a hint of smokiness from the roasting process.  The red chile is light in texture and rich in flavor, seasoned very well.

From among this combo, the stand-out is the chile relleno which is among the best in the city.  Two things make it a stand-out.  First, instead of stuffing an anemic chile with no bite (Poblano or Anaheim come to mind) with Cheddar of mild sharpness, the Blue Cactus Grill stuffs a real New Mexico chile with a flavorful white cheese then tops the relleno with a green chile white cheese sauce that’s positively addictive.  Secondly, while the batter may not be tempura thin, it’s thin, crispy and sheathes the chile in flavor.  It doesn’t crumble off when you cut into the relleno.

Although green chile cheeseburgers are practically a religion in New Mexico, it might be possible to tire of them (not that I’ll ever reach that level).  If so, the Blue Cactus Grill offers two alternatives.  One is the Empanada Burger, a half-pound Angus beef hamburger wrapped in a flour tortilla, stuffed with Monterrey Jack cheese and green chile then deep-fried to a golden brown hue.  According to the wait staff, this burger already has a legion of fans.

Another alternative is the Guacamole Burger (pictured above), an eight-ounce Angus beef hamburger wrapped in a soft tortilla filled with green chile white cheese sauce and guacamole.  This is an ultra-rich burger bursting at its seams with flavor.  You won’t miss mustard and ketchup with this one.  It’s served with homemade papas, a mix of sweet and white potato fries cut thick.  I may have a new favorite papa in town and it’s these sweet potato papas, plus-sized circular-cut potatoes which are crispy on the outside and tender inside.

The grill section of the menu includes two steaks that won’t be outdone by any steak on Albuquerque’s west side, especially the one served at that pseudo Australian steakhouse just up the street.  These steaks are hand-cut upon order and are absolutely fantastic.  Your two options are a seared and seasoned eight-ounce (larger cuts available) Angus filet or a 14-ounce seared or blackened Angus ribeye, both priced well under $20.

Not only are these beauties prepared to your exacting specifications (order them “medium” and you get a hint of pink with plenty of juiciness), they’re seasoned to perfection with a seasoning mix that includes salt, pepper, garlic and a menagerie of other ingredients ownership won’t divulge.  If taste bud clues are on target, the seasonings hint at piquancy, citrusy and maybe even smokiness.  Only the now defunct Great American Steakhouse seasoned their steaks this well.

The Angus cut of beef has an optimum level of marbling for a high degree of flavor and tenderness.  The Blue Cactus Grill’s ribeye is as tender and delicious as any steak in town as is the Angus Filet.  I’ll stake my reputation on this steak!  For the best of two worlds–steak and New Mexican food–try the Angus Filet Burrito, a thick flour tortilla engorged with bite-sized chunks of tender filet, potatoes and beans slathered with your choice of chile.

The dawn of 2009 as with the promise of any new year was exiting for many reasons, not the least of which was the inauguration of breakfast and Sunday brunch at the Blue Cactus Grill.   The breakfast menu makes up for its brevity with  the high quality for which the restaurant is earning a reputation.  Standards such as the ubiquitous New Mexican breakfast burrito are available, but for a special and unique treat, ask for the breakfast empanada with red and green chile (Christmas style).

The breakfast empanada is a deep-fried tortilla encasing eggs, potatoes and your choice of bacon, sausage or chorizo.  Despite being fried, this is not a greasy or heavy breakfast entree.  In fact, it’s surprisingly light and absolutely delicious.  Every ingredient is prepared to perfection, a hallmark of this restaurant.  In its May, 2010 issue Albuquerque The Magazine awarded the breakfast empanada a Hot Plate award, a select honor accorded to the Duke City’s most intriguing foods, wines, events and people.

The menu was once limited to two desserts–an apple empanada akin to apple pie a la mode or a Snickers empanada, the Blue Cactus Grill’s twist on an old favorite–until Janis Crispin added her baked treats to the menu. I’ve had and have loved deep-fried Snickers, but this dessert takes Snickers to a new level.  A Snickers bar is actually wrapped in an egg-washed flour tortilla then deep fried and drizzled with chocolate and powdered sugar.  As if that’s not rich enough, it’s served with two scoops of ice cream.  This is the definition of decadence.

The new dessert additions to the formidable Blue Cactus Grill menu are baked goods, including more than 30 different cupcake flavors.  Light, moist and frosted with  ethereally rich butter cream frosting applied generously, the cupcakes come in such creative and delicious flavors as bubble gum, cotton candy, pineapple, chocolate turtle and cheesecake.  The pineapple cupcake is akin to a pineapple upside down cake in miniature topped with a dollop of heavenly pineapple flavored frosting.  Other baked good offerings include cakes, cookies, muffins, pastries and more.

If you’re headed to the Coors Bypass restaurant row for a predictably boring meal at one of the chains, take a slight detour and visit the Blue Cactus Grill.  My grandmother might not have approved of the restaurant’s approach to all the menu entrees, but I’ve been won over by some of those contemporary twists this terrific restaurant offers.  This is a fun restaurant with personality, warmth and great food.