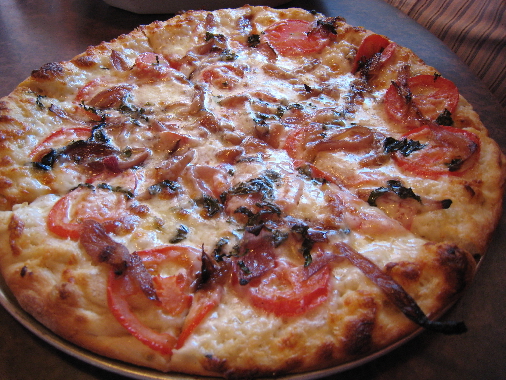 Deadheads and pizza have been inextricably tied since 1993 when (legend has it) an audacious pizza delivery boy absconded with several cassette tapes from Jerry Garcia’s kitchen counter.  It didn’t take long before late-night Grateful Dead radio programs around the country were playing second- and third-generation “dubs” of the rough mixes that have come to be known as “The Pizza Tapes.”

The Pizza tapes featured the collaboration of Grateful Dead guitarist Jerry Garcia, mandolinist David Grisman and guitarist Tony Rice, all legendary figures in the music world.  The 12-song improvisation gives every indication that the session was warm, intimate and replete with the joyful spontaneity and rapport of friends not used to playing together but having a genuinely good time nonetheless.

In 2000 the Pizza Tapes were released as an album with all its warts and blemishes (talking between musicians, false starts and mistakes).  Alisa Young, who hardly looks old enough to have been born in the 70s (much less the 60s), saw her first Grateful Dead concert in 1978.  Today Sandia Crust, the restaurant she and her husband Jamie, launched in December, 2005 celebrates the Grateful Dead and both the unique music and culture (or counterculture depending on your perspective) of San Francisco during the generation of love that was the 60s.

The restaurant’s pumpkin and paprika walls are festooned with several lithographs of Jerry Garcia (1942-1995) along with autographed photos of other Grateful Dead members. Also immortalized are Janice Joplin (1943- 1970) and Jimi Hendrix (1942-1970).  Jefferson Airplane aficionados will appreciate the poster announcing a concert at San Francisco’s Avalon Ballroom featuring Jefferson Airplane and a local folk-rock group called the Great Society.  The Airplane is considered the flagship act for the burgeoning psychedelic music scene developed in San Francisco during the mid 1960s.  The lead singer for Great Society was Grace Slick who would later become a member of the Airplane.

A psychedelic theme continues with a framed limited edition (278 of 420) two-paneled print depicting 1960s counterculture icon Timothy Leary.  An advocate of psychedelic drug research and use, Leary coined and popularized the catch phrase “Turn on, tune in, drop out.”  A sign over the front door expresses some of the “establishment’s” sentiment of the era: “Hippies use the side door.”  If you look closely, you’ll also see a Haight-Ashbury label on the back side of the restaurant’s open/closed signage.  The 60s American counterculture era is synonymous with the intersection of Haight and Ashbury Streets in San Francisco, a district that served as the center of the 1960s hippie movement.

It is definitely the Young’s intent to inspire nostalgia among their patrons though I suspect that many of them have only read or seen documentaries about the 60s and didn’t live it the way some of us geriatrically advanced fogeys did.  Having lived within easy walking distance of New Mexico’s branch of the Hog Farm Collective (in the 60s, Hog Farm members were a mixture of hippies, political activists and mainstream society drop-outs), the art and ambience at Sandia Crust resonated greatly with me.

Also resonating strongly is the menu at the diminutive pizzeria.  At first glance there’s not much to distinguish it from any menu at any shopping center pizza parlor: pizza, calzones, Ciabatta sandwiches, pasta, soups, salads and desserts.  Study it a bit further and you might just surmise that the unique pizza combinations were inspired by the tie-dyed tee-shirts popular in the 60s.  These are not your mama’s pizzas.  Sure some of the standards are there, but you can have a Margherita anywhere (albeit probably not as good as at Sandia Crust).

Try instead the Black n Blue, a pie topped with blackened steak, gorgonzola, shallots, sun-dried tomato pesto and mozzarella.  This gourmet pizza is terrific!  The gorgonzola is of medium sharpness and gives the pie a wonderfully pungent aroma.  The blackened steak is cut into small bite-sized pieces and while you might be tempted to pluck off and eat each piece separately, don’t dare desecrate the harmonious marriage of flavors on this inspired pizza.

The traditional pizza bianca or white pizza generally has no sauce, just a covering of mozzarella cheese atop of garlic, olive oil and herbs.  At Sandia Crust, some artistic liberties are taken with the White Pizza offering.  Alisa, a creative pizzaioli artisan if there ever was one, tops this pizza with Mascarpone cheese, olive oil, Roma tomatoes, roasted garlic, caramelized onions and mozzarella cheese.  It’s a marvelous melding of ingredients on an artistic canvas of perfectly charred dough.

All pizzas are 12-inches though a 16-inch option is also available.  With a day’s advance notice Sandia Crust will also prepare a gluten-free pie for you.

The Sandia Crust Pizza Company was initially ensconced in a strip mall on the west side of the Turquoise Highway, then  moved to the former site of Nouveau Noodles, a stand-alone facility before settling on a site just south of the Sandia Park entrance to the Sandia Mountains.  It’s a heavily trafficked restaurant, much of its business being a robust take-out operation. Eating in is also an option and a great way to imbibe San Francisco culture on the East Mountains.

The restaurant’s salad repertoire is as intriguing as the pizza menu.  The spinach salad is composed artistically of fresh baby spinach, smoked bacon, caramelized onions, walnuts, goat cheese and embellished with a gorgonzola vinaigrette dressing.  The dressing may sound like a joining of unlikely ingredients, but in the hands of the Youngs, it’s likely good enough to convert the most staunch of carnivores.

In its annual Food & Wine issue for 2012, Albuquerque The Magazine awarded the Sandia Crust Pizza Company a Hot Plate Award signifying the selection of its grilled vegetarian lasagna as one of the “most interesting, special and tasty dishes around.”  Considering the thousands of potential selections, to be singled out is quite an honor.

Whether you’re into 60s era nostalgia or just want terrific pizza, the Sandia Crust Pizza Company is more than a worthwhile drive on one of America’s most scenic highways.  It’s a destination restaurant that will make you wish it was closer to home (or more likely that you had the good fortune to live on the back side of the Sandias.)