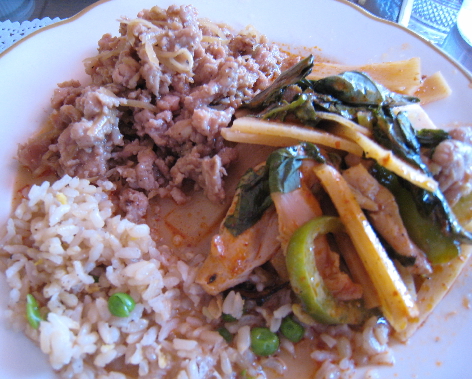 Note: This review was written about a Tawan Thai Cuisine location in Rio Rancho that no longer exists. The original Tawan Thai at 200 Wyoming Blvd, S.E., also closed in late 2008.

For Rio Rancho’s Thai cuisine aficionados the sky was bleak only briefly. The despair they felt after the closure of Hong Thai was replaced scant weeks later by elation at the August, 2007 launch of Tawan Thai Cuisine. With that launch, the sun began shining brightly as City of Vision residents could once again Thai one on.

Tawan, the Thai word for sun, is quickly becoming a shining star (a sun) in the City of Vision’s restaurant scene. Ensconced in the nondescript Lujan Plaza, it is, for many reasons, appropriately named for the sun.

One of those reasons is that the sun might be high in the sky when you get there and behind the horizon when you leave, a testament to service as slow as an Alaskan sunset in June…but I digress.

Rio Rancho’s Tawan Thai Cuisine restaurant is the second restaurant by that name in the Albuquerque metropolitan area. The first is on Wyoming Boulevard about a mile north of the Kirtland Air Force Base entrance. Both are owned by Monica and Harris Nonnapha.

Rio Rancho’s Tawan occupies the space once held by the aforementioned Hong Thai which succeeded China Luck in a corner suite which has seen many tenants in its day. One commonality among the last three occupants is a lunch buffet.

A lunch buffet isn’t necessarily an accurate barometer of a restaurant’s quality, but it does give you an opportunity to sample several different items. If you’re lucky you’ll find one or two intriguing items which might prompt a dinner visit sometime in the future. For me, the future was all of six hours away. That’s how much promise several buffet items showed. The most promising were pot stickers with an aftertaste of delicious grilled char. Interestingly, those pot stickers aren’t on the regular menu, but they should be.

The rotating buffet menu also included minced chicken larb, a Thai meat salad flavored with chili, mint leaves, lime juice and assorted herbs and spices. Tawan’s larb has the consistency of sausage out of the casing and in fact, tastes like a very good sausage.

The ubiquitous egg roll also made an appearance on the lunch buffet. It’s a vegetarian egg roll, the primary vegetable ingredient being cabbage. These egg rolls also have the delicious grilled char smokiness of the pot stickers without any hint of being burnt.

Tawan’s sweet and sour sauce is somewhat clear and watery with the consistency of Vietnamese fish sauce. It’s also more sour than it is sweet, courtesy of generous amounts of vinegar, and not at all lacquer-like in appearance and candied in taste like so many egg roll sauces.

From among the buffet items, the only item which truly disappointed was the fried rice which wasn’t quite done. If there’s such a term as al dente for rice, this rice would fit that definition. It wasn’t quite crunchy, but like al dente pasta had just enough resistance to be felt “by the tooth.”

Tawan’s lunch buffet was a bargain at $6.95 per person. It was served from 11AM through 3PM Monday through Friday but was discontinued within months after the restaurant’s launch.

One other thing nine-to-fivers will appreciate about Tawan’s buffet is the “get in and get out quickly” factor. If you’re in a hurry, however, you might not notice just how lovely (in a typically subdued manner) the restaurant is.

As in just about every Thai restaurant, de rigueur photographs of the reigning king and queen of Thailand are prominently displayed. I’ve often wondered what the general public’s reaction would be to framed photographs of Dubya in every barbecue restaurant in America.

The main dining room’s walls are painted a bright lemon yellow and are trimmed in rust. Maroon sheers festoon every window. Over the buffet station are figurines of a troupe of Thai musicians, each member carrying or playing an instrument of some sorts: woodwinds, string and percussion.

Interestingly, instead of the heterophonic (one melody but multiple voices, each playing the melody differently or in a different tempo or rhythm) music, the dulcet tones of woodwinds and strings seem to be Tawan’s music of choice. Frankly, it makes for a more enjoyable dinner ambiance than the nasaly vocals of the heterophonic style.

What really sets the mood is a large hand fan on the dining room’s west wall. The fan is the orange shade of a New Mexico sunset. Appropriately, the fan is hand-painted with a scene depicting a Thai fishing village at dusk. A watery lagoon reflects the sinking sun and illuminates grassy huts on the shore and fishing boats coming in after a day’s catch. It is quite striking.

Also striking is an appetizer selection called golden bags (six per order). Crispy wontons are stuffed with cream cheese mixed with cilantro and crab meat. Whether you call them golden bags or crag Rangoon, they are absolutely delicious. The buttery smooth cream cheese and refreshing cilantro is what you’ll taste most prominently with but a vague hint of crab.

From among the combination plate, the stand-out are the golden bags and the egg rolls. The satay was somewhat desiccated though an excellent peanut sauce invigorated it.

The Massamun Curry, a dish from the southern part of Thailand, is a spectacular entree containing coconut milk, potatoes, onions, roasted peanuts and pineapple along with your choice of meat. The coconut milk and the curry are complementary with neither dominating, instead both playing concordant tunes on your taste buds.

Massamun curry can be made piquant to your exacting specifications. New Mexico fire eaters should easily be able to handle level five or six.

The second factor and one I’m still debating is whether any curry, outstanding though it may be, is worth waiting more than an hour for.

The Alibi’s lovely and talented restaurant critic, Jennifer Wohletz reported in her review of Tawan that service got progressively slower as the meal went on. That was our experience as well, hence my earlier comment about the sun being high in the sky when you arrive and beyond the horizon when you leave.

During our third visit, our appetizer (golden bags again) arrived in 25 minutes and our entree 20 minutes later. This was a market improvement from our inaugural dinner visit but still somewhat slow.

The slowness is mitigated somewhat by the wonderful food served at Tawan. An order of drunken noodles with pork was perhaps the best we’ve had in the metropolitan area. The pork had a pronounced grilled taste while the flat noodles were perfectly cooked. Unlike other drunken noodles we’ve had, there was little bite to these. Instead the prevalent taste was of sweetness–almost pad Thai sweet but more closely resembled an anise blessed Vietnamese dish. It was delicious.

The Tom Kha Gai is served in a unique clay vessel unlike the aluminum tureens used at most Thai restaurants. Instead of the usual Sterno, a flammable jellied alcohol was used and it upped the heat intensity considerably. In fact, at one point we feared the soup would boil over.

Regardless of temperature, this is some of the best Tom Kha Gai in the Albuquerque area–a perfect melding of ingredients that allowed each to shine in a harmony of deliciousness.

Lest it escapes me, you can wash down your meal at Tawan with bubble juice with tapioca or what is called boba juice at other restaurants in the Duke City. Tawan’s version is even more creamy than we’ve had in New Mexico with a texture like ice milk.

The bubble juice is also naturally sweetened, not at all cloying like some boba juice tends to be. You can see and taste pulpy bits of mango and honeydew (the two available flavors).

Don’t let too many suns set before you visit Tawan.