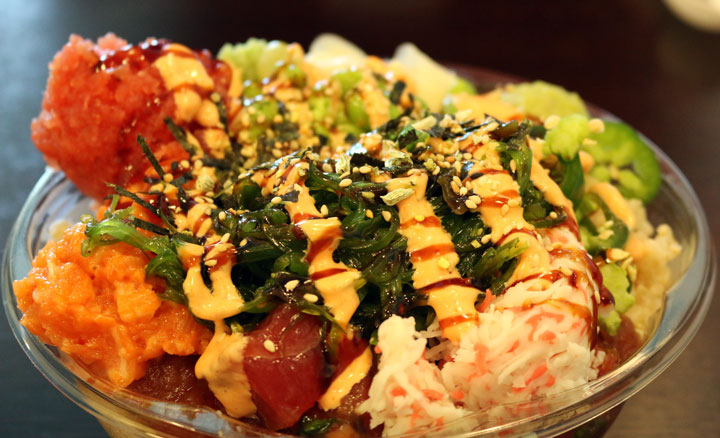 Ask most professional restaurant critics where to find the highest rated or best restaurant across the fruited plain (or even in their locality) and they’ll likely steer you in the direction of some highfalutin restaurant serving haute cuisine prepared by (or at least named for) a celebrated chef. With an exclusive wine cellar showcasing fine aged vintage, these white tableclothed pantheons of gastronomy are altars of excess. Obtaining a table could mean several months on a waiting list and a meal could set you back the equivalent of two months in groceries. For most of us dining at such establishments is a rare event reserved for special occasions.

The difference between professional restaurant critics and the general dining population is that the latter isn’t necessary impressed by ambiance, cost and exclusivity. To the “average” Joe and Jane, it’s all about enjoyment and experience. The venue in which much of the general dining population expresses its likes and dislikes isn’t a newspaper or blog, but a crowd-sourced online presence named Yelp. In 2014, Yelp’s highest rated restaurant in these United States was a hole-in-the wall takeout eatery with the pedestrian name Da Poké Shack. Reflective of the “every man and woman” nature of many Yelp posters, the Land of Enchantment’s “best restaurant‘ for 2016 was deemed to be Albuquerque’s Asian Pear.

The year it was named the country’s highest-rated restaurant, Da Poke Shack’s average Yelp rating was five stars (on a scale of one to five) on roughly 600 customer reviews. That’s a flawless Bo Derek rating with nary a disparaging word uttered. Sure poke is one of the most popular foods in Hawaii, but Yelp analysis actually determined most reviews were posted by tourists–ostensibly some of them from mainland locales in which poké is not to be found. Fortunately, Albuquerque is not such a place. In Poki Poki Cevicheria, the Duke City has had a poke restaurant since May, 2016 and it’s one of Yelp’s highest rated Albuquerque restaurants with an average rating of 4.5 on 95 reviews as of this writing.

If you haven’t had poké (always pronounced po-kay), you’re in for a treat. Poké refers to a “chunked” marinated or seasoned raw fish dish that’s been served primarily as an appetizer in Hawaii for centuries. In fact, the Hawaiian term “poké” simply means to “chunk” or to “cut crosswise into pieces,” both aptly descriptive terms for the salad-like preparation of seafood that has been cut into small chunks and marinated. Largely influenced by Asian flavors and ingredients, poké can be–and is–made with almost any type of seafood and topped with a vast array of garnishes and sauces. As with sushi, the chef’s imagination often determines the composition and diversity of poke.

Although it may seem the Duke City is slow to embrace culinary trends that have captured seemingly every other major metropolitan market, once we catch onto something, we embrace it enthusiastically. February, 2017 saw the launch of Albuquerque’s second poke restaurant when Hello Poke opened for business in the Far North Shopping Center complex which hosts the transcendent gourmet Chinese restaurant Budai as well as Aura, a European-Middle Eastern eatery. Very shortly thereafter, Poki Poki will open its second location, this one on Wyoming. Unlike recent culinary trends such as kelp, quinoa and cronuts, poké appears to have staying power. Attribute some of that to its healthful qualities, but the truth is, poké is absolutely, addictively delicious.

Hello Poké was initially slated to debut as Aloha Poké, but that name was trademarked by Chicago-based restaurant. By any name, this is a restaurant you should add to your “must try” list, especially if you haven’t previously tried poké. Hello Poké manager Maron Mangan told us he’s been surprised at how large a Hawaiian population Albuquerque has and he’s thrilled at how well the restaurant has been received by both poké veterans and novitiates. In the short time we visited, at least a dozen guests placed take-out orders, all customized to taste and preference.

Customization is largely what Hello Poké is all about. It’s also not “sushi in a bowl” nor is it a donburi bowl. Essentially guests are at liberty to be creative, first by selecting a base for their poké–either brown rice, white rice or organic mixed greens then by topping it with such proteins as tuna, salmon, albacore, shrimp, scallops, spicy tuna, spicy salmon, tofu (non GMO) and marinated tuna. Last to be added are sauces (house, house spicy, sweet Ponzu, Yuzu Miso or a gluten-free house) and toppings (crab meat, avocado, masago, green onion, seaweed salad, cucumber, pickled ginger, onion, edamame, jalapeño, roasted seaweed, wasabi, furikake, sesame seeds, spicy mayo, eel sauce and sriracha). The “house” fish is cubed yellowtail that’s been marinated for 12-24 hours in a blend of sesame seeds, onions and a salted seaweed.

My advice is “go wild.” My own make-your-own bowl had virtually everything that could fit on the bowl highlighted by the house yellowtail, spicy tuna and spicy salmon ameliorated by fiery complements such as jalapeño, wasabi, spicy mayo and sriracha. Because my bowl was absolutely brimming with content, it became difficult to mix all the ingredients with the rice. Consequently, the last third of my bowl would have been a bit on the dry sauce had Maron not suggested more spicy mayo and sweet Ponzu. Good call. My poké was a wholly satisfying, absolutely delicious dish to be repeated soon and often.

My Kim’s poké bowl was somewhat “less adventurous” and certainly more focused. Her choice of proteins was spicy tuna, shrimp and krab (imitation crab) on organic mixed greens with just a few toppings and no incendiary sauces. Only one thing could have improved her poké experience–noodles instead of rice and mixed greens. She suggested as such to Maron who promised to explore the possibility. Maron, by the way, previously served as sous chef at La Crepe Michel, but he would not acquiesce to serving nutella and banana crepes with the poké.

With only three weeks having elapsed since its launch, there are only five Yelp reviews on Hello Poké, but all five Yelpers accorded five-star ratings to what promises to be another well-received poké restaurant. It may not garner Yelps best restaurant in the country honors, but it may just contend for best in the city.