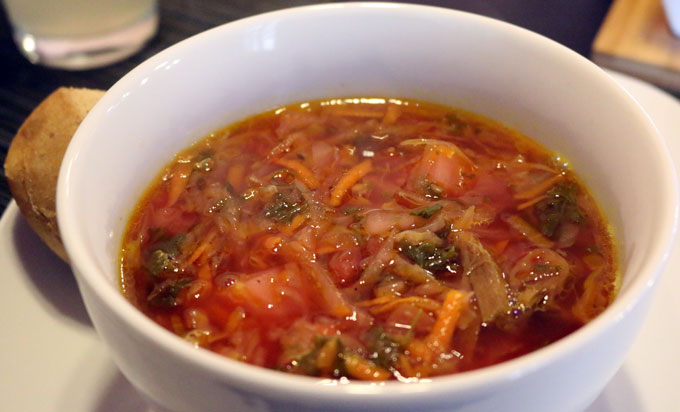 Countries and states may recognize borders but food doesn’t, especially today in an increasingly connected world where it’s possible to enjoy the cuisine of many of the world’s diverse and distant cultures without crossing a single border. Attribute the modern world’s dietary diversity to improved agricultural, transportation and preservation methods as well as rampant imperialism throughout the history of humankind. Consider the culinary influence of invading forces on the ancient nation of Armenia. During the course of its storied history, Armenia was invaded and occupied in succession by Persians, Byzantines, Mongols and Turks, all of whom left their mark on the cuisine.

Though we were pretty sure the menu at Aura European and Middle Eastern Restaurant in Albuquerque would offer diversity, the terms “European” and “Middle Eastern” cast a rather broad net. European, for example, could encompass Spanish tapas, Italian pastas, French crepes and so much more. Similarly Middle Eastern is a rather broad category that could describe the cuisine of several nations and cultures, not all of whom share similar palates. There is no way, we thought, any restaurant could possibly attempt such a broad brush approach to European and Middle Eastern cuisine. There’s just too much diversity to execute the concept well. A quick perusal of the menu assuaged our concerns.

Aura’s menu isn’t a compendium of all foods European and Middle Eastern (not even close), but it offers a nice representation of the diverse melting pot cuisine on which brothers Ash and Marat Darbinyan were raised in Yerevan, the capital of Armenia. If you’ve frequented Middle Eastern restaurants, you’ll find the menu more than vaguely familiar. You’ll recognize such appetizer delicacies as hummus, dolmas and crab cake. Lunch and dinner offerings such as Beef Stroganoff, Chicken Marsala, French Onion Soup and Russian borscht will also leap out at you as familiar favorites. So, too, will grilled lamb chops, kebabs and baklava. What you might not recognize, at least by name, are the premium wraps made with lavash bread, the Russian blinchik and the shashlik (grilled and skewerered meats and vegetables).

Aura is located in the Far North Shopping Center (just east of Budai Gourmet Chinese) in the space which previously housed Athens Eclectic Greek and other restaurants. The 86-seat restaurant has a very inviting vibe tailor-made for relaxed dining. Ash runs the front of the house while Marat runs the kitchen as he once did at the long defunct Charcoal Mediterranean Grill. The brothers Darbinyan have lived in Albuquerque since 2006, but Aura is the first eatery they’ve owned. It’s the culmination of a dream they’ve long shared and for which several restaurant jobs have prepared them. With amiable, professional service and a menu sure to please the discerning palate, the brothers have the formula that portends success.

Though there are probably several yet-to-be-discovered “must have” dishes on the menu, we certainly found one during our inaugural visit. The Aura Appetizer Plate is everything you could possibly want if you love dips. Picture hummus, tzatziki dip, spicy feta dip and an eggplant spread, a quadrumvirate of dip deliciousness served with pita bread wedges. What we appreciated most about the fabulous foursome is that each has a unique flavor profile–the tanginess of the tzatziki, the garlicky bite of the hummus, for example. Our favorite is the spicy feta dip which pairs the sharp, tangy sheep’s milk cheese with sweet-spicy red peppers. It’s a magnificent duo. The eggplant spread (roasted eggplant, red peppers, onions, parsley, tomato paste and spices) is the most interesting and multi-faceted.

In my seven years of serving as a judge at the Roadrunner Food Bank’s annual Souperbowl event, only one intrepid restaurateur (the brilliant Kevin Bladergroen at Blades’ Bistro) has ever attempted borscht, one of the most popular soups across Eastern European nations. There are dozens of variations, some with and some without beetroot, the ingredient which gives borscht its reddish hue. It’s been said that borscht isn’t about ingredients, it’s about spirit (aura?). Aura’s version is replete with finely chopped vegetables in a comforting broth and it’s served with a dollop of sour cream. It’s reminiscent of borscht we’ve had at some restaurants (including a Bohemian cafe in Chicago) and different from others. That, too, is encompassed in the spirit of borscht.

My first exposure to Beef Stroganoff was courtesy of the “Tree Frogs,” Peñasco’s Boy Scout Troop 512. During a camping excursion to the Jicarita wilderness, the experienced among us crammed lightweight dehydrated foods into our backpacks. Somehow Beef Stroganoff was among our provisions, albeit a dish no other Tree Frog would even sample. That turned out propitious for me. Reconstituted Beef Stroganoff began a lifelong love affair with the Russian dish. Though my Kim makes a better-than-restaurant version at home, seeing it on a restaurant’s menu rekindles my love for the dish. Rarely do we pass up the chance to order it at restaurants if only to compare it the one we make at home.

We had expected Aura’s rendition (tender grilled beef, yellow onion, mushrooms smothered in a sauce served with fusilli pasta) to be prepared the traditional Russian way which is with potatoes, not pasta. As the Web site To Discover Russia explains “Beef Stroganoff is at best a vague resemblance to the original dish, and at worst – absolutely different inexpressive concoction.” The version we make at home is with egg noodles, so we don’t exactly subscribe to tradition either. One thing we do at home and which many recipes advocate is thoroughly smothering the noodles with a rich, creamy mushroom sauce. Aura’s version is rather stingy with the sauce though what there is of it is tasty.

In 2013, the per-capita consumption of lamb among Americans was a meager one pound per person per year. Instead, beef is what was for dinner–to the Brobdingnagian tune of sixty-one pounds per person. As recently as 2011, the American Lamb Board reported that nearly half of American diners had never even tasted lamb. Blame this travesty on the latest war to end all wars, when rations for American servicemen in Europe included mutton (older sheep) passed off as lamb (typically slaughtered between the ages of 4 and 12 months). Servicemen hated the strong musky flavor of adult sheep and brought their distaste home with them. Understandably, many of them forbade lamb from their dinner tables, resulting in generations growing up unfamiliar with the delights of real lamb.

As an unabashed lover of lamb, it saddens me to learn that lamb is loathed, in many cases by diners who haven’t even tried it. Sure, that leaves more for me and for enlightened diners in virtually every nation outside the fruited plain, but passion, much like misery, loves company. If you like lamb, but your excuse for not trying lamb is that it’s too expensive, Aura features three grilled lollipop lamb chops for under twenty dollars, far less than what you’d pay for a steak. And if you’re phobic about its purported off-putting flavor, you’ll appreciate the well-seasoned preparation which complements without obfuscating, the distinctive, slightly gamy, more earthy flavor lf luscious lamb. These chops are served with your choice of one side and a salad. The grilled asparagus is an excellent complement.

In an increasingly connected world, it’s still gratifying to find there are still new and different foods to be tasted; to discover menus offering foods you’ve never heard of, much less tasted; to be titillated by different yet familiar spice combinations. That’s what you’ll find at Aura European Mediterranean Restaurant.