A Taste of the World in Rio Rancho 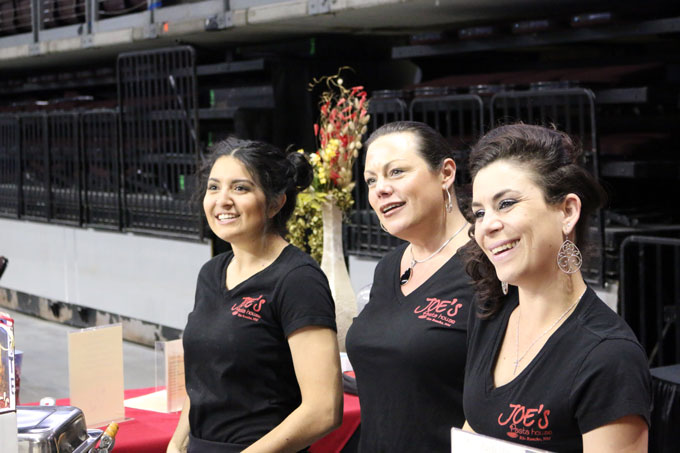 While the marquee may have welcomed guests to the sixth annual Taste of Rio Rancho, the mouth-watering event could easily have been called “A Taste of America in Rio Rancho.” In the six years which have elapsed since the inaugural Taste of Rio Rancho, the city’s culinary diversity has expanded significantly thanks to an influx of new restaurants cutting a wide swath across culinary cultures from throughout the country (and planet). Not only are Visionaries (my term for residents of the City of Vision) spending more of their disposable income on hometown restaurants, diners from across the metropolitan area are increasingly making their way to Rio Rancho restaurants where it’s not just about serving outstanding food; it’s about providing a great dining experience.

Those diverse dining opportunities were showcased during the Taste of Rio Rancho event where guests got to sample some of the unique culinary creations for which the city’s restaurants are renowned. Moreover, guests had the opportunity to interact with their favorite restaurateurs and staff. It speaks volumes about the familial climate in the city that many warm embraces and hearty handshakes were exchanged during those interactions. The ambiance was convivial, fun and filling, an escape from the cares and concerns of current times. Unlike (as many have expressed) less than desirable choices in the Presidential run, voters in attendance had two dozen delectable choices from which to select a People’s Choice award winner.

Garnering the most votes for the 2016 People’s Choice award was über chef Michael White and The Point Grill at Mariposa. Although open for only thirteen months (as of this writing), the Point Grill and its chef have acquired quite a following. Four miles north of the Santa Ana Star Center, the Point Grill offers spectacular east-facing views of four mountain ranges and a spectacular menu that’s surprisingly ambitious considering the restaurant’s smallish space. The bacon-toffee sundae alone is worth the trek.

Rio Rancho is home to a number of award-winning food trucks. The aptly named Cheesy Street has elevated the grilled cheese from simple comfort food to creative and innovative grilled cheese you will crave. Parked frequently at the Westside Marble Brewery the shamrock-green truck with its smiling crew has become a pied piper of sorts as long queues of hungry diners wait eagerly to place their orders. Many of us line up for the Dubliner with bacon while others are addicted to the uniquely wonderful caramelized Irish bread pudding.

Perhaps no restaurant in Rio Rancho exemplifies the friend and neighbor ideal as much as Joe’s Pasta House, the proverbial restaurant “where everybody knows your name.” Indeed, frequent guests are on a first name basis with the owners, chefs and the very best wait staff in New Mexico. Many of us who call Rio Rancho home can recount examples of acts of kindness performed without fanfare by owners Joe and Kassie Guzzardi, but those kindnesses aren’t performed for publicity or praise. They’re performed because the Guzzardis are looking out for their friends and neighbors in need.

Hot Tamales’ lives up to its mantra: “Our menu is simple but our food is extraordinary!” Showcasing red chile blended from pods and fire-roasted green chile, the menu lists about thirty items. Some Rio Rancho residents have tried them all, while others have a rotation of a handful of favorites such as the Hot Tamale Bowl (a large bowl of posole topped with a pork tamale) or the Tres Colores (red chile beef, green chile chicken and chile con queso rolled enchiladas). Hot Tamales is the sister restaurant of O’Hare’s Grille & Pub, a long-time favorite in the City of Vision.

With three locations in the Albuquerque metropolitan area, Squeezed Juice Bar is New Mexico’s only locally owned organic raw juice and smoothie bar. Visit the newest location at 1751 Rio Rancho Blvd. for fresh, healthy, raw foods that nourish the body using organic, locally grown products whenever possible. If you’re inclined to believe healthy and raw don’t sound very tasty, Squeezed! will make a convert out of you as it did dozens of guests who stopped by for a sample. Squeezed! is open seven days a week.

Serving the City of Vision since 2008, Fat Squirrel Pub & Grille may be patterned after an upscale English pub, but the 20,000 pennies covering the surface of the bar all sport President Lincoln’s countenance. Libation loving patrons belly up to the penny bar for their favorite adult beverage. Diners have a harder time making up their mind because the menu is replete with Irish, English and American dishes. The fish and chips are on a short list as best in the metropolitan area. Burgers, especially the El McGoldrick, are also much sought after.

There’s always something new and exciting going on at Cazuela’s Mexican Grill & Brewery, a restaurant which seems to be reinventing (or more accurately, adding to its repertoire) itself every few years. The restaurant added mariscos to an already formidable Mexican food menu in 2009. Three years later the restaurant added a brewery and tap room showcasing several award-winning adult libations then in 2015, pizza (scratch-made dough infused with New Mexico honey) became a dinner-time offering. We may not know what’s next for this innovative eatery, but we do know it’ll be good.

Can it really be twenty years since O’Hare’s Grille & Pub first opened its doors and extended a hearty Céad míle fáilte (an Irish greeting meaning “a hundred thousand welcomes”) to its guests? Many of the first guests to visit O’Hare’s return frequently to “gulp, gorge and gather,” the restaurant’s three word “mission statement.” Continuity is one of the hallmarks at O’Hare’s. The menu hasn’t changed much over the years, but that’s the way many guests like it. They especially like Thursdays when the daily special is Dublin Pot Roast in natural jus with roasted potatoes, roasted vegetables and grilled French bread.

In parts of the Midwest, it doesn’t matter how low the thermometer reads, it’s never too cold for custard. Rio Rancho residents are beginning to understand that obsession. Vanilla Bean Frozen Custard has introduced us to premium ice cream that’s thick, rich, creamy and made fresh daily. Vanilla Bean offers vanilla, chocolate and flavor-of-the-day ice cream and if it ever does get too cold for custard, you can also enjoy specialty popcorn, freshly made fudge and candies.

In April, Franchise Business Review named Pizza 9 one of the top 200 franchises in America for 2016. Several months later, the New Mexico Restaurant Association awarded Pizza 9 the Restaurant Neighbor Award in recognition of its community involvement. Serving Rio Rancho since 2009, Pizza 9 has converted many residents of “Little New York” to Chicago-style pizza and to Italian beef sandwiches. Owner Vu Nguyen has expanded his restaurant empire with the 2016 launch of 99 Degrees Seafood Kitchen in Nob Hill. Rio Rancho residents are already clamoring for him to expand to Rio Rancho.

“Catfish, BBQ, gumbo, po boys, jerk chicken, carne adovada fries & more!” That’s what the banner in front of K’Lynn’s Southern & Cajun Food reads. The “carne adovada fries” may have you doing a double-take, but they’ll also have you making repeated visits to the city’s first and only Southern and Cajun food restaurant. So will the gumbo, rich with Andouille sausage and chicken. So will the pecan pie covered with a bourbon sauce. KLynn’s offers not only Southern food, but Southern hospitality.

Fifty years after its founding, Rio Rancho has already become New Mexico’s third most populous city. One of the architects of its growth and success has been Matt Geisel who, for eight years, served the city in various capacities, most recently as Economic Development and Business Relations Manager. In early October, Matt was selected by Governor Susana Martinez to serve as the state’s Economic Development Secretary, a cabinet post for which he’s imminently qualified. Matt was instrumental in the growth of the Taste of Rio Rancho and is primed to do great things for the Land of Enchantment.