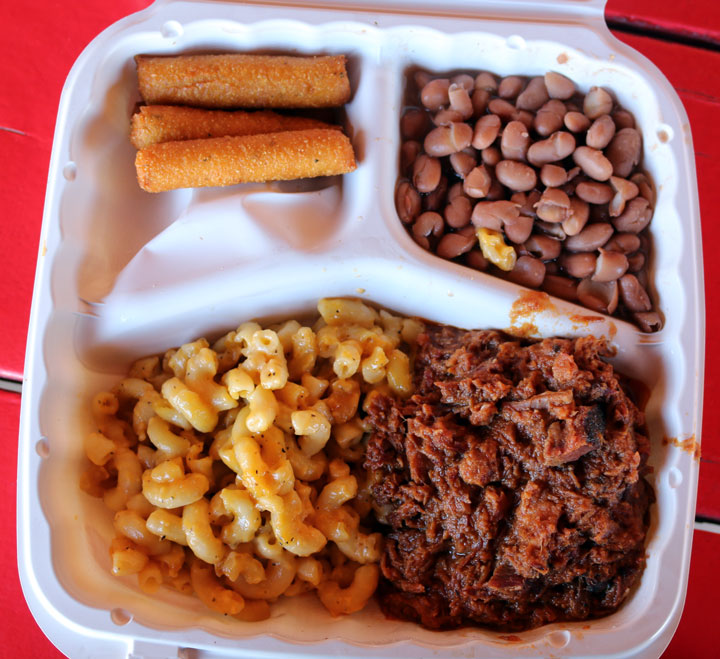 Depending on your lifestyle choices and temperament, some of the slogans emblazoned on bumper stickers or tee-shirts seen over the years at Rio Rancho’s annual Pork & Brew will either make you laugh or rankle your ire. “Meat is murder – tasty, tasty murder.” “Animal rights – Animals have the right to be tasty.” “Gardening: Cultivating a piece of land in order to barbecue.” “If you can’t stand the heat, go get me a beer!” Obviously no similarly themed bumper stickers or tee-shirt slogans will ever be seen at vegan or vegetarian festivals. They are, however, part and parcel of my former colleague Matt Mauler’s casual (and for that matter, formal) attire. You might remember Matt from my review of The Acre. More than anyone you’ll ever meet, he celebrates meat in all its magnificence while damning and cursing any vegetable that isn’t fried. He also loathes vegans and vegetarians.

Several years ago, Matt told me about a barbecue restaurant in Carlsbad which prepares meat “just like back home.” Back home for Matt was Paducah, Kentucky. It was “almost heaven, the best place in the world” according to the proud Bluegrass State transplant and self-professed redneck. Some of our other colleagues liked to tease the irascible Matt with references to Hazard county (home of Daisy Duke), Deliverance and even Bugtussle (which is actually in Missouri). His retort: “at least we have good barbecue,” a dig at what he perceived to be a dearth of great barbecue restaurants in the Land of Enchantment…except for that one Kentucky style barbecue restaurant in Carlsbad.

Matt would know Kentucky barbecue greatness. On the fourth Friday and Saturday in September, his birthplace celebrates Old Market Days, a charitable event which includes a contest called “Barbecue on the River.” In her wonderful tome Food Festival USA, my dear friend Becky Mercuri explains that “if a spirit of hospitality and goodwill accompanied by great barbecue appeals to you, you’ll want to be in Paducah, Kentucky during the annual Old Market Days.” “And if you can’t make it to Paducah,” Matt advised, “drive six hours south to Carlsbad and get the next best thing.”

“The next best thing” comes from the Red Chimney Bar B Que on North Canal Street. It’s nearly impossible to miss, especially if you’re driving by with your windows down. That’s how your nostrils will imbibe the hazy smoke plumes emanating from Red Chimney which waft into your motorized conveyance like a sweet Kentucky smoke signal beckoning you to try a combo platter. Similar to its rival Danny’s Place, the parking lot at the Red Chimney is always packed. The vehicle of choice in Carlsbad appears to be large, high-profile trucks, contemporary horses for modern-day cowboys.

Danny and Kathryn Fowler launched Red Chimney in 1952 and ran it until 1993. A year later, under the auspices son Ted, the restaurant was rebuilt into a more capacious log cabin on the same property. Today this bastion of bodacious barbecue is into its third generation of family ownership and tradition with Ted’s daughter Jill and her husband Edgar at the helm. Kentucky-style barbecue was well-received by Carlsbad six decades ago plus and remains beloved today. Along with the aforementioned Danny’s Place, Red Chimney is a destination restaurant, another reason to visit the gateway to the world’s most spectacular caverns.

So what distinguishes Kentucky barbecue from barbecue anywhere else in the fruited plain? Author Ken Berry explains that in Kentucky, “we cook up just about any animal that has meat on it.” That includes mutton (sheep over a year old) which wasn’t to be found on Red Chimney’s menu. Nor was burgoo, which Berry describes as an “everything but the kitchen sink’ rich stew made with several meats and vegetables.” Kentucky is a large state with regional specialties so why lament what’s missing from the menu. Our focus became enjoying the very interesting, very inviting menu which has earned aficionados for decades.

My choice was a plate called Piled High Chop Mix, chopped brisket, pork and ham mixed with the restaurant’s signature barbecue sauce and served with two sides (smoked mac and cheese, hush puppies and pinto beans for me). Don’t mistake this for a typical three meat plate in which the trio of meats are separate entities. “Chop Mix” means the finely chopped meats are jumbled together in a tangle of meaty tendrils. Tossed in this manner and heavily sauced, it was a challenge to discern where one meat ends and another starts. Every bite included a bit of each. It was an interesting melange, but for me a one-time experience. The hush puppies were interesting, too, wholly unlike those we experienced throughout Mississippi. Instead of deep-fried orbs, these were cylindrical (cigar-like) in shape. The smoked mac and cheese was my favorite thing on the plate.

My Kim enjoyed a Fort Knox Potato, described as “the potato that holds something better than gold.” Instead of gold, the potato is loaded with smoked chop mix, butter, sour cream, Cheddar cheese and crisp red onion. The smoked chop mix was the element of this football-sized dish Kim liked least. What she enjoyed most was the through-and-through tenderness of the potato and the “usual fixings” of butter, sour cream and Cheddar cheese. Had we read the menu more closely, we would have seen that another meat could have been substituted. Next time…and there will be a next time.

One of the reasons we’re so hopeful for a return visit is the cobbler, available in apple, cherry and peach. Have it a la mode for an even better taste experience. It’s a housemade sourdough cobbler very popular among guests. The interplay of sourdough, fruit and creamy, cold vanilla ice cream makes for a very enjoyable experience. Oh, and to quell the thirst inherent with visiting the desert southwest, have a chocolate shake with your meal. It’s served thick, cold and absolutely delicious.

Red Chimney doesn’t have much, if anything, for vegetarians and vegans. It truly is an altar for meats. Kentucky barbecue is good stuff and Red Chimney is where you can get it.