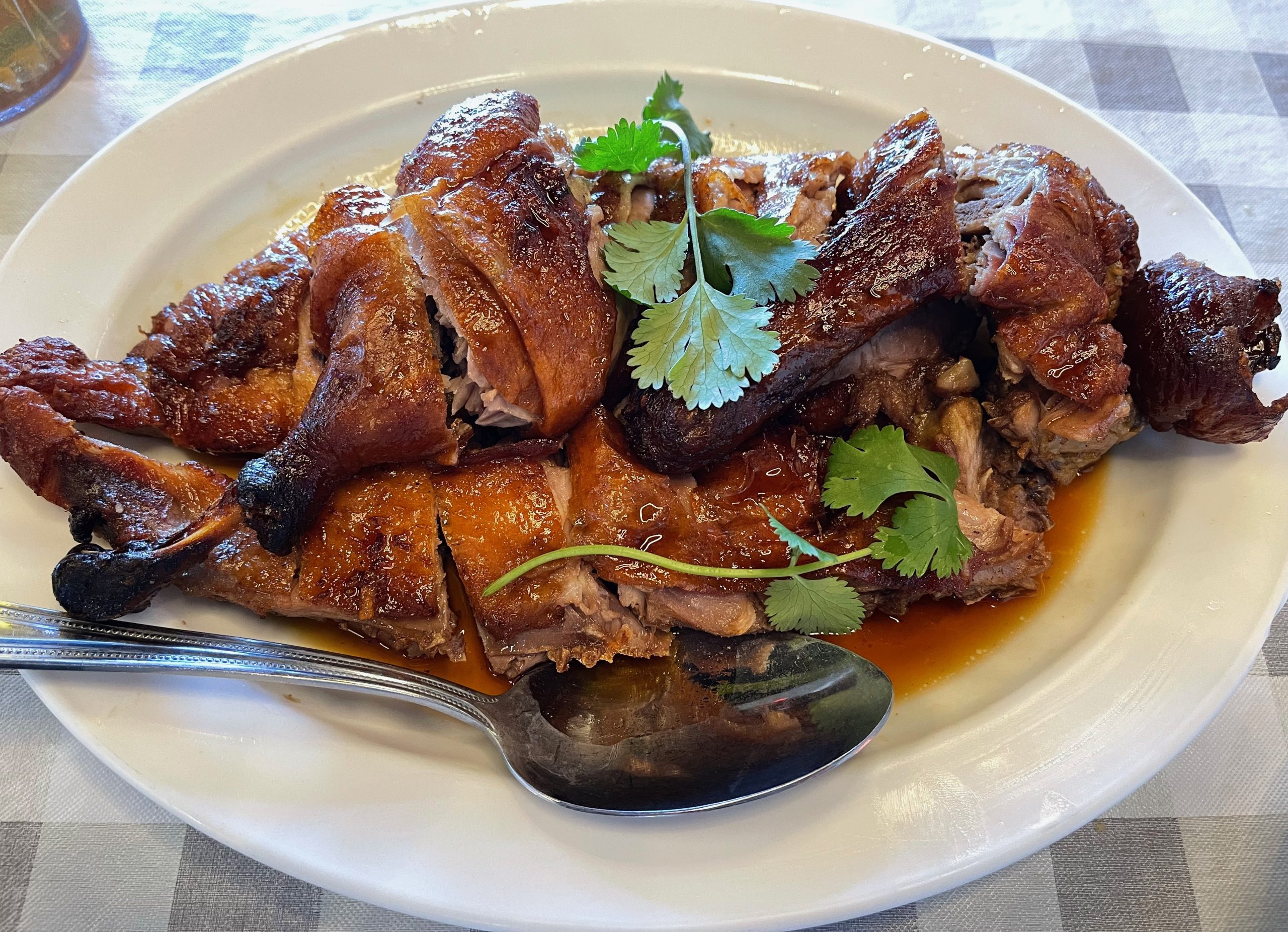 Several years ago Mike Muller, my friend and former colleague at Intel was sent to Chengdu, the capital of the providence of Szechuan in Southwest China.  It was an assignment I would have loved.  Unfortunately I could barely spell the name of the enterprise asset management application Mike would be training our Chinese counterparts how to use.  From an application and business knowledge perspective, Mike was the perfect man for the job.  From the perspective of culinary culture, Intel should have sent me.  Our counterparts may not have learned much about the asset management tool, but we would have had a great time feasting on the incendiary delights for which the Szechuan region is famous.

Mike is “bizarro Gil,” my polar opposite when it comes to dining.  He’s absolutely brilliant, hilariously funny and a great family man, but to him adventurous dining would be using honey mustard on his chicken nuggets instead of barbecue sauce.  Mike often joked about creating a blog in which he would publish reviews of all his favorite chain restaurants:  Olive Garden, Applebee’s, Mimi’s and the like.  He nearly broke my heart when he told me about a trip to Santa Fe which culminated in a meal at Chili’s instead of one of the wonderful restaurants for which the City Different is known.  You could almost hear Mike’s stomach roil when I would describe some of the meals that define my gastronomic tendencies.

During Mike’s ten-day trip to Chengdu, most of his meals were at the American hotel in which he stayed…not that he minded too much.  That hotel, he told me, prepared excellent burgers and steaks.  In his defense, when Mike did wander out, the streets of Chengdu weren’t especially Chamber of Commerce worthy.  As might be expected for a city of twenty-million souls, traffic congestion and air and water pollution were rampant.  Local street markets and merchants weren’t necessarily sanitary and the bill of fare was comparable for weirdness with the array of aliens bellying up to a dive bar in the original Star Wars movie.

It goes without saying that the street market displays of the menageries of edible delights with all their mystery and intrigue would have been in my wheelhouse. Szechuan cuisine is an answered prayer for those of us who long ago wearied of sweet and sour everything. In the 1988 comedy Beetlejuice, a new homeowner and urban sophisticate who pursues a more rural life, asks “I can’t believe we’re eating Cantonese. Is there no Szechuan up here?”  Despite my love of some Cantonese cuisine, it’s Szechuan cuisine that better sates my soul.

Because the province of Sichuan has such high humidity and is prone to rainy and overcast days, its residents have long enjoyed punishing, mouth-numbing spicy food. It’s thought that spicy food helps draw out excess moisture and cools the body. Two ingredients in particular are complicit in creating the tingling sensations of Szechuan cuisine: native Sichuan peppercorns, which also have a citrusy buzz; and chili peppers, which were brought over to China by Portuguese traders from South America in the 17th century.  In combination, these two pungent ingredients are not only a hallmark of Sichuan cuisine, they lend themselves to another export increasing in popularity across the spacious skies: spicy hot pot.

Szechuan’s cuisine is much more diverse than its “hot-and-spicy” reputation suggests. Sure, there are dishes that hiss and spit with chili and Sichuan pepper, but there are also more “tame” flavors: mild, fruity chilis;  the placating melody of sweet and sour; and the irresistible complexity of “garlic paste” dishes. Many Szechuan dishes aren’t spicy at all.  Still, it’s largely because of its hot, spicy flavors that in recent years, Szechuan cuisine has exploded worldwide.  Best of all, for purists and masochists like me, classic Szechuan dishes such as kung pao chicken and dan dan noodles are no longer “dumbed down” for Cantonese or Western palates, but served up in all their fiery, lip-tingling glory.

When we learned of the February, 2022 launch of Nio Szechuan on Montgomery just east of Louisiana, we (or at least the volcano-eater in our family) hoped the emphasis of this restaurant would be on the hot and spicy cuisine for which the Sichuan province is known.  My hopes were bolstered upon discovering Nio Szechuan is owned and operated by the partnership group that owns Chengdu Taste in Las Vegas.  Chengdu Taste was named one of the “18 Essential Chinese Restaurants in Las Vegas” by Eater.  It’s got four star ratings on both Yelp and TravelAdvisor.

Our server did his best to try convincing us to order the hot and sour soup, but my elotes enamored bride wanted the chicken creamy corn soup.   We expected a smallish bowl of soup as most Chinese restaurants serve.  Instead, a swimming pool-sized bowl of opaque amber elixir was delivered delivered to our table.  It wasn’t quite as replete with the named ingredients as we would have liked, but with a little doctoring the following day, it  was much better.  Yeah, you shouldn’t ever have to doctor any restaurant offering, but we tend to do it quite  bit courtesy of the Dr. Jekyll in me.

An icon of a piquant pepper signifies menu items considered hot and spicy.  Only two items on the appetizer menu have that designation.  My Kim didn’t want to risk scalding her tongue with either of them.  Instead we enjoyed an order of (five) fried chicken wings.  The wings are meaty and salty with a thick (but not overly so) coating.  No accompanying sauce was provided.  None was needed.  When you’ve had your fill of left wing and right wing nonsense, Nio Szechuan’s fried chicken wings will make you forget politics.

My Kim jumped almost immediately to the Chef’s Specials in search of roast duck.  Available in half- and full-sized, the roast duck is deliciously unadorned.  Great roast duck doesn’t need to be wrapped up in pancakes. Nor are hoisin or plum sauce needed.  Crispy skin gives way to tender, juicy meat with a slight hint of smoke and plenty of flavor.   Tender, succulent duck is accompanied by a subtle sauce that ameliorates the duck’s inherent flavors; the sauce doesn’t obfuscate any of those flavors.  Few things in the world are as satisfying as roast duck, gloriously crispy and golden…a true melt-in-your-mouth treasure.

When hosting the Travel Channel show Man v. Food, television personality Adam Richman quipped “A good spicy challenge strikes a balance between flavor and fear.”  Although Richman probably doesn’t enjoy spicy food for the sake of spice alone, the premise of the show was for him to take on culinary competitions.  Mammoth monstrosities such as a seven-pound burrito didn’t elicit fear as much as spicy food did.   He would have enjoyed (not feared) Nio Szechuan’s spicy fried chicken, a fiery blend of thinly breaded poultry, potent peppers and chili oil.  This is an absolutely delicious dish, everything I expected from a Szechuan restaurant practicing traditional culinary arts that optimize flavors.

Nio Szechuan may be the closest some of us will get to Chengdu in the Chinese province from which some of the best and most incendiary cuisine in the world emanates.  It’s comforting to know it’s there when we crave and need it.