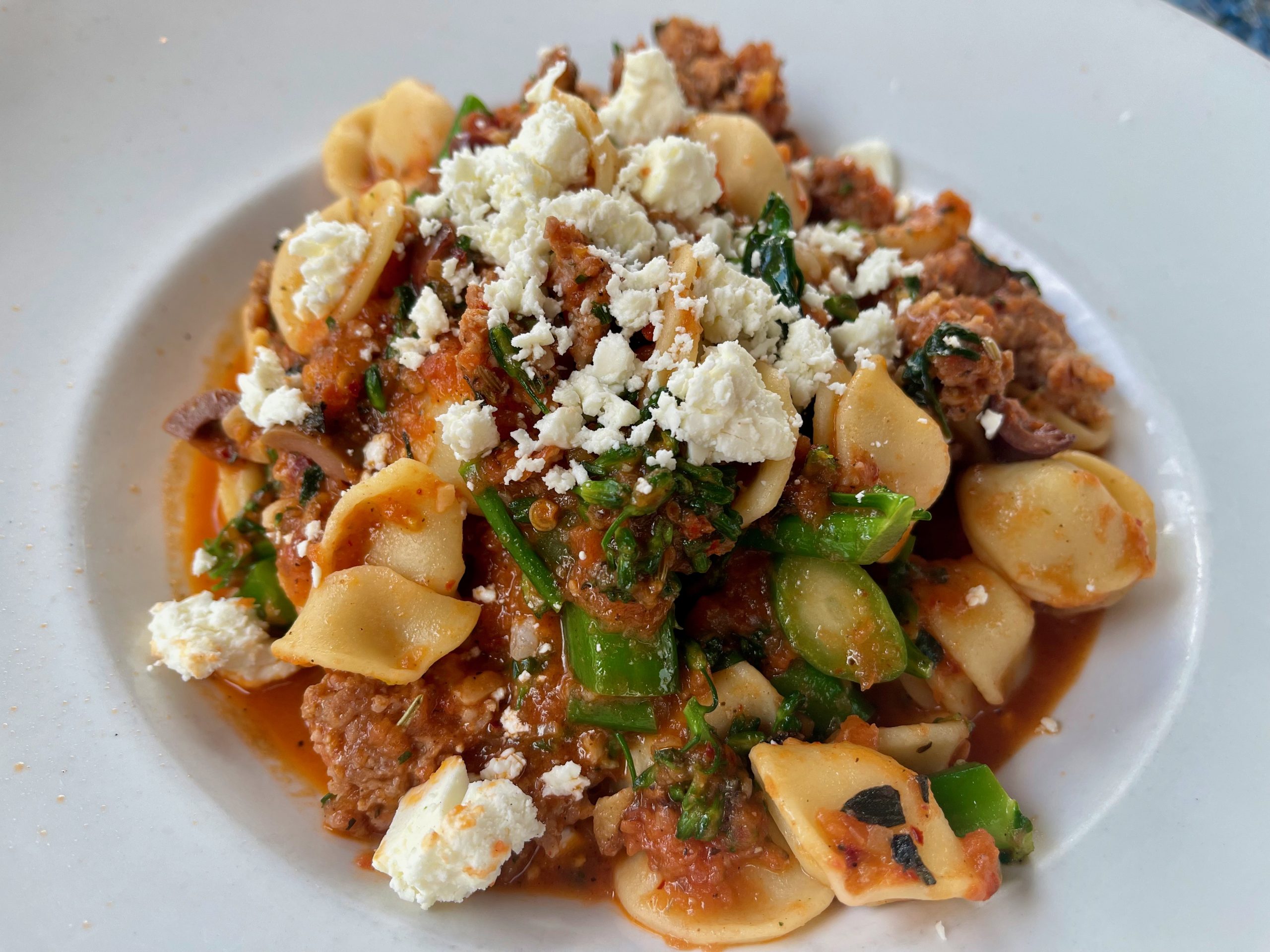 You’re probably expecting my review of an El Prado restaurant named “Medley” to start with a musical theme, maybe likening the menu to “a musical composition made up of a series of songs or short pieces.”  That would be an easy way to do it, but it would also be slightly disingenuous.  Medley isn’t named for anything having to do with music and though the menu is akin to a composition, the restaurant and wine shop are named for Chefs-Owners Colleen and Wilks Medley.  Medley is also, according to the restaurant’s website is a philosophy–“something good, for everyone.”

That something good absolutely starts with its incomparable setting.  Almost equidistant between Taos Plaza and the Taos Ski Valley, Medley is situated in what maps will tell you is El Prado (the meadow).  Your eyes will tell you you’re in an idyll of vast open plains and depthless skies.  Whether attired in their traditional cerulean blue or nature has chosen to paint those skies in a sunset panacea of colors that awaken the soul, those skies will evoke joy, contemplation and maybe even melancholy (at the thought you may have to return home to a less spectacular setting).  Even when storm clouds obscure the sun, their variegated and undulating shapes are almost hypnotic as shades of grey supplant those of blue.

As you approach Medley, take a moment to face the northeast vista.  The scale of imposing snow-capped mountains reaching for the sky    present a scale and scope that seems almost infinite.   Whether you grew up graced by these towering megaliths or you’re visiting from the flatlands, it’s hard not to be overwhelmed by such grandeur. Infinity also takes on new meaning when gazing across the expanse of sage, juniper and desert grasses that end only when they reach the mountains.  When soul-touching sunsets give way to a night air swathed in a canopy of stars, the views are no less spectacular.

Legendary artist Georgia O’Keefe once wrote described her isolated idyll in New Mexico as “the most beautiful place you can imagine.  It’s so beautiful there.  It’s ridiculous.”  Similarly, author D. H. Lawrence was so inspired by New Mexico that he settled north of Taos.    He wrote “In the magnificent fierce morning of New Mexico one sprang awake, a new part of the soul woke up suddenly and the old world gave way to a new.  New Mexico in general and maybe the Taos area in particular has that effect on visitors.  Every time we visit Taos county where I grew up, it’s like reawakening.  I never cease to be amazed at and mesmerized by the unequalled beauty.

The previous unpaid commercial for tourism in El Prado was brought to you by a very contented diner who in my panegyric appreciation for the beauty of my home state almost forgot this is supposed to be a restaurant review.  With Medley, it’s both a case for going to El Prado for the views and finding a wonderful meal or going to Medley for a wonderful meal and discovering incomparable views.  It’s the best of both worlds.  Twice voted “best restaurant” in Taos by locals, it’s not all about the food nor is it all about those stunning vistas, but a combination of the two that position Medley for long-time success.

Because Medley’s capacious dining room isn’t Dude-friendly, we enjoyed our dinner in one of the restaurant’s two outdoor patios.  Even if our debonair dachshund The Dude hadn’t been with us, we’d rather enjoy those uninterrupted views than glance at some flatscreen.  Medley doesn’t take reservations.  Dinner service starts at 4PM and you’d better get there soon thereafter because the patio packs pronto. As usual, The Dude was as popular with women who waited with us as Elvis had been when his gyrating hips got him censored from national television.

The composition of the menu bespeaks of a sophistication and approach not commonly seen in these parts.  After matriculating at some of the country’s best culinary schools (Wilks attended the Culinary Institute of America and Colleen studied at Johnson and Wales University), the chef couple worked under some of the best chefs in New York City, Washington, D.C. and Los Angeles.  Their experiences allowed them to hone their skills and develop their culinary style.  In 2015 the couple relocated to Taos, a community they both love.  In short order, they’ve partnered with local growers, small businesses and community non-profits.  The list of farmers, purveyors and growers with whom they’ve partnered is impressive.

So is the menu!  It’s as captivating as a good novel.  Within three categories–Soups & Salads, Small Pates and Mains–you’re sure to find nine or thirty things to love.  Make sure you start out with the bread plate, warm, sliced ciabatta with whipped butter.  It’s a four dollar indulgence that may remind you it wasn’t that long ago (pre-Cabrona virus?) that bread was complimentary.  Frankly, complimentary bread didn’t always warrant compliments.  This one does.  Butter spreads easily on the pillowy soft ciabatta.  We had hoped to hold some of it back in anticipation of sopping up sauces, but it was just too good.

Among several must-have small plates is elotes (charred sweet corn-on-the-cob, samba butter, cotija cheese, cilantro-lime salt).  Sambal, often described as a hot and spicy Indonesian relish imbues the sweet corn with an incendiary kick–so much so that there’s just a hint of sweetness remaining on the corn.  That’s good for me, a sambal zealot; it wasn’t good for my Kim who thinks ketchup is spicy.  The cotija acts as a sort of fire extinguisher, lending salty richness that cuts the heat just a bit.  Elotes are one of my favorite autumn foods though Medley’s version doesn’t have the horno-steamed flavor of autumn with which I grew up.  Still, elotes are an elevated starter on any menu.

Seeing a heirloom tomato and watermelon gazpacho soup on the Soups & Salads section of the menu reminded us of the cartoon depicting a woman attired in her Victorian finery complaining to her server, “Waiter, this soup is cold.”  The waiter responds “It’s gazpacho, ma’am.” Her reply “Very well, Gazpacho, this soup is cold” speaks volumes about her knowledge of cold soups.  In truth, most of us equate soup as something warm to be enjoyed during cold days.  We don’t always remember there are cold soups that have a cooling effect during warm weather days.  Among the most famous is gazpacho, a soup which originated in Spain.

Medley’s heirloom tomato and watermelon gazpacho soup probably wouldn’t be very good served hot.  As a cold soup, it’s among the very best in New Mexico.  Aside from the named ingredients, this cool elixir also includes basil, mint, toasted pistachio and feta.  It’s not every dish in which every single ingredient actually expresses itself on your taste buds as well as this soup does (although it does help if you’re able to distinguish the subtle differences between mint and basil).  Contrasting flavors–especially the sweetness of the refreshing watermelon and the tangy, sharpness of the feta–pair magnificently as do contrasting textures such as the toasted pistachio and the soft feta.  This is a summer soup you can enjoy any time of year.

It’s not often you see New Zealand Lamb chops on a “small plates” menu even though most lamb chops are small compared with pork and beef chops. Those of us who love lamb chops more than any other type of chop know it’s not about size.  It’s about flavor and that’s where lamb chops surpass their carnivorous counterparts.  Not only that, lamb is healthier.  It’s also a lot more tender than other meat.  And don’t say it’s “gamey.”  It’s got a more intense flavor than other meats and because lamb is usually grass-fed, it puts you in touch with nature.  Medley’s lamb chops are drizzled with a golden raisin gastrique and is served with crispy leeks reminiscent of matchstick fries.  The sweetness of the gastrique has an interesting and delicious counterbalance to the lamb.

The relative smallness of the lamb chops meant I could help my Kim with her entree, the rock shrimp and fennel sausage orecchiette.  Where my chops were small, this entree was easily large enough for the two of us.  Moreover, it was composed of ingredients we both love.  In addition to those on the entree’s name, there was broccolini (vastly underused in New Mexico), tomato, oregano, olives and feta. This dish would be the showpiece of many an Italian restaurant with its wonderful diversity of flavors and ingredients.  For my Kim, fennel-rich sausage is like being home in Chicago.  For me, the feta and olives provided saltiness without the customary New Mexico tradition of over-salting most dishes.  Orecchiette, an Italian small ear-shaped pasta is delightful to contemplate and so glorious when sauced just right.

Writer Anne McManus shares an undeniable truth about desserts: “It’s the finale. It’s the last impression. A bad dessert can ruin the meal.”    A great dessert, on the other hand, can be the highlight of an otherwise forgettable meal.  Ideally, a memorable meal should culminate in an equally (or nearly as good) tremendous dessert.  For my Kim, the tres leches cake was as good as anything else we had during our meal.  It may resemble a moist three-milks cake surrounded by a strawberry moat, but that tangy strawberry sauce lent a wonderful contrast to the ultra-rich, creamy cake.

A post on Medley’s Facebook page declares “Medley is the perfect place to either appreciate that you live in Taos, enjoy while you’re visiting Taos, or bring your out-of-town guests to take in the beauty of Taos with some amazing food.”  I wish I’d said that.