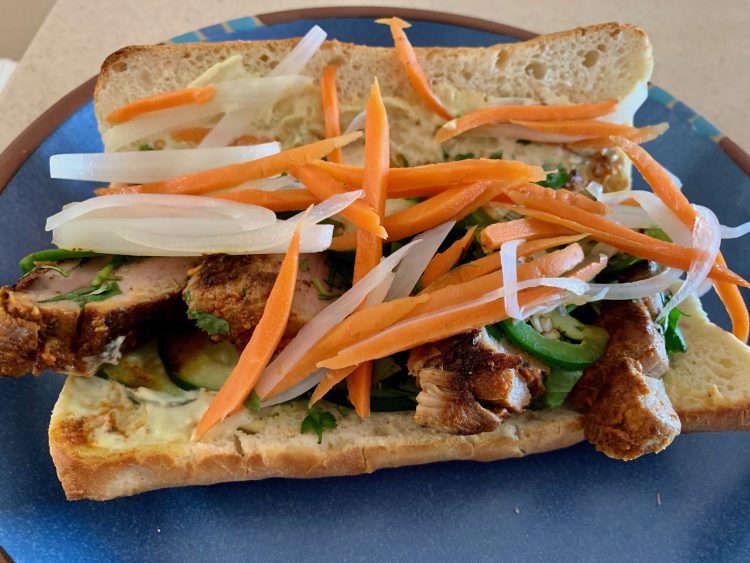 If a tree falls in a forest and no one is around to hear it, does it make a sound?” Ask a physicist and you’ll get an earful about quantum theory, wave function, subatomic particles and rarefactions in the air. A philosopher might posit the plausible premise that when there is nobody around, the falling tree makes no sound at all–a premise achieved by interpreting the word “sound” to mean a human experience rather than a physical phenomenon. With well-practiced prattle and deft circumlocution, a politician would probably attribute culpability for the tree having fallen to “the other side of the aisle.”

Ask this blogger and not only will you get a resounding “yes” to the oft-posed philosophical thought experiment, you’ll be given an analogical example of that tree reverberating so loudly that the forest was unable able to contain its sonorous, concordant melody. Okay, I’m waxing philosophical here. In my analogy, The Point Grill in Rio Rancho is the tree and the Albuquerque metropolitan area is the forest. Not getting my point? For nearly three years, voices crying out in the wilderness (literally) argued that The Point Grill was not only one of the very best restaurants in Rio Rancho, it was among the best in the Duke City area. Though our cries didn’t entirely fall on deaf ears, far too many diners—particularly in the Duke City—wouldn’t venture to “where the bodies are buried.”

That’s how some people actually described the drive to The Point Grill. Adjectives such as desolate, barren and mostly “too far away” were also used—despite the fact The Point was actually only about four miles north of the Santa Ana Star Center. From the intersection of Rio Rancho’s Unser and Southern Boulevards, The Point was almost equidistant to the Cottonwood Mall. Best of all, there were far fewer traffic lights and no such thing as urban traffic snarls. Beyond the Santa Ana Star all you encountered was a vast expanse of sage and sand as far as the eyes can see on both sides of the two lane highway. To some, it was a scenic drive. To others, a drudgery.

Despite the seclusion, isolation, or get-away-from-it-all idyll (your choice) of his restaurant’s far northwest Rio Rancho location, it didn’t take long before Chef Michael White’s talents began to garner attention. Like the proverbial tree falling in the forest, his achievements resonated loudly. In the 2016 Taste of Rio Rancho, The Point Grill got the most votes in earning the People’s Choice award. In 2018, Chef White earned The New Mexico Restaurant Association’s Chef of the Year honors. Also in 2018, his blended burger creation was among the twenty top vote-getters (from among hundreds of burgers) in the James Beard Foundation’s “Blended Burger Project.”

In September, 2018, Chef White closed his Lilliputian gem. Two months later, he launched The High Point Grill at the space on Coors which once housed Nicky V’s. The connotation of the new name is that a visit to the restaurant should be the “high point” of your week or your day. The additional space has allowed an expansion and upscaling of the menu and the introduction of seasonal dishes. Moreover, it’s given Chef White a much larger platform (3,600 square-feet) to showcase his prodigious talents. He’s now able to deliver on his promise of handmade pasta, cheeses pulled on the premises and housemade sauces and dressings. Now that he’s no longer at the “hinterlands,” Duke City diners no longer have the flimsy “it’s too far” excuse to fall back on.

And because goading you into visiting The Point Grill didn’t work, I’ll let the menus at High Point make the case for you to visit soon. Make that “menus” as in plural. There are menus brandishing tapas and munchies, greens, paninis, baked mac and cheese, gourmet burgers, handmade pasta, the chef’s signature specials, desserts and beverages. Sure you’ll ponder the menus, but you’ll also ponder why the heck you didn’t drive just a few miles further for some of this stuff. Okay, that wooden horse has been beaten. Consider yourself admonished for not having visited The Point then congratulate yourself for visiting The High Point.

19 January 2019: While you’re pondering the rest of the menu, indulge in the charcuterie (cured meats, marsala candied onion, roasted red pepper, balsamic and brie, marinated fresh mozzarella; assorted marinated olives and toasted flatbread) served on a wooden board. It’s a beautiful, multi-colored, multi-textured, multi-flavor notes composition featuring an octet of indulgence. It’s a challenge to single out any particular stand-out since all were delicious on their own or in combination with another. It’s easier to call attention to the lack of contrast among the cheeses. Both were soft and mild. We would have preferred varying degrees of sharpness…even if we’d never kick mozzarella or brie off our plate.

19 January 2019: Mac and cheese has come a long way since our childhoods when the dish came out of a rectangle box with dry macaroni and a powdered flavor package replete with sodium phosphate. It’s grown up and become an adult indulgence, too. The High Point Grill does mac and cheese seven different ways, all tempting. Perhaps the most decadent and rich is the crab mac (lump crabmeat, creamy brie, scallions and a touch of green chile). It’s one of the best mac and cheese dishes you’ll find anywhere. Most surprising is how well the delicate crab goes with the pleasantly piquant green chile. The chile doesn’t obfuscate the unique sweet-brininess of the crab at all. Then there’s the creamy brie with its buttery, mild and deeply satisfying notes. It’s bowl-licking good.

19 January 2019: My Kim enjoyed the marsala candied onions on our charcuterie plate so much that she ordered the marsala patty melt (minced marsala candied onions and Havarti between two pressed patties; with jalapeno-tomato jam) so she could enjoy even more of them. The patty melt is one of seven items on the burgers menu. All burgers are made from one-third pound of 100-percent Akaushi beef and are served with hand-cut fries. While the beef has an exceptionally rich, buttery-fatty flavor characteristic of Akaushi beef, it does tend to overwhelm the candied onions which melded seamlessly with the Havarti as both have a sweet flavor profile. It didn’t dawn on us until later that a little mustard would have cut the richness of the beef.

8 May 2020: Call me a bounder or a cad if you will, but it’s not beyond me to celebrate when the chips and salsa we order as an appetizer features a salsa that’s too piquant for my Kim.  That means more (or all) for me.  My Kim will typically cry “no mas” after one or two valiant attempts to keep up with her fire-eating husband.  Me, I’d probably enjoy salsa if it was made with Agent Orange and Napalm.  That’s just the New Mexican in me.  Luckily The Point Grill’s salsa isn’t made with Agent Orange and Napalm.  It’s got plenty of piquancy, but most native New Mexicans should be able to handle it.  Moreover, it’s got plenty of palate pleasing flavor.  The chips are crispy, low in salt and formidable enough for Gil-sized scoops (about a shovel full).

8 May 2020: There are dozens of French onion burger recipes on the internet, most of them purporting to capture the inimitable flavors of French onion soup, all of them slightly different.  Despite the seeming popularity and novelty of French onion burgers, the very first one I experienced in Albuquerque was at The Shop one week before the Corona lockdown.  It was phenomenal, one of the very best burgers to cross my lips in 2020.  My eyes nearly popped out of my head upon seeing a French Onion Burger (with Marsala candied white onions and melted french brie) on High Point’s delivery and take-out menu.  Marsala wine (a Spanish dessert wine which is especially good for caramelizing savory ingredients and making sweet, viscous sauces) transforms the onions into sweet tangles of pure pleasing deliciousness.  The brie is a perfect complement, nutty and earthy. The hand-formed Akaushi beef has “smash burger” qualities in that the exterior is seared magnificently while the interior is moist and delicious.  Altogether, High Point’s French onion burger is a masterpiece worthy of its name.

8 May 2020:  Should my Kim ever hear someone describe the Point Grill’s 505 Banh Mi (Chimayo red chile crusted pork tenderloin, cucumber, pickled carrot and white onion, jalapeno, cilantro, and green chile aioli) offering as “cultural appropriation,” she might give them a tongue-lashing.  Chef White’s rendition is certainly proof that you don’t have to be Vietnamese to create a fabulous banh mi.  It’s certainly not a replica of any banh mi you’ll find at a Vietnamese restaurant, but it definitely honors the spirit of a banh mi.  One of the immediately obvious differences is the size of the pork tenderloin, almost medallion-sized slices about five times the thickness of the thinly sliced pork you’ll find on a banh mi.  Instead of daikon, the 505 Banh Mi is made with white onion and in lieu of pate, it’s got  green chile aioli.  Despite the differences, you’ll swear you’re indulging in a true to Vietnam version.

19 January 2019: Many chefs consider baking their toughest challenge, especially when it comes to dessert. That’s not the case with Chef White whose dessert offerings at The Point consistently left us in awe. The High Point menu only lists three desserts, but if past performance is any indication, you’re going to love them. The caramel apple cobblecake (moist, bread pudding-style apple cobbler with brown sugar ice cream and granola) is absolutely wonderful. As with many of the Chef’s desserts, it’s really a combination of several dessert favorites (in this case bread pudding, cobbler and ice cream) that work very well together. This is a great one!

There’s no sense lamenting what you missed by not visiting The Point. You can make up for that by doubling up on your visits to The High Point. It probably will be the high point of your day…or week…or month.