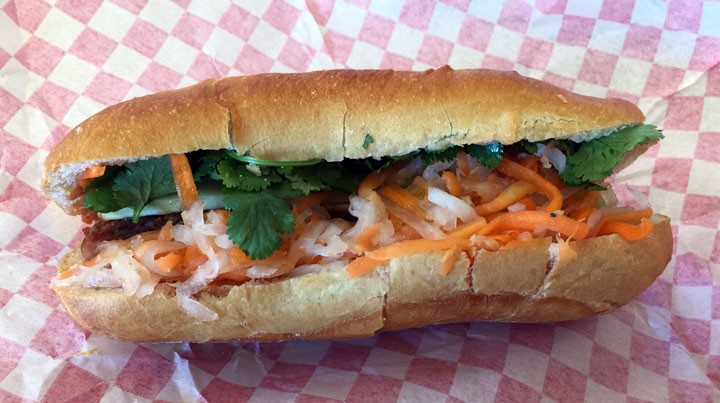 “I’m not allowed in the Vietnamese sandwich shop anymore.
They decided to banh mi for life.”

During an ice-breaker at what promised to be a stressful project planning meeting, all participants were asked to stand up and describe their favorite childhood Christmas gift. For the most part, favorite gifts conformed to gender stereotypes. Male colleagues waxed fondly about GI Joe action figures (don’t ever call them dolls), Star Wars Lego sets and their first bike. Females in our group described Barbie dolls, playhouses and cabbage patch kids. Then it was my turn. “My favorite Christmas gift as a child,” I explained “was a dictionary.” Copious groaning ensued though for some reason no one was surprised. As a child for whom English was a second language, my first dictionary was a good friend, one consulted frequently when reading my other favorite tome, the encyclopedia. Yeah, I was a weird kid.

Perhaps because it was so ponderous and not a few gazillion bytes of information floating around some ethereal concept called the cloud, the dictionary was much more uncool back then. It was also much more mysterious and stodgy. No one seemed to know how new words were added from year-to-year (I pictured a pantheon of robed academics assiduously considering all prospects). Today, we know that new words are added to dictionaries when they’re used often enough that they can be said to “belong”—they’ve become part of the mainstream vernacular. One particularly rich source of new words is the culinary world. In 2014, for example, the Vietnamese term “banh mi” was one of 500 new words added to the American Heritage Dictionary.

If you’re wondering why it took such a long time, consider that the popularity of banh mi has largely been an urban phenomenon. You could, in fact, say the same thing about Vietnamese cuisine in general. Travel around the Land of Enchantment and you’re not likely to find authentic banh mi in Farmington, Gallup, Roswell, Silver CIty or Taos—and they’re among the state’s most populous or urbane cities. No, my friends, for the most part if you want banh mi, you’ll have to trek to the Duke City, Las Cruces or Santa Fe. Though banh mi may have become part of the American lexicon, it’s still largely a strange word to many New Mexicans. Give it a decade or so and that shouldn’t be the case. Banh mi is too good not to be enjoyed by everyone!

We’ve been loving banh mi in Albuquerque since at least 1995 when they were called “Vietnamese Sandwiches” by the few Vietnamese restaurants (May Hong among them) which served them. That’s nineteen years before banh mi made it to the American Heritage dictionary. Albuquerque’s very first Vietnamese bakery whose primary focus was banh mi was Banh Mi Coda which opened in 2010 after a short stint as Lee’s Bakery. In its annual Food & Wine issue for 2012, Albuquerque The Magazine named the banh mi at Banh Mi Coda as “one of the city’s “12 yummiest sandwiches.” In early 2013, the Duke City saw the launch of its second banh mi shop when Sai Gon Sandwich opened in Franklin Plaza, a timeworn shopping center made infamous on Better Call Saul. Ten different banh mi adorn the menu at this combination bakery, deli and tofu house.

In November, 2016, SweeTea Bakery Café opened its doors in the Montgomery Plaza shopping center, gracing the Duke City with yet another very impressive array of delicious banh mi as well as some of the best pastries this side of Paris. Not quite a year later, Rolls & Bowls became the fourth Vietnamese bakery-restaurant specializing in banh mi to launch in Albuquerque. One commonality among this quadrumvirate of banh mi purveyors is some of the city’s very best sandwiches prepared and served by very talented and dedicated owners all committed to proving (to paraphrase the Beatles) you can banh mi love. You may have noticed there remain under-served and even unserved portions of the Duke City in which nary a banh mi can be found. One of those is the burgeoning westside.

On 28 December 2017, westside Vietnamese food aficionados had their prayers answered with the launch of Leona Bahn Mi. Located in a small, nondescript shopping center, Leona may be the smallest tenant in the area with two four-tops (table seating four diners) and seating for two on a small counter space. This bodes mostly take-out business–or diners arriving early so as to secure a seat. You’ll want to do the latter to interact with the very friendly and accommodating owners. There actually isn’t anyone named Leona at the restaurant. Leona is a portmanteau for the delightful married couple who own the restaurant: Leo, who runs the front of the house and Hanh who runs the kitchen. You’ll meet them both.

Leona Banh Mi is aptly named, but banh mi aren’t the sole items on the menu. Belying the Lilliputian space, you’ll also find seven pho dishes, four different spring rolls and Vietnamese coffee. Lots of coffee. Vietnamese smoothies are at the ready though not one made with durian. Nine distinct banh mi grace the menu including one (sardines and tomato sauce) your intrepid blogger has yet to try anywhere. Banh mi are available in six- or twelve-inch sizes. All banh mi include pickled carrots, daikon, cilantro and jalapeños or green chile if you request them. Instead of your banh mi being constructed on the usual Vietnamese-style baguette, you can ask for a lettuce wrap-style banh mi.

Spring rolls, two per order rice wrappers encasing cilantro and lettuce along with your ingredients of choice: shrimp, shrimp and pork, tofu or vegan are the only “appetizers” on the menu–or you can enjoy a six-inch banh mi with a bowl of pho if you prefer. Don’t pass up the spring rolls. They’re about five-inches long and are served with Leona’s homemade peanut sauce or fish sauce. The shrimp and pork spring rolls are terrific–fun, fresh and delicious. The shrimp has the crisp snap of freshness while the pork is imbued with inimitable Vietnamese grilled pork flavors. The peanut sauce is a bit on the sweet side, but a bit of chili sauce will quickly fix that.

After years of being disappointed by so-called Italian meatball subs, my affections have turned to the Vietnamese meatball banh mi. My disappointment has been abated every time. There’s just something magical about the moist pork meatballs interplaying with the crunchy carrot-daikon-cilantro-jalapeño slaw that appeals to my taste buds. As with all banh mi, the secret to this sandwich is the balance between meatballs, slaw and sauce. It’s not drenched in sauce nor is it desiccated. Banh mi are not intended to be behemoth “Dagwood” sandwiches crammed with meats and cheeses. You can actually taste, discern and appreciate every single component of every banh mi.

One of the most unique banh mi I’ve ever encountered is Leona’s fish roll banh mi. My expectations were for some type of fried fish looking like most fried fish look. Instead, the fish more closely resembles sliced deli turkey about a quarter-inch thick. Thankfully it doesn’t take like turkey. Despite its rather unique appearance, it does taste like fish, albeit strangely presented fish. Hahn explained that the fish is filleted and pressed then fried. Whatever the process, it’s a good (though not even very good) banh mi. Flavors didn’t pop as they do with the meatball banh mi.

Residents of the West Mesa no longer have to trek across the river or to Rio Rancho to get their banh mi fix. Now if we could only persuade Leona to expand to other unserved and under-served hamlets across the Land of Enchantment, the dictionary entry for “banh mi” will be instantly recognizable to one and all.