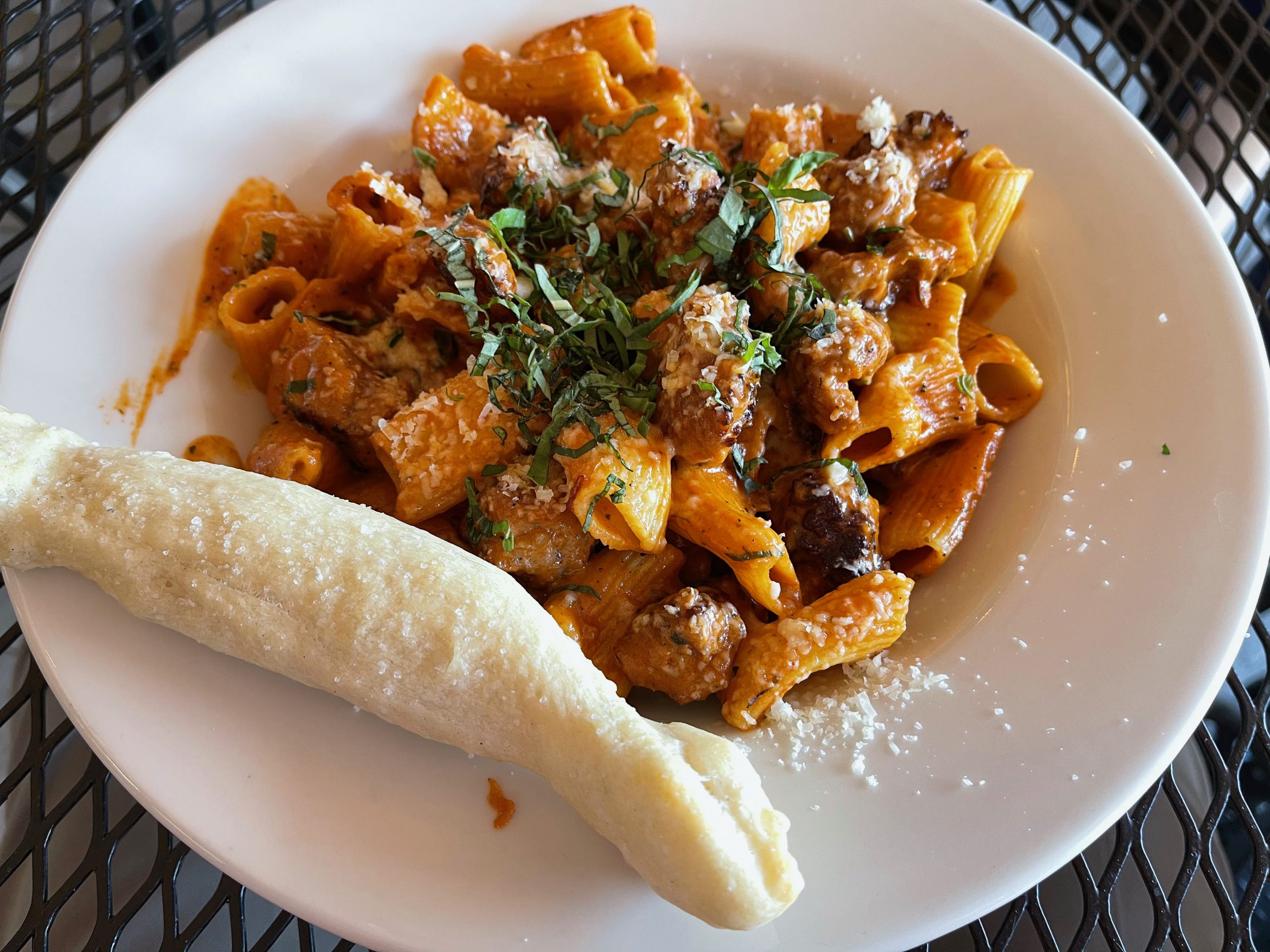 What does it say about a restaurant when it runs out of food?  Nine times out of ten, you’d probably say it’s either brand new and doesn’t yet have a feel for its traffic volume or their inventory management just isn’t very good.  Our inaugural visit to Rustico Italian Kitchen on a bright Sunday morning introduced us to another reason.  The restaurant was so busy the previous night that diners polished off everything on the menu save for pizza and salad.  For denizens of Albuquerque’s far northeast heights, that’s actually reason for celebration.  It means outstanding Italian food has finally made a triumphant return to this quadrant of the city.

Not that many years ago, I lamented that with the exception of Paisano’s Italian Restaurant on Eubank and Joe’s Pasta House in Rio Rancho, there was a dearth of great Italian restaurants in the Duke City area. Then came Torinos at Home followed not long thereafter by the M’Tucci’s Italian restaurant dynasty.  Today Duke City area diners who want to mangia bene have a wealth of options.  In March, 2021, Rustico Italian Kitchen entered the fray.  With a dynamic chef at the helm, Rustico began generating enthusiasm even before it launched.

At the helm is Chef Mike White, the New Mexico Restaurant Association Chef of the Year for 2018, an uber-talented chef and restaurant impressario with more than twenty years experience in New Mexico restaurants.  We first became acquainted with Chef White’s culinary prowess when he launched The Point Grill in Rio Rancho’s far-out (in every way) Point Grill.  Ensconced in the Mariposa master-planned community, the Point Grill introduced a largesse of flavors in a Liliputian 1,200 square-foot space.  In 2016, Chef White earned the “People’s Choice” award at the 6th annual Taste of Rio Rancho.

In 2018 Chef White relocated his restaurant to a much larger space in much closer proximity to a larger population, ostensibly because his unique ability to coax  flavors, moments and experiences from his guests couldn’t be contained within such a small space   .He christened his reborn restaurant The High Point Grill and quickly began earning honors and accolades a plenty.  One connotation of the new name is that a visit to the restaurant should be the “high point” of your week or your day.

During the height of the pandemic in 2020, Chef White announced he would be launching a scratch cooking Italian restaurant within the Promenade Shopping Center in a space formerly occupied by the Barley Room.  “It’s comfort food with a chef’s twist on it,” the Chef told the Albuquerque Journal about his largest restaurant endeavor as an owner.  Before he could launch Rustico, he also acquired Bacon Jam, an American comfort food restaurant showcasing breakfast and lunch favorites, many of which incorporate bacon.

No sooner had Rustico opened its doors in March, 2021 than my friend Ryan “Break The Chain” Scott began a one-man campaign to have me join him for lunch at his favorite new Italian restaurant.  He raved about the “best I’ve ever had” tomato bisque and proclaimed greatness for Rustico.  After our inaugural visit–when Rustico had run out of that acclaimed tomato bisque–we laid blame squarely on Ryan for having consumed all the restaurant’s food during his visit one day prior to ours.  I swore right then and there never to forgive him for that!

Our inaugural visit was on a Dr. Jeckyll day in New Mexico when the Land of Enchantment’s usual ill-tempered Mr. Hyde winds were surprisingly sedate.  We found a nice shady spot in the expansive patio and took in the sights and sounds of the Promenade Shopping Center.  Rivulets of water cascading down a water feature provided a tranquil background as we perused the menu.  Though we knew Ryan had polished off everything but the pizza and salad, we enjoyed studying the entire menu which is laid out in several sections: pasta, salad, entrees, appetizers, charcuterie and pizza.  Future visits would be imminent.

In a podcast interview with the wonderful Carol Wight, CEO of the New Mexico Restaurant Association, Chef White explained Rustico would feature fresh pasta made in the dining room and fresh mozzarella pulled in front of the diners.  He raved about a 10,000-pound stone and cast oven in the kitchen and the restaurant’s enviable chef-inspired gourmet-style pizza.  His own favorite combination of gourmet pizza ingredients are smoked salmon, Gruyere cheese, capers and red onions.  The pizza menu has other fun combinations pizza aficionados are sure to enjoy.

One of Chef White’s ambitions is for Rustico to become an industry hang-out.  He would love for people in the hospitality industry to visit Rustico for a snack, cocktail or just to hang out with other bartenders, chefs, distributors and others who keep Albuquerque (and Ryan) well fed.  To that end, he’s started “industry night” on Mondays, giving industry workers ten-percent off their bar tab.  As he’s done with the High Point Grill, he plans to host events and culinary competitions at Rustico.  Weather permitting, he’ll take full advantage of the expansive patio, some of which is hard-covered by the building.  The extended patio is an excellent venue for gazing at celestial bodies, some of them in the sky.

28 March 2021: As we cursed Ryan again for having eaten everything but the pizza and salad, we determined to enjoy our meal nonetheless.  Besides, Chef White probably couldn’t prepare a bad meal if he tried to.  Our inaugural dish–panzanella rustico (heirloom tomatoes, red onion, cucumber, marinated croutons, pickled cauliflower with an herbed oil) was no pork belly carbonara (on the pasta menu (blast you, Ryan), but it was an exemplar of freshness and flavor.  You can’t go wrong with this classic Tuscan rustic salad.

28 March 2021:  There are eight pizzas on the menu in addition to a “your pie, your way” option that lets you stretch the boundaries of your creativity.  Not all of us are as creative as Chef White which is why we ordered the Balsamic and Brie (marsala candied onions, brie, reduced balsamic, fresh bosc pear and prosciutto).  Our server raved about the “bosque” pears which she assumed were grown along the Rio Grande.  We didn’t have the heart to correct her.  Bosc pears are known for their “complex flavor, honey-sweetness, and juiciness.”  They are a perfect foil for the sweet-fruity-tart flavors of the balsamic with the salty prosciutto lending a pleasing contrast in flavors.  The 10,000-pound stone and cast oven certainly does its job well even when my Kim asked for a light char.  The crust is redolent of fresh-baked bread and delicious.

28 March 2021:  Thankfully Ryan didn’t finish all the desserts.  We got the very last one, a deconstructed pear cheesecake.  This is cheesecake the way it would be baked by artists who don’t believe in coloring between the lines or using real-life colors.  It’s strewn on the plate in a splattered manner that somehow still manages to be congruent.  Moreover this Jackson Pollock painting on a plate was delicious, one of the better cheesecakes we’ve had in a while.  A wide smear of caramel on the plate went well with every other ingredient.  Try to get a little of everything in every spoonful to get the full effect.

3 April 2021: Because Ryan hadn’t visited the day before our second trip to Rustico, the full menu was available to us.  That included all five charcuterie boards.  While every board was a sultry temptress, board #4 (fresh pear, balsamic and cippolini cheese enrobed in balsamic vinegar with a hint of cippolini onions), finocchiona (a fennel rich salami), marcona almonds and marinated olives) called loudest.  It’s a pulchritudinous plate, but while we’re alliterating, it was also a bit paltry.  Every item on the board was complementary to every other item.  Every flavor meshed wonderfully.  There just wasn’t enough on the board for both of us.

3 April 2021: After my first spoonful of the tomato bisque, forgiving Ryan was inevitable.  After all, anticipation makes the heart grow fonder and maybe makes the soup taste even better.  My chain-breaking friend knows soup.  As it was for him, this may be the best tomato bisque we’ve ever had, a wondrous elixir composed of sweet San Marzano tomatoes, fresh basil greens, Parmigiana and croutons.  This soup hits all the right notes.  It’s served hot with sumptuous steam wafting upwards to tease your waiting nostrils.  Every bite brought us joy until only the last few remained.  Then we began a slow, mournful vigil until the last drop had been sopped up by the garlic flecked crouton.

3 April 2021: The genesis of rigatoni (or usually penne) alla vodka has long been in dispute with only a few sources attributing its origin to Italy (where wine is often added to tomato sauce, but vodka–never).  Most seem to believe it’s of Italian-American origin.  What isn’t in dispute is that rigatoni alla vodka (ground Italian sausage cooked in a vodka marinara, finished with cream served with fresh-made rigatoni) is a terrific dish.  Rigatoni, a hearty past, is the perfect vehicle for the creamy, vibrant tomato an vodka-infused sauce seasoned with fresh herbs and Parmesan.  More than any pasta we’ve had in the metropolitan area, this rigatoni was al dente, the perfect combination of firm and tender.  This is an extraordinary version of one of our favorite pasta dishes.

3 April 2021: Despite a number of pasta options, my Kim was rapt with delight at her inaugural pizza from Rustico.  It would stand to reason therefore that another pizza would be just as delicious.  Ergo, the Pork Belly (herb-roasted pork belly, shallots, green onions, garlic and herb oil).  While quite good in its own right, it wasn’t quite as awe-inspiring as the Balsamic and brie.  Each cube of herb-roasted pork belly is a thick bite-sized slab of fat and pork though we found these cubes so rich as to be a challenge to eat.  Still, it’s pork belly, one of the essential food groups.

My friend Ryan Scott will forgive me for having a bit of fun at his expense…or he will if I buy him a vat of that irresistible tomato bisque and we wipe out the entire menu together.  Make sure you get to Rustico before we do or you just might find yourself facing a limited menu.