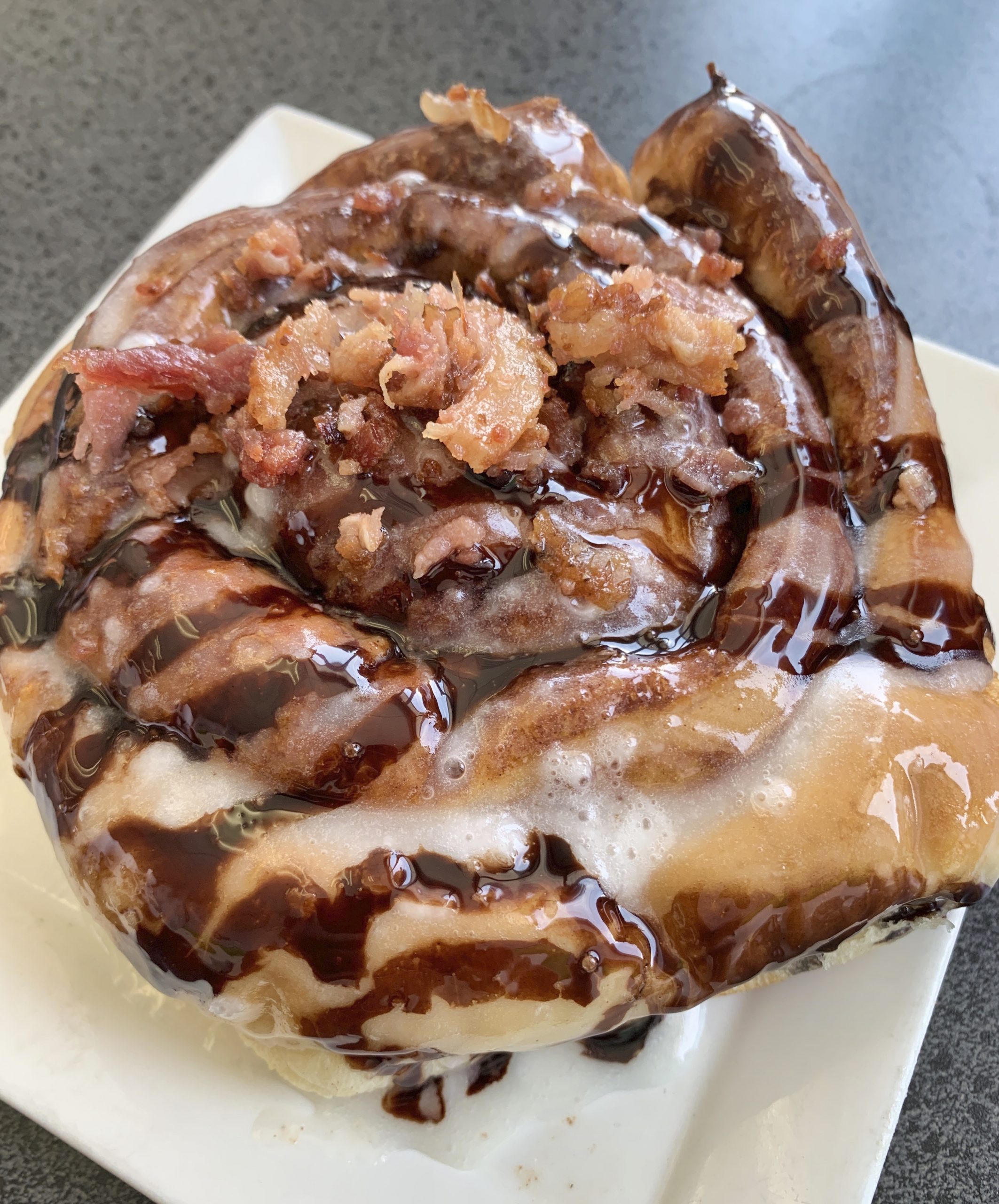 “I think we love bacon because it has all the qualities of an amazing sensory experience.
When we cook it, the sizzling sound is so appetizing, the aroma is maddening,
the crunch of the texture is so gratifying and the taste delivers every time.”
~Alex Guarnaschelli

NOTE: On July 31, 2020, the original Bacon Jam in Albuquerque closed its doors, but the Bacon Jam in Cedar Crest remains open.  While this review is based on visits to the Albuquerque location, I’m confident the Cedar Crest location will serve the same high quality food with the outstanding service we experienced every visit.

With all due respect to the Iron Chef, we love bacon because we’re genetically disposed to love bacon!  It’s in our DNA.  We’re hard-wired to love bacon!  In much the same way the brain releases endorphins when we enjoy intensely piquant New Mexico raised chile, bacon’s savory flavor elicits a highly addictive response on our neurochemicals.  In a 2009 article, journalist-editor Arun Gupta of The Indypendent newspaper in New York, revealed that while bacon has eighteen ingredients, six of them are a type of umami, a Japanese term loosely translated to “deliciousness.”  Foods with umami have a meaty, savory quality which renders them highly addictive.

At the risk of political incorrectness, we also love bacon because we got tired of being told how unhealthy it is.  All those incessant harangues about bacon’s 60-percent fat content drove the rebels among us to scarf down rashers of bacon, a protest of sorts.  Thanks to the anti-fat diet craze of the 1980s, bacon was priced ridiculously low.  That backlash response coincided with the advent of the Adkins diet frenzy and diners becoming increasingly weary of the flavorless, fat-free, calorically-deprived fake bacon shoved down our throats.  Enterprising restaurateurs caught wind of the increasing demand and haven’t looked back.

Those of us who can’t envision starting a day without bacon have our own version of the popular Six Degrees of Kevin Bacon  game sans the “Kevin” part.  In that version, the “bacon number” of an actor or actress is derived by the number of degrees of separation they have from actor Kevin Bacon.  Yawn!  In the Kevin-less version practiced by bacon aficionados, we attempt to find a food that wouldn’t be greatly improved by the simple addition of bacon.  Burgers?  You’ve got to be kidding.  Adding bacon to burgers is one of the greatest culinary inventions of the 20th century.  Hot dogs?  Ditto!  Pizza?  Ever heard of Canadian bacon, a staple on many great pies?  Tacos?  Yep, bacon elevates the most pedestrian of tacos.  Macaroni and cheese?  Bacon should be mandatory!  Pancakes?  Bacon is a natural foil for the oft-cloying syrup!  Hmm, maybe there’s nothing bacon can’t improve.

Some of you trying your hand at six degrees of bacon may have concluded I bet fudge wouldn’t be very good with a little bacon.  You would be wrong.  Noted gourmand and everyman philosopher Homer Simpson once noted “Mmmmm!  Move over, eggs.  Bacon just got a new best friend – fudge.”  You can’t argue with such an unimpeachable source.  The great folks who launched Bacon Jam in March, 2019 certainly wouldn’t.  Their all-day breakfast and lunch diner doesn’t yet have a dish that pairs bacon with fudge, but it’s probably just a matter of time.

True to its name, Bacon Jam is a celebration of bacon-infused decadence, offering bacon in forms that might lead vegetarians and vegans into temptation.  Bacon Jam thumbs its nose at all those health food obsessed one-percenters that would tell the rest of us we can’t enjoy the foods we love best.  You’ll do a double-, maybe triple-take at some of the bacon blessed, calorically-endowed decadence on the menu.  If you love bacon for breakfast, you’ll be thrilled to find bacon batter pancakes, maple bacon fried French toast, bacon and waffles, bacon omelets, biscuits and eggs and a fatty phalanx of bacon-bearing bounty.

The lunch menu is just as decadent, starting with an appetizer called “The Defibrillator,” two pieces of bacon rolled in a bacon batter and deep-fried.  If that’s not enough bacon for you, ask for bacon jam gravy on the side.  Other bacon dishes on the lunch menu include a Double BLT, triple cheese and bacon grilled cheese and a bacon chili (SIC) cheeseburger.  For those of you less inclined to have fun, Bacon Jam offers a “build your own salad” option that starts with a bed of lettuce, tomato and onion and a wealth of optional toppings such as bacon, ham, pastrami, roast beef and several cheeses.

5 April 2019: It probably won’t surprise you to learn that what brought my friend Bruce “Sr Plata” Silver and I to Bacon Jam is a chicken fried steak plate called “The Widow Maker.” For a pauper’s price of a buck south of ten dollars, the Widow maker includes a chicken fried steak, two eggs prepared any way you want them, papas and two silver dollar pancakes.  If you’re wondering where the bacon is, it’s on the gravy, a rich pepper gravy with lots of bacon crumbles on top.  This dish is not for the faint of heart–literally.  The hefty chicken fried steak is tender, well-seasoned and delicious, elevated to sheer pleasurable decadence by gravy which should come with an angioplasty on the side.

5 April 2019: It takes a very strong, very resolute, iron-clad man to resist the lure of bacon.  I know of only one person with convictions that implacable–Sr. Plata.  Of course, it helps that he’s able to enjoy his beloved chicken fried steak with red and green chile.  Even without the magical properties of bacon, both the red and green chile are terrific, imbued with the qualities all New Mexicans value: great flavor and a nice piquancy.  The green chile, in particular, bites back.  Sr. Plata loves pancakes nearly as much as he loves chicken fried steak.  It almost pained us that the silver dollar pancakes weren’t full-sized, but neither of us really wants to make widows of our brides.

It didn’t take much effort by the lovely Taylor to convince me to add bacon to my green chile cheeseburger (one-third pound. ground beef patty, onion, lettuce, tomato, American cheese and green chile).  She also convinced me (without much effort) to choose onion scoops instead of fries or garden salad with the burger.  Onion scoops (bite-sized petals of sweet onion covered in a light batter) may not be as big as onion rings, but they seem to have more sweet fried onion flavor than their circular counterparts.  They’re also served with a pleasantly piquant jalapeño ranch dressing, though rather than scoop up the dressing, you’ll probably dip the scoops into it.  Three strips of bacon infuse the burger with a smoky, salty, sweet, mellifluous concert in your mouth.  It’s a perfect foil for an autumn blend combination of roasted red (sweet and fruity) and green chile.  Though the burger has a nice char, inside it was prepared to my exacting degree of doneness: medium-rare.  Mustard, ketchup and mayo were certainly not needed.  This is a terrific burger…and those onion scoops are a revelation.

13 June 2020: On March 8, 2003 in celebration of its one-hundred year anniversary, the city of Mexicali, Mexico made a grilled steak taco that weighed 1,654 pounds and was more than 35 feet long and 33.8 inches wide.  The flour tortilla-based taco was constructed with 1,182.5 pounds of grilled steak, 186 pounds of dough, 179 pounds of onion and 106.3 pounds of coriander. Eight grills were used to cook the meat and a staff of approximately 80 people were involved in the entire process which lasted about six hours. It goes without saying that this behemoth is the title-holder of world’s largest flour taco according to the Guinness Book of World Records.

As is oft said, size is relative.  So, you’ll forgive me if I’m still impressed by Bacon Jam’s giant taco (foot-long taco shell filled with crispy fries, smothered with red or green chile, Cheddar cheese, house made chicken tenders, topped with lettuce, tomato, jalapeno ranch, bacon crumble and a side of green salsa). It’s not every day you find a taco this large.  It’s easily the size of a half-dozen standard tacos or a baker’s dozen mini tacos.  The taco shell is made from a deep-fried flour tortilla, but there’s no way you can pick this taco up as you would a conventional taco.  The shell would crumble and an avalanche of ingredients would spill out.  As such, you’ll find yourself eating it as you would a taco salad.  There’s a lot to like about this taco, our favorite elements actually being the crispy fries, jalapeno ranch and bacon crumble.  Not many of us can finish this taco, but you’ll enjoy trying.

13 June 2020: After consuming Mexicali’s titanic taco, you’d probably want dessert.  What could possibly have been more fitting than the Guinness Worlds Record largest cinnamon roll?  This massive galaxy-shaped circular coil comes from Wolferman’s Bakery in Kansas City and weighs in a whopping 1,149.7 pounds (more than an adult moose) and was constructed from 697 pounds of flour, 378 pounds of cinnamon sugar filling and 55 pounds of butter.

In comparison, the cinnamon roll at Bacon Jam is tiny (again, size is relative).  Variations of America’s favorite breakfast pastry served at other restaurants often include several nuts, raisins, streusel, and even fruit.   You can have all those additives.  We’ll take bacon crumbles, a pile of them at the very center of the cinnamon roll.  That’s how Bacon Jam does it.  Chocolate is drizzled atop the sweet, decadent icing for a doubly calorific treat.  Trust me, you’ll appreciate the bacon, a perfect foil for the sweet, buttery roll.

Bacon Jam is located in the space which previously housed Mick’s Chile Fix.  It’s everything you look for in an independent mom-and-pop restaurant (unless you’re into more healthy dietary pursuits).  The proprietors are friendly, accommodating and eager to please.  For denizens of the east side of the Sandias, a second location of Bacon Jam is now open in Edgewood (150 Highway 34–the Southeast corner of 344 and Dinkle Road).