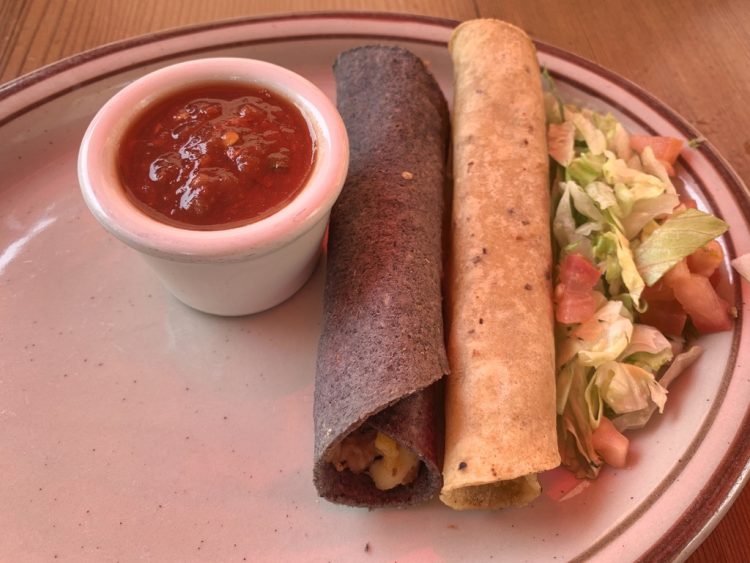 “I have tried to express the terrible passions of humanity by means of red and green.”
~ Vincent Van Gogh

Using bold and furious brushstrokes and striking colors (mostly red and green), Van Gogh once created a painting intended to depict humanity at its lowest point. Calling it “Night Cafe” he described it as “…one of the ugliest I have ever done, a collection of clashing colors in the dreariest atmosphere.” To New Mexicans, the notion of red and green being ugly, dreary and clashing in any way is a heretical concept. For denizens of the Land of Enchantment, red and green are absolutely stunning especially when plated together over blue corn enchiladas stuffed with carne adovada. Red and green chile are why New Mexicans celebrate “Christmas” every day of the year.

Unlike the dreary and ugly cafe of Van Gogh’s painting, New Mexico’s restaurants tend to be spectacular, especially when their ambiance is perfumed by the wondrous wafting of chile simmering over a stove. This rapturous redolence is the essence of enchantment, a veritable aphrodisiac to chile lovers everywhere. Very few restaurants prepare red and green chile as well as Santa Fe’s La Choza, an inviting domicile of deliciousness near the intersection of St. Francis Drive and Cerrillos Road, the city’s two most well-traveled thoroughfares.

La Choza is housed in the adobe edifice that was the home and bunkhouse for the Mercer Ranch, a turn-of-the-century (19th) home. Translated from Spanish, La Choza means “the shed” and that’s not a coincidence since it is the sister restaurant of The Shed, one of Santa Fe’s most popular and highly regarded dining establishments of any genre. Similar to its elder sibling, La Choza celebrates New Mexico’s culinary heritage with some of the very best homestyle cooking you’ll find anywhere in the state. It has specialized in the cuisine of northern New Mexico since 1984.

As with its sibling, you may have to wait a while to be escorted to a free table. Patio dining in the summer and dining by the aromatic fire of a wood-burning stove in the winter make it an every season favorite. Also like The Shed, La Choza has enjoyed the national television spotlight. In May, 2014, the Travel Channel’s “Chow Masters” program aired an episode entitled “Santa Fe Burritos” in which three purveyors of bounteous burritos were pitted in a piquant melee: La Choza and Dr. Field Goods Kitchen in Santa Fe and Hurricane’s Cafe in Albuquerque. Judging was based on creativity and flavor. The ten thousand dollar burrito winner was Dr. Field Goods who wowed the judges with a smoked goat chimichanga in mole. Many locals would argue that La Choza’s offering, its famous chile relleno burrito, should at least have garnered a tie.

Undoubtedly by design, La Choza has much to look at while you wait for your order to be filled though it’s hard to pry your eyes off the menu where temptation awaits. The ambiance isn’t what might be characterized as stereotypical New Mexican. In fact, you’d have to call it a “fusion” of cultures, mostly Latino though my Swedish bride swears some of the decorative flower paintings came from her ancestral homeland. You might also see what may well be Peruvian and Mexican influenced artwork and swaths of fabric hanging from the ceiling that look as if they came right out of Saudi Arabia. It’s an interesting montage.

There’s no mistaking the menu for anything but New Mexican cuisine though some items are non-traditional (such as green chile clam chowder and fresh mushroom soup). Portions are generous, but no so large that you can’t have salsa and chips and a dessert, too. La Choza’s menu is close to identical to The Shed’s, even following a long-time Shed tradition of serving a thick slice of French bread with entrees (you can opt for a sopaipilla or tortilla instead). Most entrees also include beans and (or) posole, both of which are cooked with pork unless otherwise requested.

The salsa and chips are outstanding. The salsa features lush red tomatoes redolent with pungent green chile and a liberal application of cilantro. It has a slightly sweet aftertaste. You’ll run out of salsa before you run out of the warm blue and yellow corn tortilla chips. The chips are relatively thin, but are unfailingly crisp, low in salt and are formidable enough to scoop up Gil-sized portions of salsa.  As great as the salsa is, don’t limit yourself to just salsa.  Order the trio: salsa, guacamole and chile con queso.  All three are exemplars of New Mexico’s favorite appetizers.

The red chile at the Santa Fe restaurants is brick red and deeply earthy with a slightly sweet taste you remember long after your meal–so good you might never order the restaurant’s green chile (which would be a mistake because the green chile is outstanding in its own right as you’ll quickly find out should you order the frijoles con chile verde). Still, the red chile is the quintessential New Mexico chile–the result of the ownership purchasing the entire chile bounty of two Hatch, New Mexico chile fields. Red chile is ground every day in the restaurant’s mills to prevent oxidization and ensure freshness.

Served atop stuffed sopaipillas, generous coverage of red chile overflows onto the Spanish rice and refried beans and for that you’ll be grateful. Honestly, only at Mary & Tito’s will you find a chile anywhere quite as wonderful. The stuffed sopaipilla is engorged with pinto beans and your choice of spicy ground beef or chicken, both of which are terrific. The refried beans are among the very best you’ll find anywhere in New Mexico, so good they’ll convert you even if you disdain beans.

25 May 2015: The carne adovada burrito is fork tender with a profundity of earthiness permeating each wonderful shard of each tender tendril of porcine perfection bathed in red chile. Red cubes are marinated in La Choza’s unique blend of red chile pods and seasoned with just a tad of garlic and oregano. If you’d prefer to have your adovada sans burrito, the carne adovada plate is your hook-up. My Kim rates La Choza’s carne adovada alongside her favorites at Mary & Tito’s and Perea’s Tijuana Bar & Restaurant.

19 June 2020: In 2007, Science Daily revealed that blue corn tortillas are healthier than their white counterparts, especially for dieters and diabetics. Scientists discovered that blue corn tortillas had less starch and a lower glycemic index than white tortillas. New Mexicans probably don’t think about this as they’re enjoying the sweeter, nuttier flavor of beautiful blue tortillas, especially when those tortillas serve as a canvas for enchiladas topped by red and green chile and an egg fried over easy. As with all entrees at La Choza, the blue corn enchiladas are served hot, almost steaming. It’s a nice touch.

19 June 2020: La Choza’s dessert menu–and you’ve got to order dessert even after you consume sopaipillas with real honey–doesn’t include some favorites from The Shed. Absent from the menu is the lemon soufflé which Food Network celebrity Rachael Ray called “divine and delicate.” Rather than bemoaning what is left off the dessert menu, celebrate the wonderful options remaining–such as homemade French apple pie topped with a profusion of chopped walnuts, cheesecake (a creamy filling on Zwieback crust with a sour cream vanilla topping), hot fudge sundae (yum, dark chocolate on rich vanilla ice cream), red raspberry sundae (fresh frozen raspberries on rich vanilla ice cream) and perhaps the best of all, the Mocha Cake.

The Mocha Cake is something special. It’s a blend of coffee and dark chocolate mousse frozen cake topped with fresh whipped cream. It’s only semi-sweet and not quite big enough to share, but it is absolutely luscious, easily among the very best desserts in Santa Fe. Alas, it’s so good, I’ve ordered it every single visit to La Choza and to The Shed so my experience with some of the other desserts is solely hearsay.

While perhaps not as celebrated as The Shed (which is situated in the touristy downtown area), La Choza is equal to, if not better than its sibling. It’s wholly unpretentious and caters more to locals. Best of all, it’s on the right side of the tracks no matter what side it’s on.