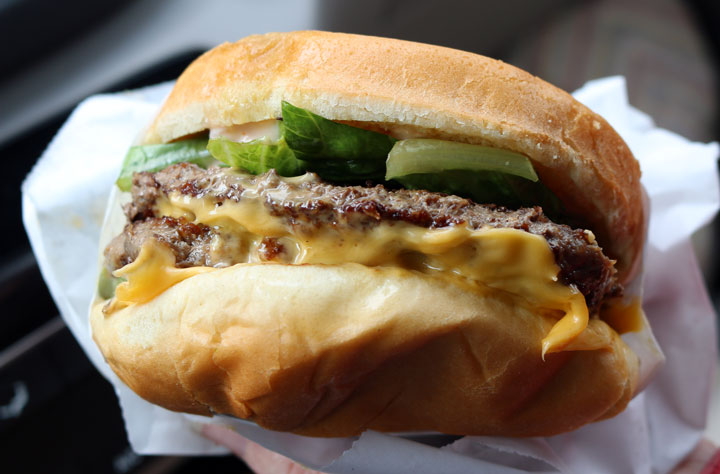 “Yeah, but you sure don’t have hurricanes in New Mexico.” I argued that the Land of Enchantment has proudly boasted of hurricanes for decades, adding that New Mexico’s hurricanes even had masculine names long before hurricanes on the Gulf and East Coasts did. “What names?” he asked? In as straight-face as I could muster, I recounted the names Al and Al, Jr., as in New Mexico music legend Al Hurricane and his son Al, Jr. Okay, that’s just me being a smart Alec, but Al and Al, Jr. are about the closest a hurricane will ever get to New Mexico though the rainfall and resultant flooding of some tropically-spawned hurricanes have wreaked havoc on our enchanted state.

Hurricane’s Cafe and Drive-In has nothing to do with the godfather of New Mexico music. Nor, I’ve been told, is the restaurant named for the tropical cyclones that can bring torrential downpours, fierce winds and damaging tornadoes. Hurricane’s Café and Drive-In was launched in 1987, the brainchild of Greg Desmarais and Gary Hines. When Hurricane’s expanded to eight restaurants, Desmarais and Hines parted ways. In 1997, Hines partnered with Ray Ubieta on a concept they named Twisters. While Twisters has expanded to some nineteen restaurants, including four in Colorado, only the original Hurricane’s remains. Still, in 2010, Desmarais was named the New Mexico Restaurant Association’s “Restaurateur of the Year” in recognition of his dedication to the community, for the hundreds of jobs he’s provided and for his active involvement in the restaurant industry.

Hurricane’s is situated on Lomas in a ‘50s style drive-in reminiscent of those depicted on American Graffiti and Happy Days. The restaurant got its start as Frank’s Drive-In, a popular cruising spot for high school students in the 60’s. Frank’s was renowned for its taco burgers, tater dogs, and fresh limeades, items which are now available on Hurricane’s expansive menu. Hurricane’s retained much of the motif which made Frank’s a Mother Road era classic. Covered parking stalls equipped with menu boards and intercoms are evocative of the car culture of the 50s and 60s though during every one of our visits, we didn’t espy a single person sitting in their cars awaiting their burger or burrito bounty. Perhaps the technology of yesteryear confuses diners or more likely, today’s social media connected restaurant-goers prefer to dine with others.

As might be expected, Hurricane’s ambiance also brings to mind a bygone era replete with black and white checkerboard tile floors, old-fashioned louver blinds, red vinyl padded booths and a counter where you place your order. To protect the checkerboard tile floor, chair feet are padded with tennis balls. Tables and chairs fastened to the concrete are available beneath the covered patio for al fresco dining weather-permitting (though as previously mentioned, it’s amazing how many diners choose to eat indoors even in good weather and how many of them the smallish dining room will accommodate.

The two menu items for which the restaurant is best known are the “disaster burrito” and the Cyclone, Hurricane’s version of the green chile cheeseburger. Contrary to my friend Jessie’s assertion, the disaster burrito wasn’t named because of New Mexicans’ fascination for natural disasters. Many years ago, a food critic (not me) declared Hurricane’s foods a disaster. Desmarais’ good-natured response was “let’s show them a disaster.” The disaster burrito–a beef, egg and bean burrito smothered with pan-fried potatoes, red and green chile and topped with lettuce and tomatoes—is available in 1/8th, 1/4th, ½ and whole burrito sizes.

The disaster burrito made its national television debut in May, 2014 in a Travel Channel program called “Chow Masters.” In an episode entitled “Santa Fe Burritos,” three purveyors of bounteous burritos were pitted in a piquant melee: La Choza and Dr. Field Goods Kitchen in Santa Fe and Hurricane’s Cafe in Albuquerque (a suburb of Santa Fe?). Judging was based on creativity and flavor. The ten thousand dollar burrito winner was Dr. Field Goods who wowed the judges with a smoked goat chimichanga burrito in mole. Many locals would argue that the disaster burrito should at least have garnered a tie.

1 April 2017: Not counting the taco burger, Hurricane’s menu offers five burgers. The Cyclone, a New Mexico green chile cheeseburger (lettuce, tomato, pickles) is a very popular option. Hungry diners will ask for their Cyclone “Earthquake burger” style meaning double meat and double cheese. The cheese melts like a molten blanket over the beef patties. If you like your green chile to bite you back, this isn’t the green chile cheeseburger for you. The chile has about as much piquancy as a bell pepper though it does have a nice flavor. Burgers and sandwiches are served with your choice of French fries, tater gems, coleslaw, cottage cheese or fruit cocktail. For a pittance you can upgrade to onion rings, fried zucchini or a salad.

1 April 2017: If your preference is sandwiches (and burgers are NOT sandwiches), Hurricane’s offers ten choices. My Kim’s favorite is the Patty Melt, a quarter-pound beef patty, cheese and grilled onions on light rye. She prefers it over the green chile cheeseburger and hasn’t bought into my suggestion that a patty melt would be even better with green chile. At any event, Hurricane’s version is quite good courtesy of a lightly toasted rye replete with plenty of rye grains. The grilled onions aren’t quite caramelized to a brownish hue, but retain a slight crispness. There’s plenty of melted cheese to bind all the sandwich elements into one cohesive whole.

1 April 2017: Fried stuff–onion rings, tater gems and fried zucchini–are a cut above what you find at most burger emporiums. The fried zucchini resembles the fried mozzarella you might find at an Italian restaurant, but bite into any of these golden hued little logs and the inimitable flavor of zucchini greets you. The fried zucchini is served with a ranch dressing though it’s not absolutely necessary. The biggest difference between tater tots and tater gems seems to be shape and size. Tater gems are larger and more “roundish.”

11 September 2019:  On the aptly named “New Mexican Favorites” section of the menu, you’ll find yourself challenged to decide which of the six items to order.  One choice which pleases every single time is enchiladas which are available with your choice of chicken, beef, cheese, carne asada or carne adovada with red and (or) green chile.  That type of variety is one of the reasons the Hurricane’s parking lot is usually packed.  It’s pretty rare for chicken to be my preferred option as too many restaurants seem to think chicken should have the texture of carne seca.  Hurricane’s chicken is moist and juicy, almost as if it was stewed.  Neither the red or green chile will make your eyes tear up with their piquancy, but they have a nice flavor.

Serving Albuquerque for more than three decades now, Hurricane’s Restaurant & Drive-In shows no surcease in popularity. Visit almost any time of day on any day in which it’s open and you’ll be among like-minded devotees of this very popular drive-in.