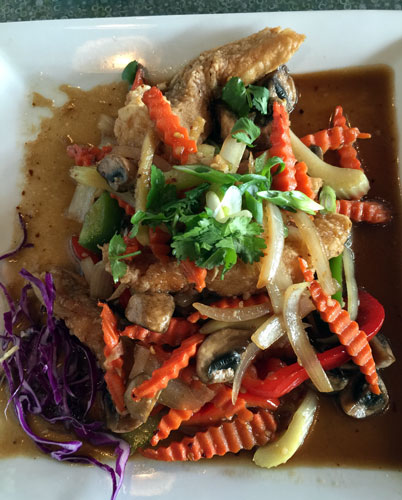 “Thai food ain’t about simplicity.
It’s about the juggling of disparate elements to create a harmonious finish.
Like a complex musical chord it’s got to have a smooth surface
but it doesn’t matter what’s happening underneath.
Simplicity isn’t the dictum here, at all.
Some westerners think it’s a jumble of flavors,
but to a Thai what’s important, it’s the complexity they delight in.”
~Chef David Thompson

Complexity of flavors, disparate elements, a jumble of flavors…these are the expectations diners have come to expect from Thai restaurants. The underlying foundation of Thai cuisine, going back to Chinese influences as early as the 10th century, is to achieve a satisfying and exciting taste experience through the relationship between five fundamental tastes: sweet, salty, spicy, sour and bitter. Properly balancing these flavors is the true essence of Thai cooking. Overemphasizing any of these fundamental tastes, particularly “sweet” and a Thai restaurant risks its cuisine being labeled “Americanized.”

For a cuisine to be considered “Americanized” isn’t necessarily a bad thing. Generations of Americans have grown up enjoying American Chinese foods developed by Americans of Chinese descent. Such familiar offerings as chop suey, crab Rangoon, pepper steak, fried wontons, sesame chicken and even the ubiquitous fortune cookie are beloved by Americans, few of whom ever question their “authenticity.” Similarly, Americans have long embraced Italian-American cuisine, As with Chinese food, Italian American dishes such as garlic bread, shrimp scampi and even marinara sauce are based heavily on the culinary traditions of the mother land, but they were “invented” here.

So why shouldn’t Americans enjoy dishes that may not be perceived as “authentic” as those dishes are prepared in the “old country?” How many of us would even know how these foods are prepared in the old country? These are the questions I asked myself during my inaugural visit to Thai Spice. My focus was perhaps more on discerning the “balance of flavors” than it was in enjoying one of the dishes set forth before me. Did the fact that this offending dishes had–at least to my palate–overemphasized a fundamental taste, make it a bad dish or have I become an insufferable food snob?

These were matters I had to discuss with my good friend and like-minded food enthusiast Bill Resnik who joined me on my second visit one day later. Bill, too, had visited Thai Spice previously and like me, he thought the food was generally good, but overemphasized sweet at the expense of balance. Together we would determine if those previous visits were anomalies or if it even mattered. Besides, Bill reasoned, prik nam pla (a traditional Thai sauce made from chilis and fish sauce) can fix anything.

Looking around the restaurant, it certainly didn’t seem to matter to the throngs of diners seated and those queued up for a seat to become available. Thai Spice is evidently a very popular restaurant, a fact borne out not only by lunch crowds but by mostly fawning reviews on Yelp and Zomato. One Yelp commentator even indicated “the food here tastes just like it does over there (in Thailand). Further, the restaurant’s general manager told the Albuquerque Journal that “It’s called Thai Spice for a reason–it’s spicier than other Thai restaurants.” Bill and I can handle (and would welcome) a slight overemphasis on spiciness, but sweet we can’t abide.

Thai Spice opened its doors in May, 2015. It’s located in the Villa de Paseo retail center on the northwest intersection of Paseo Del Norte and Wyoming, occupying a space which previously housed a short-lived gyros restaurant. It’s a very attractive space appointed with decorative touches as well as wall-mounted flat screen televisions. Attractiveness applies even to the straws served with your beverage. Inserted into the mouth of the straw is a flower shaped from the top of the straw itself. Enterprising engineer that he is, my friend Bill spent ten minutes reverse-engineering that flower.

7 January 2016: As regular readers of this blog know, all of my very favorite Thai dishes are curry dishes. To say I love curry is an understatement. In fact, even my favorite meteorologist shares that name–as in KRQE’s pulchritudinous Kristen Currie who clears my bleary eyes every weekday morning. It pains me, therefore, that my introduction to Thai Spice was in the form of the most inordinately cloying curry. The Pra Ram, described on the menu as “simmered with red curry, spinach, peanuts and vegetables” is nearly dessert sweet, akin to a sweet peanut soup. Even the bitterness of the spinach didn’t put a dent on the sweetness and the vegetables promised on the menu description were nonexistent. Because my server didn’t ask about my preferred level of heat, I assumed the Pra Ram would have some level of piquancy. Sadly it did not. Worse, this dish could have formed the basis for a lasting opinion of this restaurant.

7 January 2016: Egg rolls are somewhat anomalous at Thai Spice. Most Thai egg rolls we’ve had at other Thai restaurants aren’t much thicker than a cigar. In appearance, these are similar to Chinese egg rolls–thick and plump. That’s where the similarity to Chinese egg rolls (which have become the most boring egg rolls among all Asian restaurants which serve them) ends. These golden hued beauties are engorged with silver noodles, ground pork and vegetables (mostly cabbage). You don’t have to charter an expedition to locate pork; it’s plentiful in each egg roll. They’re delicious and are served in quantities of four per order. The accompanying sauce is a fairly typical sweet plum sauce that lends little to the egg rolls.

8 January 2016: Even better than the egg rolls are the spring rolls. Served two per order, each is as thick as a missile and stuffed with rice noodles, shrimp or chicken, basil and vegetables. The vegetable to shrimp ratio skews heavily toward the vegetables, but it’s not something you’ll mind because the fresh basil’s invigorating presence seems to enliven all other components. The spring rolls are served with a cloying peanut sauce nearly as sweet as the Pra Ram. Fortunately, a condiment caddy on the table has a squeeze bottle of Sriracha sauce (like my friend Niko Harada, I like Sriracha on my Sriracha). Then there’s the prik nam pla with its lime and chili bursts of flavor. Both are highly preferable to the peanut sauce though if you don’t have an asbestos-lined-tongue, you’re advised to go easy.

8 January 2016: The Thai Spice salad menu lists eight different salads, ranging from the traditional larb to a seasonal mango salad. With both my visits transpiring in January, the mango salad wasn’t available, but it’s hard to call the shrimp salad a consolation prize. This salad is constructed with green onions, red onions, tomatoes, cucumbers, chili and cilantro on a bed of lettuce. An ingredient not listed is sugar yet it makes its presence felt (although not nearly to the degree it does on the Pra Ram). The ingredients on this salad are fresh, invigorating and complementary. Better still, the salad showcases the balance of flavors that is the hallmark of Thai cuisine.

8 January 2016: Four items, all fish-based, festoon the seafood menu. Each item seems to emphasize a different flavor profile. One fish dish is made with curry (with hopefully more balance than the Pra Ram) and another with a sweet and sour sauce. Bill’s choice was the hot and spicy fish filet which he requested be prepared “New Mexico hot” instead of “Thai hot.” This dish is sauteed with onions, basil, mushrooms, lime leaf, carrots and bell peppers in a piquant chili sauce. As is often the case in Thai restaurants, one highlight is the freshness and aesthetic presentation of the vegetables which are prepared a tad under al dente. Both vegetables and fish inherit the heat and flavor profile of the chili sauce without compromising their own inherent flavors. This is a very enjoyable dish!

8 January 2016: The spicy ginger fish (fried fish sauteed with onions, ginger, mushrooms, bell peppers and carrots in a spicy chili sauce) has a rather similar flavor profile and balance of flavors, the differentiating element being ginger. The coupling of spicy chile sauce and fresh ginger is one of life’s most delicious combinations and because of that pairing, this dish shines. The fish are light and flaky though just slightly elastic, generally a sign it’s been slightly overcooked. Still, this is a dish we’d order again…and again.

In retrospect, had I not visited Thai Spice a second time my judgement would have been too rash and limited on too small a sample size. Only one dish out of the six sampled lacked balance and overemphasized one flavor. That one dish won’t cross my lips again though I suspect it’s probably a dish other diners enjoy. The moral of the story is not to judge a restaurant after only one visit and based on solely one dish.

There aren’t many Thai restaurants in the far Northeast Heights. Thai Spice has cornered the market, but it would probably have done so even with several competitors. It’s a very solid restaurant that provides excellent value, hearty portions and friendly service.