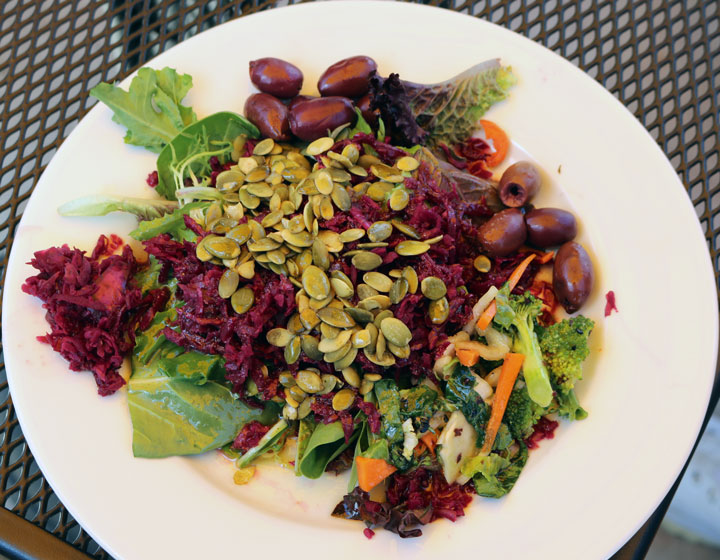 My Chicago born-and-bred brother-in-law Chuck considers being asked to lunch at a vegan restaurant akin to being asked to a Green Bay Packers pep rally. It’s a violation of a Windy City cultural norm–as inappropriate as telling a Chicagoan that: ketchup belongs on hot dogs, Mike Ditka and Da’ Bears could never beat the Detroit Lions, calling Mike Royko a mere journalist and that it’s okay to ridicule Harry Carey’s rendition of “Take Me Out to the Ballpark.” As with many Chicagoans, Chuck is an avowed meat and potatoes zealot (fanatic isn’t strong enough a word). Because he never would have acceded to my request to dine at a vegan restaurant, I waited until he answered “I’m up for anything” when I asked what he’d like for lunch. Yeah, it’s duplicitous and politician-like, but my Kim and I genuinely believed Chuck would like Vibrance.

Vibrance. Even the name bespeaks of veganism (or militant veganism to a carnivorous Chicagoan). Ask any vegan and they’ll tell you their lives are indeed more vibrant since they made the lifestyle change to veganism. They’ll tell you they’ve improved their heart and gut health, lost weight, lowered blood sugar levels and reduced their risk of heart disease. None of these benefits holds water with a staunch carnivore, especially one from Chicago. You have to understand that not only is Chicago, the “City of Big Shoulders,” it’s the city of gargantuan Porterhouse steaks, colossal slabs of ribs and pizzas as large as the tires on a tractor-trailer. Chicago is much prouder of its “Hog-Butcher to the World” sobriquet than it is to another nickname, “The Big Onion” (onions are vegetables).

Those of you who subscribe to the Rudy’s Country Store & Barbecue mantra “we didn’t claw our way up to the top of the food ladder only to eat vegetables” might not want to read further lest you risk reading such four-letter words as: vegan, raw food, gluten-free and non-GMO. Vibrance is all that and more. It’s an all-vegan restaurant whose specialty is living foods made from sprouted beans and seeds. Vibrance makes raw desserts, gluten-free baked goods and cooked foods. Since July, 2016, it has offered organic vegetarian specialties which are mostly locally sourced—as are featured artists who regale diners with live music.

Vibrance is located in the former home of Los Equipales, one of the city’s very best Mexican restaurants. Before housing Los Equipales, the previous tenant at the walled-in citadel-like complex was a branch of the Sunwest Bank. When you drive through the open gate for the first time, there’s very little signage to confirm that you’ve arrived at your destination. The situation is made a bit more confusing because savvy diners park under the adjacent overhang which once served as the bank’s drive-through. Then there’s an expansive dog-friendly patio physically separated from the restaurant. When you locate the restaurant, you’ll be impressed by an interior awash in vibrant colors, framed art and flourishing green plants. You’ll be more impressed by the aromas wafting through the air.

The Vibrance menu describes every item (probably for the carnivores among us who need to know what meat dishes the vegan items might approximate). Only one appetizer is currently listed, a salad roll described as two veggie filled rolls in rice paper with ginger, garlic and cashew sauce). Doesn’t that sound like something carnivorous lovers of Asian cuisine will enjoy? Entrees are global in scope: Asian salad, hummus plate, Italian mushroom pocket, curried lentil and sweet potato stew and more. The daily menu also includes a chocolate turtle cheesecake. Is it any wonder Kim and I believed Chuck would enjoy the heretical departure into the realm of vegan dining?

Besides, my friend Larry McGoldrick, the professor with the perspicacious palate and Dazzling (and vibrant) Deanell had raved about their Vibrance experiences. Larry’s astute assessment: “OK, you carnivores. Get over your animal desires and go here. It will blow your mind. Did mine!.” Vibrance has earned a 4.5 star rating on 28 reviews from Yelp reviewers, many of which are admittedly of the carnivorous bent. TripAdvisor contributors also rated Vibrance 4.5 stars on 17 reviews. The Albuquerque Journal restaurant critic described Vibrance as “the next generation of health food restaurant, moving far beyond the cliché of brown rice and steamed veggies into the realm of gourmet vegetarian fare.”

Two other reasons we believed Chuck might enjoy Vibrance is that he had grown tired of “everything smothered in red and green chile” and that on Sundays, Vibrance offers an all-you-can-eat buffet. For a trencherman of Chuck’s caliber, a buffet is a challenge. His eyes became as big as saucers at first glance of the gleaming silver trays in which featured fare was kept warm. They wandered quickly to the desserts where vegan cheesecake looked every bit as luscious as its carnivore’s counterpart. Believing he’d be slaking his thirst with “regular” tea, he filled his glass with kombucha, a fresh, organic, lightly effervescent sweetened tea replete with healthful probiotics. He loved it!

In three trips to the buffet, he sampled virtually everything available. His grumbling and snarling were quickly replaced by exclamations of “wow, this is good” with virtually every new item. The three of us probably enjoyed the curried lentil and sweet potato stew most. Not only does the curry have its characteristic pungency, it’s got a pleasant bite that blends very well with the sweet potatoes. We also enjoyed the ratatouille which looks nothing like the dish served in the animated movie of that name. The vegetarian lasagna drew much appreciation as did the stir-fried vegetables. From among the more “salady” items, the sauerkraut (made with purple cabbage) stood out as did the pepitas with which we topped our greens.