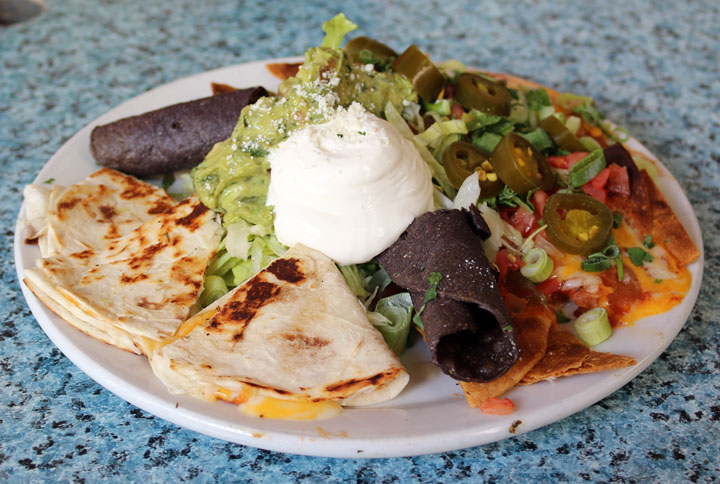 Located fifteen miles north of Santa Fe, just south of Pojoaque and within minutes of two garish native American casinos, Gabriel’s is a culinary oasis back-dropped by nearby cedar, cottonwood and pine tree-laden hills and the Santa Fe mountains further to the southeast. Gabriel’s entrance is flanked by unpeeled latillas, a “coyote fence” precursor to one of the best restaurant settings in the Santa Fe area. In the early spring and fall, weather permitting, the sprawling dining room and its Spanish colonial theme are often rebuffed in favor of an outdoor dining experience.

For al fresco dining, there are few options to compare with Gabriel’s, a restaurant perhaps more renowned for its experiential qualities than it is for its cuisine. You won’t read a single review from a credentialed critic which doesn’t sing the praises of the restaurant’s ambiance. You will, however, read scathing indictments of Gabriel’s cuisine. Alex Heard of the Santa Fe New Mexican, for example, was brutally honest in his assessment: “my takeaway has been that it serves average food and not much more, closer to chain-restaurant quality than what you’re promised in its advertisements.”

England’s The Guardian, on the other hand, put Gabriel’s on its list of the “top ten restaurants and cafes in Santa Fe.” That assessment was made by a Denver-based travel journalist who regularly visits family in Santa Fe. None of the locals with whom I’ve discussed Gabriel’s share the writer’s opinion though all of them rave about the capacious patio and the pine scented air. Most concede that the margaritas are quite good and that the combination of several margaritas and the fresh, salubrious air somehow improves the food.

Gabriel’s purports to serve the foods of the great Southwest and of Old Mexico. The restaurant’s Web site describes it as “an authentic mix of modern and classic Mexican and Southwestern dishes and seasonal specials,” also indicating that “The personal attention to service and food is what makes Gabriel’s special:a place where little touches enhance your whole dining experience.” Indeed, the predominantly Mexican wait staff, attired in black trousers and white shirts, is unfailingly polite and formal if not always there when you need a refill.

Gabriel’s has three distinct menus: lunch, brunch and dinner with the latter offering the most options from among the three. Aperitivos (appetizers) include a number of fairly standard options along with some unique offerings such as crab taquitos, bbq skewer and vegetarian quesadillas. Six vegetarian entrees, all of which will appeal to the omnivores among us, are available as are soups and salads. Other sections of the menu are titled A La Mexicana, Southwest Platters, Combinaciones, Mesquite Grill Platters, Sizzling Fajitas and Desserts. The menu indicates Gabriel’s uses free-range chicken, all chiles are mesquite roasted and cooking oil is high grade cholesterol-free.

Very popular is the pricey thrill of having your server prepare guacamole at your table. If you’re counting your pennies, the Guacamole Especial is an eleven-dollar plus thrill you might want to do without even though the guacamole is a real treat–meaty ripe avocados, fresh lime, cilantro, minced garlic, chopped tomatoes, salt and jalapeño mashed to a creamy consistency on a molcajete before your very eyes. Two entire avocados are used. Though fresh and creamy, the guacamole could use just a bit more jalapeño and lime, the two ingredients which really give guacamole its personality and without which, guacamole would just be mashed avocados.

The flavorful and piquant jalapeno based salsa is served in a generous faux molcajete (unfortunately, bureaucrats decided the authentic molcajete made from lava rock pose health risks) with plenty of lightly salted chips boasting of a pronounced corn flavor. The salsa packs plenty of cilantro and garlic, but it’s the jalapenos that will impress themselves upon your taste buds. Friends swear they were unable to taste anything else after having their taste buds seared by salsa they considered “too good to stop eating” delicious, but tongue-scorching.

5 August 2017: The Combinacione appetizer plate is a popular starter option, one which offers variety and an opportunity to sample a diverse range of dishes for two: nachos, quesadillas, taquitos and of course, Gabriel’s famous guacamole. The nachos are covered in a “ranchero sauce” and melted cheese along with chopped tomatoes, shredded lettuce, scallions and sliced (though somewhat anemic) jalapeños. The cheese quesadillas are indeed melty and cheesy on housemade flour tortillas, but don’t have much personality unless you top them with salsa, sour cream or guacamole. If the blue-corn tortilla taquitos were stuffed, it was in such a chintzy amount that neither of us were able to discern much.

5 August 2017: From the Southwest Platters section of the menu, you’ll find such regional favorites as San Diego fish tacos, Arizona chimichanga, rellenos de Santa Fe, Taos combination and Lone Star ribs. The latter are wholly unlike any ribs we’ve ever had in the Lone Star state. Described on the menu as “fresh baby-back ribs baked until tender and then mesquite-smoked and basted with our own barbecue sauce,” the ribs are absolutely fall-off-the-bone tender, but that’s not necessarily a good thing. The best ribs have just a little “give” to them. These baby back ribs also don’t have the low-and-slow smokiness that characterizes competition-worthy ribs. It’s pretty obvious that they’ve been baked, likely after being slathered with the “special” sauce and perhaps a rub. The sauce is very much on the sweet side with hints of citrus. Served on the side is a bowl of whole charro beans and French fry logs, both of which are rather unremarkable.

5 August 2017: Another Texas treat, tender skirt steak fajitas arrive sizzling at your table after leaving a steamy trail which invariably draws the eyes and nostrils of all other patrons. Supplementing the thinly sliced marinated skirt steak are a pico de gallo as colorful (with red, green and yellow peppers and sweet white onions) as it is delicious; more of the unctuous guacamole and lime slices. My Kim asked for an extra helping of grilled red and white onions–grilled not to the point of caramelization, but to a crispy, fresh consistency. If mariscos are more to your liking, seafood fajitas (tender scallops, tiger prawns and red snapper) are also available and equally delicious. Both corn and flour tortillas are made on the premises and are first-rate.

5 August 2017: A few days before starting my freshman year at Peñasco High School, my friends and I each devoured about a half-dozen or so corns-on-the-cob picked from our garden and grilled on my mom’s antique stove. It preceded a very painful ruptured appendix. Though an avaricious appetite for grilled corn was hardly the cause of my burst appendix, I didn’t eat grille corn for years. Gabriel’s elotes, a grilled corn topped with a chipotle mayo and queso blanco, reminded me of how good roasted corn can be. It also reminded me that roasting corn with friends is a great way to pass the time.

5 August 2017: For dessert, there are three options: flan, banana Vallarta and a tres leches cake you’ll be besotted by. Topped by a chocolate frosting, it’s one of the most moist and rich tres leches cakes we’ve had. Press your fork into it and the three milks from which it is made ooze out. My Kim said she’d drive the 75 miles from Albuquerque just for a slice.

The Gabriel’s experience is memorable even if not all your meal may be. You may visit for the food, but you’ll stay–and you’ll return–for the views and that enrapturing piñon scented ambiance.