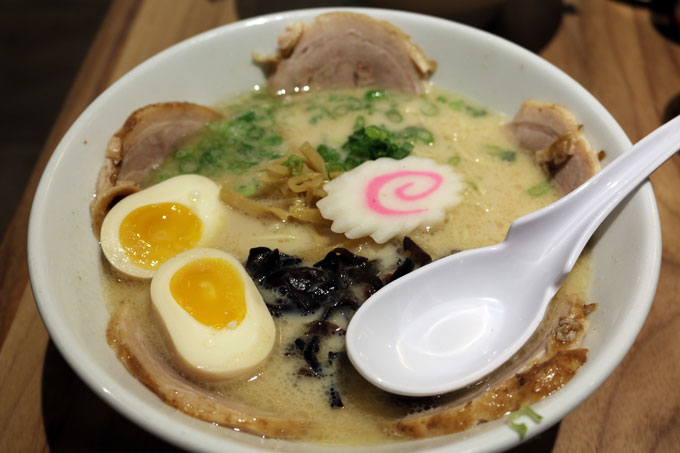 During a 2015 episode of the Travel Channel’s Delicious Destinations, glaborous host Andrew Zimmern articulated what may be the very best–or at least most comprehensive–definition of comfort food ever. “Comfort food,” he explained, “makes us feel good. Every culture has its favorites–satisfying classics carried throughout the generations. Simple recipes loaded with carbs and full of love. It’s the taste of a feeling: warm, cozy, hearty and homey. Comfort foods satisfy more than physical hunger. They’re the feel good favorites that connect us to our past, family and cultural classics that fill us with sustenance and warm feelings at the same time.”

At first browse, it appears that Zimmern’s definition applies solely to the act of consuming comfort foods, however, read closely and nowhere within that definition is it explicitly stated that comfort foods have to be eaten in order to be warm, cozy, hearty and homey. Nor do we have to masticate, graze, sup or savor comfort foods in order to feel good or to satisfy more than our physical hunger. Whether deliberate or unintentional, Zimmern’s definition can also apply to acts other than eating one’s food. Indeed, for some of us, the sense of warmth, coziness and comfort from food can be derived from acts other than eating it.

That may be especially true for ramen, arguably the most popular comfort food in the world. In Japan, ramen is so revered that several major cities boast of museums designed to pay homage to this national dish. Considering the veneration with which they revere this sacrosanct food, you might think the Japanese consider ramen as strictly for degustation, for lovingly luxuriating in its nuanced flavors, studiously imbibing its fragrant aromas and ruminating about the sheer delight of enjoying such sheer deliciousness. You might even believe Japanese would consider it heretical, perhaps even blasphemous for ramen to be used as a “play thing” or worse, as bath water. You would be wrong on both counts.

Since 2007, a Japanese spa has been offering patrons the opportunity to luxuriate in a tub filled with ramen. While health regulations mandate that only non-edible (synthetic) noodles be used in the hot bath water, real pork broth is added. The broth not only renders the water brownish, it imparts collagen which ostensibly has the salubrious benefits of helping improve the bather’s metabolism while cleansing the skin. Frankly, a tonkatsu (pork bone) broth sounds just a bit greasy and there’s no telling what bodily nook and crannies those noodles will sneak up into.

We joked about the ramen baths with our friends and founding Friends of Gil members Jim and Janet Millington who joined us for our inaugural visit to Naruto, an Albuquerque ramen house open since December, 2015. The Millingtons were already planning a visit to a ramen museum in Tokyo during an upcoming sojourn to the Land of the Rising Sun. I tried in vain to talk them into indulging in a ramen bath, but Jim has too much respect and love for ramen. Like me, he would rather eat a tubful than bathe in it. Googled images of ramen bathers did little to make the ramen bath concept more enticing. In fact, our Japanese server found the notion rather silly.

It’s becoming a tradition that Jim and I break in new ramen restaurants together. On 24 April 2014, we made our initial excursion to the delightful O Ramen on Central Avenue across the street from the University of New Mexico (UNM). Surprisingly, only one (currently vacant) storefront separates O Ramen from Naruto which occupies the space which previously housed the Mint Tulip Vegan Café. Out of concern and curiosity, we walked the twenty steps or so from Naruto to O Ramen and were very happy to see nearly every seat at both ramen houses occupied. It makes sense that collegiate types would appreciate having two ramen houses in close proximity (after all, ramen is a dietary staple for students).

Naruto may be new to Albuquerque, but it’s got a New Mexican pedigree. Founding owners Hiro and Shohko Fukuda opened the Land of Enchantment’s very first sushi bar some four decades ago. Since its opening in 1975, the Shohko Café has been considered one of the very best sushi restaurants in the Land of Enchantment, earning first place in the Santa Fe Reporter’s annual “Best of Santa Fe” edition from 2009 through 2014. Not strictly a sushi restaurant, Shohko serves a number of ramen dishes as well as soba or udon noodles and many other Japanese favorites.

The transformation from the Mint Tulip Vegan Café to Naruto is startling, an aesthetic and functional make-over. Bar stools overlooking the exhibition kitchen give diners a window to the real transformation which goes on everyday at Naruto. That’s the transformation of fresh ingredients into some of the very best ramen in New Mexico. There are similarities to the ramen at O Ramen, but it’s distinctive enough that comparisons will be in order. The menu showcases eight different ramen dishes, including some heretofore unavailable in the Duke City. We’re talking miso ramen, seafood ramen and vegetable ramen here. Also available are a number of entrees including kimchi fried rice, a chashu bowl (sliced pork with ramen noodles) and gyoza.

6 February 2016: If your experience with gyoza is similar to ours, you’ve found there’s very little to distinguish gyoza at one Japanese restaurant from another. Worse, there’s little to distinguish gyoza from dumplings you’ll find at any Chinese, Thai or Vietnamese restaurant in town. At first bite, we could tell the gyoza at Naruto is different. It’s better…legions better These pulchritudinous pan-fried dumplings are stuffed with the usual minced pork, but that’s where similarities end. The greenish tint of the pork is courtesy of Chinese leeks and scallions. They infiltrate the pork with an herbaceous quality no other dumpling in memory possesses.

6 February 2016: The gyoza isn’t accompanied by the usual soy-based dipping sauce served with most dumplings in the Duke City. Instead, you’ll find a condiment caddy at your table replete with everything you need to impart as much additional personality to your gyoza (or ramen) as you’d like. The caddy includes a pickled ginger that’ll water your eyes, pickled garlic that’ll ward off a family of werewolves, chile oil that’ll have you coughing and sputtering and another oil whose undoubtedly delicious qualities escape me. Darn, that means I have to visit Naruto again…and soon.

6 February 2016: Tonkotsu ramen is porcine perfection, an intensely porky elixir concocted by culinary wizards who, over many hours of simmering time, transform pork bones into an opaque broth with a rich, butyraceous flavor and the aroma of heaven. Naruto offers two versions of its Tonkotsu ramen, the standard “as good as winning the lottery” version and a super-rich version that’s even better than winning the lottery. The super-rich version includes Japanese pickled mustard greens, black mushrooms and chashu pork as well as any additional toppings (there are eleven of them) you may choose to add. The ramen noodles are imported from California where they’re fashioned to Naruto’s exacting specifications. They’re transformative, as good as you’ll find anywhere in Albuquerque! This is comfort food ramen at its very best, a melt-in-your-mouth dish that will make adults swoon.

6 February 2016: Even better if you can imagine that is a Miso Ramen (green onions, two slices of chashu, bamboo shoots and kikurago) a relative newcomer in that Miso Ramen has been made in Japan only since the 60s. The broth combines “copious amounts of miso blended with an chicken pork broth to create a thick, nutty, slightly sweet and very hearty soup.” Dismiss any notions you might have about miso soup; this one is many orders of magnitude better than any miso soup you’ve ever had at any Japanese restaurant. The dashi stock, the base for any miso soup, is made in-house. As with the Tonkotsu Ramen, there are twelve optional toppings. Try this special elixir with shrimp tempura; you’ll thank me later.

23 April 2016: During our second visit to Naruto, we sat in personal space proximity to a very uninhibited millennial couple. By uninhibited, I don’t mean they groped each other or flashed other diners. What they did may be an even bigger taboo in the oft prudish American culture. They slurped their ramen so loudly we joked they risked ingesting the ceramic off the bowl. Slurping ramen is perfectly acceptable, perhaps even expected in Japanese ramen and noodle restaurants (as detailed in my review of the Asian Noodle Bar), but not necessarily in Albuquerque. My Kim and I are still too westernized to have initiated our own slurpfest, but we didn’t judge or condemn the enthusiasm other diners had for very slurp-worthy ramen.

23 April 2016: Unlike tonkatsu ramen which tends to be heavy and cloudy, Shoyu ramen (which can trace its origin back to the very first ramen) is light and clear. Known for its tangy, savory and salty flavor, the basis for Shoyu ramen is, of course, Japanese soy sauce. Naruto’s version is made with a chicken broth and a special shoyu base with such toppings as green onions, two slices of chashu (salty, sweet, fatty, pork belly braised until it practically melts-in-your-mouth), bamboo shoots, scallions, white onions and two halved soft-boiled eggs which have been marinated in multi-flavored seasonings. These hard-boiled eggs are indispensable on ramen, a wonderful flavor profile contrast to the chashu. As with the miso ramen, tempura shrimp make a wonderful additive.

23 April 2016: Though more prevalent in Korea than it is in Japan, kimchi fried rice is no stranger in Japanese cuisine. Naruto’s version incorporates Japanese kimchi which doesn’t have nearly the personality and kick of Korean kimchi which is imbued with pungent properties from fermentation and a discernible level of umami (a pleasant savory taste imparted by glutamate). It’s a very good fried rice with many of the standard fried rice ingredients, but would be improved with the kick of Korean kimchi. Kimchi fried rice is one of only six appetizer-type items listed on the “Entrée” section of the menu, along with gyoza, fried rice, Takana (pickled mustard leaf) fried rice, chashu bowl and white rice.

23 April 2016: Dessert options are limited, too, but who needs a compendium of postprandial sweets when you’ve got tempura green tea cheesecake, a wedge of creamy, moist cheesecake drizzled with cocoa powder served atop a swirl of chocolate. The cheesecake is coated in a light tempura batter that lends a slight crispiness to each bite. The tempura also adds a savory quality that wonderfully complements the sweet-tanginess of the green tea cheesecake. Sliced strawberries on the side add their own tang. This is a unique cheesecake, wholly unlike the deliciously decadent creations made by Eli’s Cheesecake Company of Chicago offered about half a mile away at Saggio’s.

Naruto’s ramen is made for luxuriating–not the type you do in a tubful of hot water, but for slurping merrily with a soup spoon. Naruto is blazing new paths in culinary deliciousness.