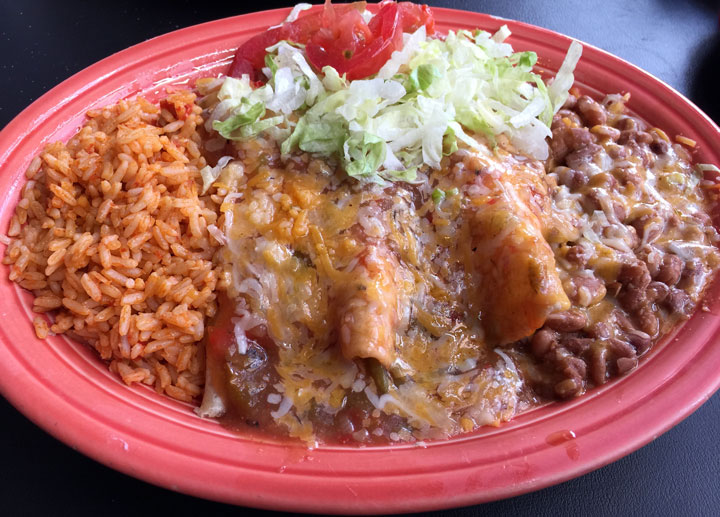 “Get your kicks on Route 66” is the mantra of nostalgic motorists who have lobbied for generations to preserve the heritage that is America’s “mother road”, the 2,448 mile highway commissioned in 1926 and decommissioned in 1985 and which traversed eight states between Chicago, Illinois and Santa Monica, California. Though Route 66 generally traces the state’s traditional east-west transportation corridor through the center of the state, its initial route when commissioned in 1926 resembled a giant S-shaped detour. It ran northwest from Santa Rosa to Santa Fe then south (through Bernalillo and Albuquerque) to Los Lunas. At that point, the road resumed its northwesterly route toward Laguna Pueblo, where it finally resumed its western direction.

Route 66’s original Albuquerque route basically followed 4th Street. One block west–on the corner of Central Avenue and 5th Street–a storied eatery opened in 1929. Now Albuquerque’s longest continually operating restaurant with a nearly 90-year run, this landmark institution began serving the Duke City as the Coney Island Cafe. In 1937, the Coney Island Cafe would begin casting its shadow on Route 66 when the fabled highway was rerouted through the center of the state, traversing the length and breadth of Albuquerque’s Central Avenue.

In the 1960s, the homey hot dog haven was purchased by Narke Vatoseow who renamed it Lindy’s Coffee Shop. Remnants of its past include walls festooned with nostalgic bric-a-brac and a long lunch counter at which long-time patrons congregate to catch up. Gone, however, are the red vinyl booths that you stuck to on hot summer days. Today, Lindy’s Diner remains a popular dining destination, an anachronism for which there will always be a place. Situated on historic Route 66, it may serve as a living reminder of Albuquerque’s nostalgic past, but has assured its future by serving hearty, homestyle meals for decades.

In 1999, Gourmet magazine feted Lindy’s in a feature called “Sentimental Journey Through America’s Main Streets.” In 2002, Jane and Michael Stern celebrated Lindy’s on their Roadfood Web site. Despite such national recognition and its longevity, many Duke City residents (especially the young whipper-snappers) have never heard of this unassuming historical treasure–and it’s likely the folks at Lindy’s like it that way. It allows them to maintain the personal touch and comfortable pace its clientele has come to love. After a nine-year absence (from 2008 through 2017), I returned to Lindy’s with my friend Bruce “Sr Plata” Silver who appreciates nostalgia almost as much as he loves chicken fried steak. Lindy’s offers both.

9 November 2017: Breakfast is served all day long and during breakfast hours you can order anything off the menu. American comfort food favorites, bounteous sandwiches, salads and New Mexican entrees hold prominence on the menu, but you can also order Mediterranean specialties. It’s a safe bet everything on the menu is somebody’s favorite. My favorite after three visits is the sour cream enchiladas, three flat cheese enchiladas served Christmas style (both red and green). The green chile is slightly more piquant than the red chile and while neither will singe your tongue, they’re both very flavorful. Most sour cream enchiladas seem to incorporate both chicken and cream of chicken soup, but at Lindy’s you can also have this entree with beef. Another difference is that a huge dollop of sour cream is added after the rest of the entree is baked. It imparts a mild and not too tart flavor that complements the chile very well.

Better chile is slathered on the Frito pie which includes a generous tossing of Frito corn chips garnished with a mountain of lettuce, tomato, onions and Cheddar cheese. Scale down that garnish and you’ll uncover one of the best Frito pies in the city. In its annual food and wine issue for 2013, Albuquerque The Magazine‘s staff sampled “every dish of nachos in the city” and selected Lindy’s nachos as the ninth best in the city. The magazine described these nachos as having been “sent by the Greek gods themselves.”

Breakfast favorites include a traditional American breakfast of bacon, fried potatoes and eggs. The eggs are prepared to your specifications. The potatoes are small, delicately cubed and well-salted spuds reminiscent of very good French fries with a soft texture inside. The star of this triumvirate, however, is the bacon. It’s the type of bacon only old-fashioned American diners seem to serve best–three six-inch strips of porcine perfection fried perfectly. if you’re tired of bacon as stiff and dry as jerky, you’ll love the pliability of this bacon. It’s crisp on the edges and beautifully bendable elsewhere with just the right amount of fattiness for flavor.

9 November 2017: For my friend Sr Plata, the epitome of comfort food greatness spells chicken fried steak, also a favorite of his sainted parents. For two dollars shy of a ten-spot, he found some of the very best in Albuquerque in a plate called the Cowboy Breakfast. You’d better arrive hungry if you’re thinking of ordering this behemoth breakfast which includes a chicken fried steak smothered in green chile and cheese with two eggs, beans, hash browns and two slies of toast. In addition to the green chile and cheese, Sr. Plata asked for and was brought a cupful of white gravy sans meat (Lindy’s has many vegetarian guests). He poured the white gravy on top of the green chile, making a rich dish even more calorific and delicious. The chicken fried steak is fork tender and delicious, as good as you’ll find anywhere along Route 66.

9 November 2017: You can add a short stack of fluffy, golden brown pancakes with syrup to any breakfast for a pittance. The syrup comes unheated, but you ask for it to be nuked for a steamy syrupy treat. Even better–and this is the way Sr. Plata loves his pancakes–is with heated butter. When the two golden orbs arrive at your table they’re glistening from the butyraceous touch. The pancakes, by the way, nearly cover the plate and are dusted with white confectioner’s sugar. If Route 66 has a food mascot, it would have to be pancakes. Lindy’s pancakes are among the best along the Mother Road.

In 2003, the Vatoseows launched Lindy’s American Cafe in a Northeast Heights former location of JB’s. Larger accommodations (seating for 140 patrons) than the downtown restaurant allowed for a more expansive menu, but the new cafe lasted just about a year. It must be true that there’s only one Lindy’s.