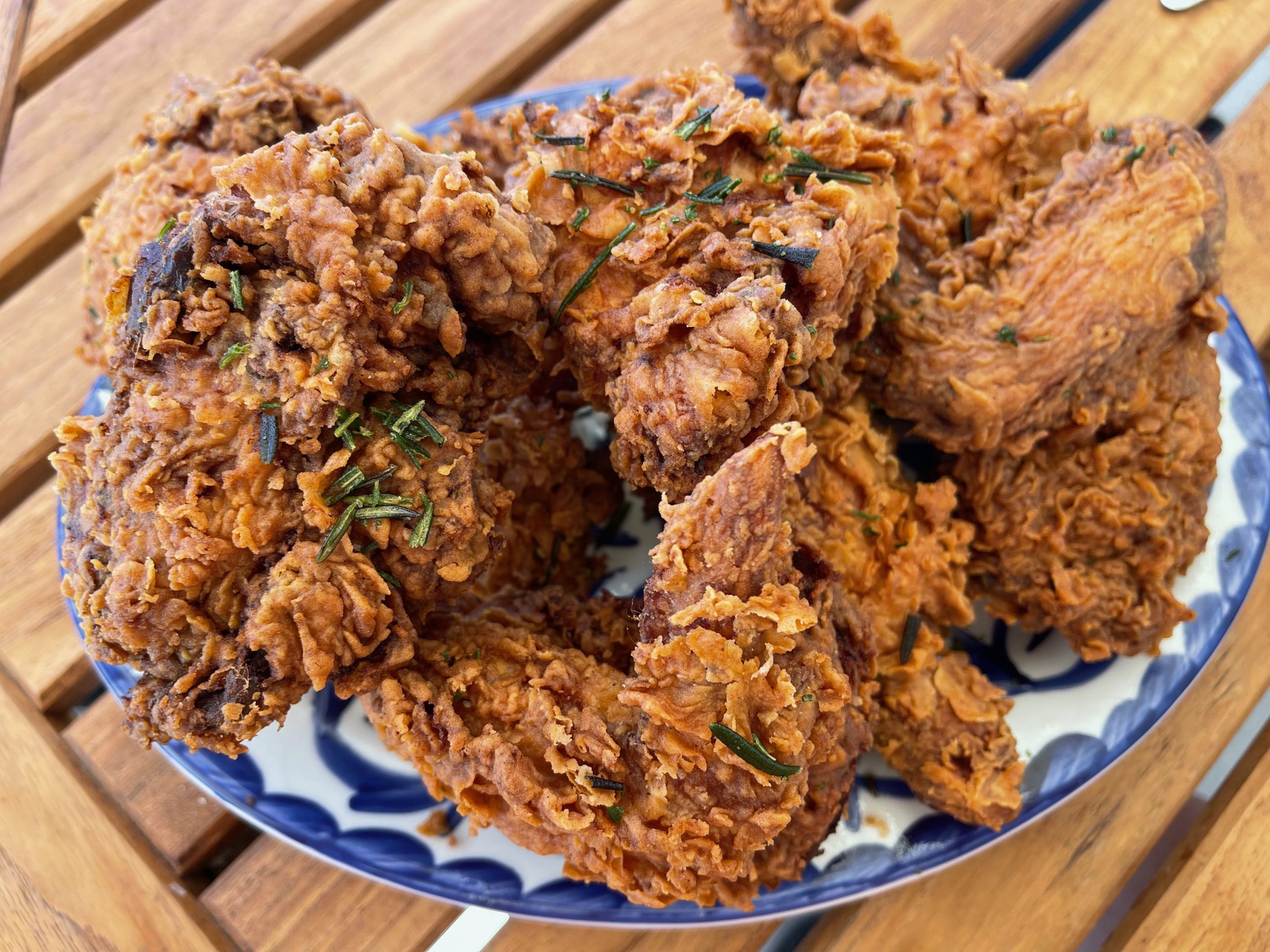 The lyrics to the “Godfather of Soul’s” signature song aren’t etched on the windows or door of The Feel Good, but several other thematic aphorism are.  There’s Virginia Wolf’s quote, “One cannot think well, love well, sleep well, if one has not dined well.”  M.F.K. Fisher’s “Sharing food with another human being is an ultimate act that should not be indulged in lightly” is etched on the door while Alan D. Wolfelt’s sage “Food is symbolic of love when words are inadequate” occupies another window.  Maybe because it’s a shorter quote, James Beard’s “Food is our common ground.  A universal experience.” occupies a small window.

One quote which perhaps should be etched on The Feel Good is San Francisco-based journalist Madison Park’s “Having a belly stuffed with comforting food can feel like a warm hug from the inside.”  In a 2010 article for CNN, Park explained why eating a lot feels so darn good.  You might be surprised that the reasons are more about evolution and survival than they are about (gasp…blasphemy) great cooking, superb ingredients and plenitude of portion.   “Evolution,” Park explains “has given us the instinct to eat a lot every time we can, preparing for hard times.  It’s the drive to survive, like puffy-cheeked squirrels storing up for winter. Our brains reward us for it, by releasing pleasure chemicals–in the same way as drugs and alcohol, experts say.”

Okay, most of us don’t think about physiology, evolution and survival instincts as the underlying reasons eating comforting food makes us feel good.  We only care that it does.  Erin Wade gets it.  In an interview with KOB TV News, the peripatetic founder-owner of Albuquerque’s Feel Good restaurant explained, “We want people to feel better when they leave than when they came in. We want people to feel uplifted.”  Talk about a raison d’être that should resonate with all diners.  Isn’t “feeling better and more uplifted” one of the reasons we enjoy dining out so much?

The Feel Good is a living, breathing, functioning paean to Erin’s grandma and other ladies in her family who taught her how to cook.   Hand-scrawled notes on The Feel Good menu follow in the tradition of all grandmas who scribbled tried-and-tested variations on menus they compiled in their own culinary vade-mecums.  “Try it Ruth Reichl-style with shallots,” for example, is inscribed next to mug of tomato soup on the menu.  There are other matronly musings and you’ll want to heed them all.  If Erin Wade’s grandma is anything like mine, the only accepted deviations to any traditional recipe were those proven over time or to make it uniquely her own.

Ironically The Feel Good occupies the Lilliputian space that until 2009 housed the Route 66 Malt Shop where conservative ideology  was unabashedly on display on the counter as you walked in. It made for interesting banter between the owner and patrons who weren’t like-minded.  Several other tenants have occupied the space since 2009, but none have provided such a dramatic departure from the Malt Shop’s Route 66 nostalgia theme as has The Feel Good.  The 900-square-foot space is bright and airy with a sophisticated and intimate feel.  In some ways, it’s both a continuation and a departure from Modern General, its sister next door and even moreso from Vinaigrette, Erin’s inaugural Duke City venture.

Befitting the cozy space is a rather limited menu which bespeaks of elevated tradition.  This stuff all sounds familiar, but has little loving touches you could imagine a doting grandma adding.  Fried basil and Parmesan toasties on the tomato soup, for example.  Both the “luncheon” and “supper” menus offer a soiree of soups, the grandma-approved cure-all.   And yes, you did read “supper.”  Doesn’t supper sound just a bit more homey and familial than dinner?  The terms, by the way aren’t synonymous.  My inaugural meal at The Feel Good was over lunch…er, luncheon where a menu of soups, tarts and tartines, sandwiches, “other fine snacks” and sides did have the intended effect of making me feel good…very good.

Legendary Green Bay Packers coach Vince Lombardi stressed “Perfection is not attainable, but if we chase perfection we can catch excellence.”  Don’t tell Erin Wade there’s no such thing as perfection.  She even used that descriptor on one of the sides and after a couple of them, you might actually be persuaded these perfect potato chips earn their sobriquet.  They’re waifishly thin, crispy and delightfully salty with none of the annoying “bottom of the bag” crumbs you find in store-bought chips.

These chips are even better with a side of tuna-avocado poke (check out the close-up in the June edition of Red or Green).   The chips are formidable enough to scoop up the poke (small chunks of fresh, pinkish tuna; creamy avocado, tomatoes and green peppers studded with black sesame seeds ).  It’s a combination as good as any chips-dip pairing you can name.  While The Feel Good may take pride in being “tradition-driven, not chef-driven,” this tuna-avocado poke has chef written all over it.  If you didn’t know better, you might suspect it’s ferried over from one of Albuquerque’s poke restaurants though this one isn’t overly sauced as some tend to be.

27 June 2019: Tomato soup and grilled cheese sandwiches are the yin and yang of comfort food. They complement and balance one another–the steaming fragrance of creamy soup a prelude to its swoon-worthy deliciousness; the melty, oozy food-porn quality green cheese with lightly toasted bread.  It’s no wonder the Barefoot Contessa Ina Garten calls the combination of tomato soup and grilled cheese “the ultimate comfort food meal.”  The Feel Good’s grilled cheese is a triumvirate of terrific cheeses: Cheddar, Jack and Comte on baked sourdough from the Modern General bakery. It’s relatively unadorned compared to some of the creative, everything-but-the-kitchen-sink grilled cheese sandwiches currently popular.   Take the crusty sourdough on a swim in the mug of tomato soup.  It’ll leave you satisfied and make you feel good…very good!

13 May 2022: According to the National Museum of American History, the Kentucky Fried Chicken family bucket was first created by Colonel Harland Sanders in 1967.  The bucket features the “trademark image of Harland Sanders in his Colonel Sanders outfit—white suit and black string tie—as well as the copyrighted tagline “it’s finger lickin’ good.”  Originally the family bucket contained fifteen pieces of chicken, a pint of gravy and biscuits.  A large spinning bucket atop a sign post became part of the Kentucky Fried Chicken image until sometime in the 1990s.

There’s no way the stylish and classy Erin Wade would serve chicken in a bucket even though “a bucket” and “big bucket (feeds 4)” are listed on the menu as fried chicken options.  Our “bucket” (eight pieces) was arrayed beautifully in a serving platter much like one my mom used.  Eight glorious pieces cover virtually the entire platter.  This is not fast food chicken served from a heating tray.  This is the type of chicken for which the proverb “all things come to those who wait” is apropos.  This is fried chicken prepared lovingly the way someone’s mother (likely Erin’s) would have prepared it for her family for Sunday dinner (and/or supper).  It arrives molten hot at your table so your first bite will unleash a small geyser of deliciousness.  Seasoned with rosemary, it’s got just a hint of the pine-lemon fragrance and flavor for which rosemary is known.  A rather thickly coated skin gives way to moist, tender, perfectly prepared poultry as good as you’ll find in Albuquerque (especially now that Ms. Gennie’s has closed down)

13 May 2022: In addition to ordering “buckets” of fried chicken, you can also order “a couple pieces.” Bucket aficionados will probably want to order one of two fixin’s options.  You’ll have a heckuva time deciding which one to order.  There’s green bean pickles, biscuits and jam OR mashers and gravy with coleslaw.  Kentucky Fried Chicken may have made mashed potatoes and gravy with coleslaw practically de rigueur, but we certainly didn’t want any more associations with bucketed food we don’t like.  Besides, the green bean pickles and biscuits and jam are terrific.  Maybe the green bean pickles should be renamed pickled green beans because that’s what they are.  They’re also superb with pronounced notes of cloves with their intense flavor and aroma.  The biscuits and jam are also excellent though we didn’t get nearly enough raspberry jam.  A pint or so would have been nice.

13 May 2022: There are four desserts on the menu.  Characteristic of an Erin Wade restaurant, they’re all the type of dessert your grandmother may have served you (or should have).  Mom’s chocolate birthday cake with chocolate buttercream frosting and a ganache filling was my Kim’s choice.  Characteristic of our Mars-Venus dynamic, she could eat a cake’s worth of frosting, especially if it’s buttercream.  Her husband, who’s not nearly as sweet, prefers only the part that isn’t frosted (unless the frosting is as strong as coffee).  She loved Mom’s chocolate birthday cake especially since she could enjoy all that frosting.

The other dessert options are cobbler (served hot or cold with a side of whip for a pittance), lemon tart and macerated berries and cream. By the way, with Mom’s chocolate birthday cake, a scoop of that luscious whip serves as a bed for a decorative array of blackberries, strawberries and raspberries.  For me, that was the highlight of the dessert.

The Feel Good lives up to its name, an uplifting venue serving up comfort food favorites that’ll make your day.  It’s the type of restaurant you’ll especially welcome on Mondays, but will love any and every day of the week.