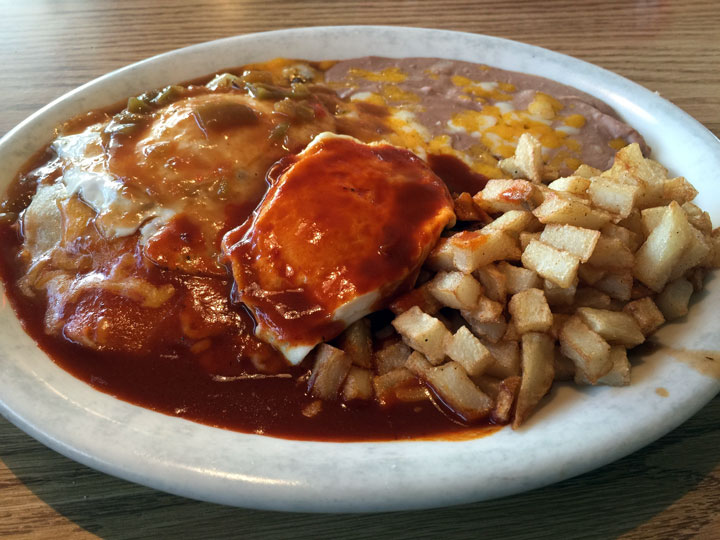 In the vernacular and tradition of Hispanic Northern New Mexico, few–if any–titles were held in such esteem and reverence by elder generations as “compadre” (male) and “comadre” (female). In his Dictionary of New Mexico & Southern Colorado Spanish, Ruben Cobos defines a compadre as a “ritual co-parent; a term by which godparents address the father of their godchild and by which the child’s parents address the godfather.” With the societal dissolution of the family entity, the term compadre doesn’t hold the same bonding connotation as it once did–at least in terms of raising one another’s families should the need arise. Today the term compadre is frequently used almost interchangeably with “paiser,” a derivative of “paisano” or countryman. Paiser is a Northern New Mexican word addressing a person from one’s hometown or county.

When Janice and Roberto Martinez launched Los Compadres in March, 1997, they must have had in mind a homey, family-oriented restaurant in which compadres could gather for delicious Mexican and New Mexican cuisine the way it’s been prepared for generations. Their mission statement as expressed so familially on their Facebook page bespeaks of concepts very important to New Mexicans: “The goal is to serve the best food in New Mexico and make customers feel happy and at home. So come in, get comfortable, and enjoy a nice meal with friends and family here at Los Compadres Restaurant LLC where Mi Casa Es Su Casa.”

When Brian Maestas a paisano from el Norte recommended Los Compadres Restaurant, he didn’t just tell me it serves great food, he asserted “they have the best Mexican/New Mexican in the state.” He cemented this audacious contention with bona fide credentials you can respect. Brian used to work at El Bruno and grew up in Cuba, New Mexico. El Bruno’s (the one in Cuba) is one of the ten best New Mexican restaurants in the state, so any comparison to its greatness has to be investigated. Besides, any restaurant with a name like “Los Compadres” has got to be good.

We’d driven by Los Compadres at its Isleta location on several occasions and despite the fact that its parking lot was always packed, we never stopped, usually because we were on our way to Kathy’s for one of the best burgers in town. Our loss! Los Compadres signage belied the fact that the restaurant may once have served as a family residence, no doubt with a sala in which compadres got together to talk about family. After fifteen years at the familiar Isleta location, the Martinez family relocated to the Northeast Heights, launching Los Compadres in the venue which has been the home to such restaurants as the Heimat House and Beer Garden and the Independence Grill. The original home of Los Compadres, by the way, lives on today as Lollie’s New Mexican Food.

In 2004, Los Compadres relocated again, this time to a Central Avenue venue just east of Route 66’s crossing of the Rio Grande. Now situated at the former site of a Village Inn, Los Compadres remains a very popular eatery, especially on weekends where short waits aren’t uncommon. There are several reasons beyond good food that friends and family pack the restaurant. Start with the welcoming family atmosphere and friendly and attentive service and you have a formula for success. Add generous portions of delicious food, piping hot coffee that’s replenished faithfully, prices reminiscent of the halcyon days of Route 66 and you’ve got a restaurant that draws patrons from throughout the city.

Los Compadres straddles that sometimes ambiguous line of demarcation between New Mexican food and Mexican food and in fact, serves cuisine unique to and shared by both (often the sole distinction being the degree of piquancy). The fiery salsa, by far the most piquant item on the menu, is some of the very best on Route 66. Its piquancy comes from incendiary jalapenos, but its essence is in the way those jalapenos meld with the tangy acidity of tomatoes and the refreshing fragrance of cilantro. Make sure to have coffee with the salsa and chips. The heat (temperature) of the coffee exaggerates the heat (piquancy) of the salsa even more. It’s a practice fire-eaters enjoy.

14 June 2008: Only a few entrees include a papa asada (Mexican baked potato), but you can ask for one on the side if you wish. Not even the English pubs we frequented can bake a potato as well as a Mexican restaurant and the papa asada at Los Compadres is no different, save for the fact that it’s about twice as large as most baked potatoes you’ll find at many Mexican restaurants. This papa asada is baked to absolute perfection–tender and moist on the inside with no desiccation or hardened crust on the outside. A few pats of butter and sour cream and you’re in potato paradise.

14 June 2008: One of the entrees with which the papa asada comes standard is the bistec a la plancha plate. A la plancha refers to meat or fish grilled on a cast iron skillet. It’s a great way to prepare a steak and seems to imbue it with heightened flavor, tenderness and juiciness. The restaurant’s version is a bone-in sirloin steak, not the finest cut of meat you can find, but one with a lot of flavor if prepared right. Los Compadres does it right! At about eight-ounces, it’s not sinewy or fatty as low-priced steak is apt to be. It’s better, in fact, than some steak for which you’ll pay twice the price. In addition to the papa asada, the plate includes a generous serving of refried beans topped with a sheen of yellow and white cheeses. The beans are delicious, albeit just a bit too salty.

14 June 2008: The menu offers two different combination plates. The number twelve combo, pictured below, is comprised of a crispy beef and papas taco, a cheese stuffed enchilada with red chile and a green chile relleno. There are several New Mexican restaurants in the Duke City (including a former honoree of Hispanic magazine’s Top 50 Hispanic Restaurants in America) that add potato flakes to their tacos, perhaps hoping to “stretch” the paltry amount of ground beef they add to their tacos. Los Compadres makes no pretense about their tacos. The menu will tell you up front the tacos include papas (not potato flakes), not something you see on many tacos, but quite good when not used as a filler.

The chile relleno is a tepid Anaheim with just a tad more piquancy than a bell pepper. It is topped with green chile which doesn’t pack much of a punch either, but it isn’t needed to make this a flavorful offering. Lightly battered, it is engorged with cheese which just oozes out as you cut into the chile. Better is the cheese enchilada topped with a red chile that makes the green chile seem incendiary by comparison. The red chile has a lot of earthy flavor and sweetness, but very, very little piquancy. The only disappointment and one I can reiterate about almost every version I’ve had in Albuquerque is the Spanish rice. Los Compadres rendition isn’t desiccated as you’ll find at many restaurants. Instead, it’s nearly overwhelmed with tomato sauce leaning toward the sweet side.

17 November 2017: My return visit to Los Compadres transpired some nine years after our inaugural visit, but that wasn’t by design. We tried several times to return–always on weekends–but we couldn’t find a parking place. That’s a testament to just how very popular this family-oriented gem is. Breakfast enchiladas (two stacked enchiladas with red and green chile topped with two fried eggs over easy with sides of papitas and refried beans) were my Douglas McArthur (I shall return) choice. Save for the overly salted refried beans, the behemoth breakfast place is a terrific option, one that will ensure you won’t be hungry the rest of the day.