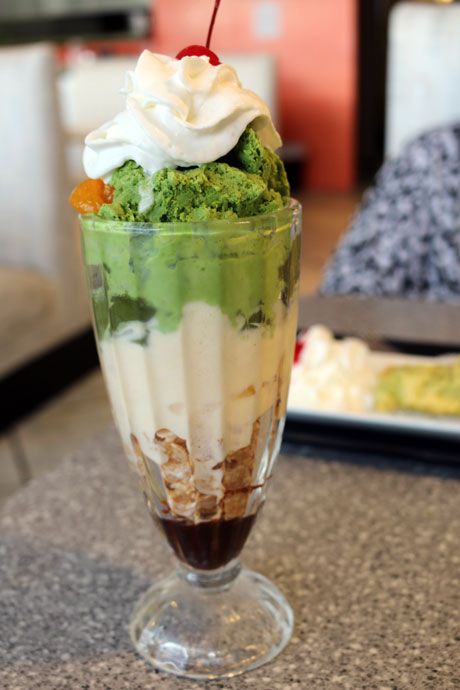 There’s an unspoken reciprocal arrangement between restaurant guests and the restaurant personnel with whom we interact. As guests, we show our appreciation for a dining experience well executed by tipping generously and maybe complimenting the kitchen and wait staff during and after the meal. Representatives of the restaurant– whether they be chefs, maître ds, servers or owners—typically thank their guests and invite them to return. All too often these interactions seem trite, maybe even rehearsed or expected. It’s what we all do because it’s what we’ve always done and it’s what’s expected to be done. Only during and after exceptional (or exceptionally bad) dining experiences do interactions between guests and restaurant personnel become more effusive…or so we thought.

During our inaugural visit to Aya’s New Asian Japanese Cuisine on Menaul, we experienced gratitude and friendliness so sincere and authentic that we couldn’t help but be touched. Even if the Japanese cuisine hadn’t won us over, the humility and friendliness of Aya herself would have. Let me step back at this point and explain that the restaurant is actually operated by two women named Aya (short for Ayako). One Aya runs the front of the house and serves as sushi chef while the other runs the kitchen. We only met the Aya who’s the public face of the restaurant and we were impressed.

The two Ayas have been in Albuquerque for just over half a year, having made the move from Seattle which they found too rainy and dreary. In contrast, they love the Duke City, especially its incomparable skies and weather. The Ayas plan on making their lives in the United States, having liquidated their assets in Japan to move here. Both classically trained in Japanese culinary techniques, they hope to introduce Duke City diners to the food of their homeland…and indeed, the menu offers a few “just a little different” items heretofore not found in the area’s Japanese restaurants.

Aya (the restaurant, not the owners) is ensconced in a timeworn shopping center on Menaul. To its immediate west is a Flying Star and just east is Relish. Wasabi and cranberry colored walls are festooned with serene paintings of lotus blossoms on one side and magnificent glass art showcasing Michael Miro‘s kabuki series on the other. Aya was delighted in my knowledge and appreciation of the kabuki practices depicted so colorfully. With an amazing command of English–considering she’s only been in America for about a year–she told us about her life in Okinawa. Her self-effacing modesty in accepting compliments on her English was but one thing we immediately liked about her.

We also liked the Web site’s URL. It’s not just aya.com. It’s ayako-san.com. In Japanese, appending a name with the suffix “san” is a title of respect which can be used with both female and male names and with either given names or surnames. It can also be attached to the name of occupations and titles. In Japan, restaurant owners are often called mama-san or papa-san by both customers and employees. This signifies a level of affection as well as respect. It’s easy to see that Aya deserves such a title of endearment. We also liked that menu items are spelled phonetically—how they sound. Some menu items aren’t necessarily spelled the way Americans or even other Japanese restaurants would spell them. For example, the American spelling for Japanese dumplings is “gyoza” but the Aya menu spells it “gyouza.”

There’s much to like about Aya’s menu. There are seven starters on the menu, including three recently added (such as the green chile Ohitashi and poke salad). Four ala carte tempura options and miso soup can also be ordered as starters. The next section of the menu is dedicated to curry—five types, each served with a small salad. Six noodle dishes, including miso ramen, will sate all of us who love to nosh on noodles. Nine rice dishes, several of the donburi variety, follow suit. Next on the menu are three platters which are served with steamed rice, small salad, soup and small dish of the day. Sushi, available only during dinner time, follows suit then it’s a vegetarian tofu teriyaki dish. Last, but certainly not least is a three item dessert menu.

31 December 2016: Let tempura tease your taste buds. The vege tempura is an excellent starter option, rewarding you with a generous plating of deep-fried assorted seasonal vegetables sheathed in a crispy tempura batter. Having been born and raised in the Windy City area, my Kim generally eschews vegetables unless they’re covered in meat and potatoes, but she loves tempura vegetables. Unlike fried foods in Chicago, these are virtually grease-less. Aya served us lightly battered green beans, zucchini, squash and carrots. Underneath the tempura sheath, each vegetable retains a nice crispness that is indicative of fresh vegetables. Tempura dishes are served with a light soy-based sauce.

31 December 2016: Another excellent starter is the aforementioned gyouza, five lightly stir-fried, house-made Japanese pork dumplings served with ponzu (thin, tart citrus-based) sauce. While Japan is steeped in ancient culinary traditions, gyouza isn’t one of them. Japanese didn’t start making gyouza until after World War II when Japanese soldiers were exposed to Chinese dumplings while serving in Manchuria. Gyouza are usually thinner, smaller (two to three bites), more delicate and fillings tend to have a finer texture than their Chinese counterparts. Made well, gyouza is as good as any Chinese dumplings you’ll ever have. Aya makes them well.

31 December 2016: You can emphasize the word “special” when a special of the day is posted on the slate board or Facebook page. As someone who tends to order specials more often than from the regular menu, I’m ever attuned for something new and different such as the Bara Chirashi Sushi Plate (cubes of tuna, boiled shrimp, egg, zencom, cucumber and avocado over sushi rice). While we’ve certainly had chirashi before, it’s always been served donburi-style (in a bowl). At Aya, the chirashi is served in a rectangular plate. The dish is pleasing to the eye and the palate with a nice balance of ingredients in good proportion to one another. Unlike chirashi we’ve had in other Japanese restaurants, we weren’t provided wasabi-sushi which really changes the flavor profile. Instead, we were left to enjoy sweet, delicate flavors that practically had us swooning.

31 December 2016: The Chirashi Sushi Plate is served with a salad, miso soup and pickled vegetables somewhat reminiscent of Korean namul (assorted unfermented salads). A simple salad (iceberg lettuce, shaved carrots) is transformed into a paragon of deliciousness with a cool, refreshing ginger dressing so good you’ll be tempted to lick the plate. The miso soup is much better than most we’ve had in Albuquerque where bouillon cube quality miso is maybe not the norm, but it’s shamefully all too common. It’s served hot as opposed to warm which gives it good miso creds with us and the tofu appears to have been made in-house.

31 December 2016: Another popular Japanese dish of Chinese origin is Yakisoba, a fried noodle dish similar to chow mein. Aya elevates this relatively simple dish of fried noodles and vegetables with the addition of bacon. Yes, bacon! In Japan, thinly sliced pork is most commonly used on Yakisoba. Japan needs to have a bacon epiphany! A generous amount of bite-sized pieces of smoky, delicious bacon coalesces with the thick, sweet sauce to make this potentially the best Yakisoba dish we’ve ever had (we can’t remember having one better).

6 November 2017: On the first Monday following the long overdue return to standard time, it seemed nothing could get me going despite having supposedly gained an hour of sleep. What’s the cure for Monday malaise you ask. The prescription for whatever ails you on Monday or any day is green chile–even in a Japanese restaurant. Aya’s green chile tempura is as good as you’ll find at many New Mexican restaurants. Not only does the chile have a pleasant piquancy, it’s served with something other than the de rigueur ranch dressing. A soy-rice wine dressing imparts sweet notes that contrast nicely with the heat of the green chile strips. The tempura batter is lightly applied and lends a delightfully crispy texture.

6 November 2017: Iron Chef Masaharu Morimoto describes ramen as “a dish that’s very high in calories and sodium. “One way to make it healthier,” he advises is to “leave the soup and just eat the noodles.” Do that at Aya’s and you’ll miss out on a very satisfying, soul-warming soup that’s surely the epitome of Japanese comfort food. Picture tangles of ramen noodles in a miso flavored soup topped with corn, sprouts, minced meat and butter. While other Japanese restaurants across the Duke City favor a pork broth for their miso ramen minced meat makes for a surprisingly flavorful protein. My sole complaint about this ramen–and it’s a nit–is the very thin sliver of butter. My preference would be for a healthy half pound of butter. The ramen noodles are a joy to eat though the Iron Chef’s contention that eating solely the noodles would be healthier has got to be wrong. These noodles are much too tasty not to be calorie-laden.

31 December 2016: Great desserts and Japanese restaurant are two terms not commonly associated with one another. If a Japanese restaurant in New Mexico even deigns to serve dessert, it’s usually plum sorbet or green tea ice cream. Aya offers several desserts heretofore unknown to us. The most intriguing may be the green tea parfait which is served on a goblet similar to what Dairy Queen might use to serve a sundae. Layers of flavor, color and texture define this dessert. Imagine corn flakes (yes, the Kellogs type), green tea ice cream, whipped cream, green tea jelly, chocolate and seasonal fruits. Where do you start? We discovered early on that this dessert is best experienced if you can combine flavors and textures in each spoonful. The combination of corn flakes, chocolate sauce and green tea ice cream is especially satisfying.

31 December 2016: We first experienced green tea tempura cheesecake at Naruto, one of the Duke City’s premier ramen houses. It’s since been an obsession. Comparisons with Naruto’s version were inevitable. At Naruto, the cheesecake is drizzled with cocoa powder served atop a swirl of chocolate. Not so at Aya where a thin tempura batter sheathes a beautiful wedge of green tea cheesecake. A dollop of whipped cream with a cherry on top is served on the side. It’s a very good cheesecake.

My introduction of this review posited the existence of an unspoken reciprocal arrangement between guests at a restaurant and the restaurant personnel who serve them. I explained that our experience with Aya was unlike the usual polite interaction between the two parties. As we settled our bill of fare and prepared to leave, Aya didn’t extend the perfunctory “come back soon.” She embraced us as one might an old friend or family member and told us how much she appreciated our visit and interest in her food. She meant it!

Aya’s New Asian Japanese Cuisine offers many of the comfort food favorites Americans have come to love as well as some new and different options which just might become new favorites. There’s also a strong chance Aya herself will quickly become one of your favorite restaurateurs.