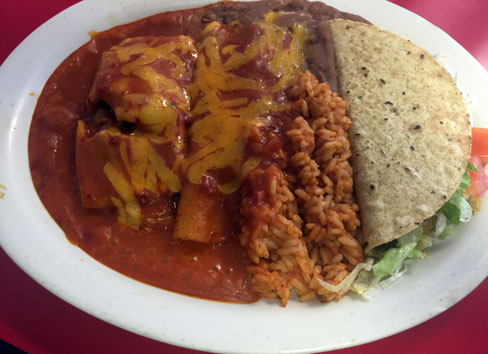 Having left New Mexico in the mid 1980s, the pangs of pining for New Mexico’s incomparable, capsaicin-rich cuisine have left Brian Riordan sleepless in Seattle. I can certainly commiserate, having spent much of 18 years away from the “Land of Enchilement,” (an appropriate sobriquet courtesy of the erstwhile Albuquerque Journal restaurant critic Andrea Lin. After discovering this Web site, Brian e-Mailed me to share his musings on and memories of the Duke City dining scene, many of which we shared in common.

We both recall fondly when Taco Sal served some of the best New Mexican cuisine in the city. For Brian, it was the #11, beef burrito plate, that captured his heart to the tune of nearly a visit per week. For me, the stuffed sopaipillas were the prototype New Mexican entree. With more than half a century under the same roof, Taco Sal has pleased a lot of palates during its run.

That was before the restaurant (but not the recipes) was sold and went from a restaurant whose name you’d swear was short for “salivating” (because that’s the effect it had on most diners) to a restaurant that has changed hands several times and lost the consistency which made it a favorite for so many. Fortunately Brian responds to his hunger with occasional visits to New Mexico and uncovered the next best thing to the Taco Sal’s of old–Taco Shel.

Taco Shel (the second “l” was dropped as a mnemonic) has been around for more than two decades, tucked into a nondescript Northeast Heights shopping center. Taco Shel is owned by Gary Maestas and his vivacious mother Theresa whose sister owned Taco Sal until the early 1980s. Like her sister, Theresa is as genuinely warm and friendly as can be. Her wait staff is equally effusive, greeting all patrons like old friends. You just might make friends with other patrons thanks to the close proximity of seating at the diminutive dining area.

The menu is posted on the east wall’s and includes all the old Taco Sal’s favorites including the aforementioned stuffed sopaipillas which are as good as my mind’s eye remembered them. Befitting the Lilliputian space, the menu is rather small. You won’t find carne adovada and you won’t find any nouveau or fusion New Mexican entrees, but you will find the standards: burritos, tacos, enchiladas, stuffed sopaipillas and combination plates brimming with deliciousness.

Salsa is still complimentary at Taco Shel. It’s delivered to your table shortly after you’re seated. You’ll swear some of the chips are larger than the bowl in which the salsa is served. The chips are indeed large triangles of corn imbued goodness. They’re also low in salt, a high positive for many of us. The salsa is a bit watery and may run off your chips and onto your clothes so caution should be exercised. It’s a good salsa with a pleasant piquancy.

Seasoned ground beef is stuffed generously into the pockets of perfectly accommodating sopaipillas which are then slathered with a rich red chile and topped with a generous garnish of lettuce and tomatoes. What the chile lacks in piquancy, it more than makes up for with flavor. Accompanied by pinto beans, Taco Shel’s stuffed sopaipilla platter lives up to its name; it will indeed leave you stuffed. Few stuffed sopaipilla plates in the Duke City can compare to this one.

Brian’s beloved number eleven plate (pictured above) is as wonderful as he remembers. It’s also humongous–two beef burritos smothered in red and green chile (Christmas style) and served with some of the best refried beans in town. The beef is seasoned for optimum flavor and is fairly low in salt (trusting diners to salt their food to taste–what a novel concept).

Unlike at some New Mexican restaurants where the plate is hot, but not the food on the plate, all dishes at Taco Shel are out of the oven hot–definitely prepared to order. Several years ago, my colleagues and I attended a seminar in a nearby hotel conference room where the air conditioning would have given a polar bear the chills. Taco Shel warmed us up with its hot food and delicious chile.

Combination plates are a popular draw at Taco Shel. Arguably there are none better than the #4, a pulchritudinous plate featuring an enchilada, a tamale and a taco with beans and Spanish rice. Both my Kim and I believe hard shells belong on turtles, not on tacos, but we genuinely enjoy the hard-shelled tacos at Taco Shel which are engorged with ground beef, lettuce and tomatoes with a ramekin of salsa on the side. Very few restaurants in New Mexico prepare anything more than a passable Spanish rice. Taco Shel’s is among the very best.

Thankfully tamales aren’t solely a Christmas treat (why would anyone limit their tamale consumption to the holiday season anyway)? At Taco Shel, they’re a ubiquitous offering. The only shortcoming with the #6 Tamale Plate is that you don’t have the experience of peeling off the corn husk yourself. On the other hand, chile is slathered on so generously that you wouldn’t want to have it all over your hands. The tamales are stuffed generously with porcine deliciousness.

Save room for the restaurant’s golden sopaipillas, puffy clouds of goodness a child might refer to as “sofa pillows.” You’ll work out your wrist on your table’s squeeze bottle, eking out dripping honey (and it’s real honey, not the honey-flavored syrup) onto each puffy treat.

While Taco Shel may elicit memories of the past, it doesn’t dredge out your wallet. Prices aren’t much higher than they were 20 plus years ago when Brian and I were regulars at “the old” Taco Sal’s. Seriously, if you’re tired of paying steak prices for dog food quality New Mexican food, you’ll appreciate the low cost, high deliciousness experience of a meal at Taco Shel.