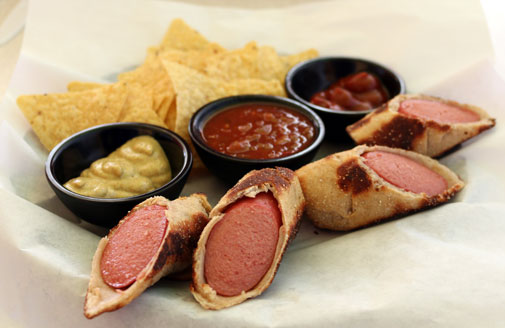 Most of us have known a wine snob or two. You know the type. They refer to themselves as oenophiles, a fancy way of saying “connoisseur or lover of wines.” They believe themselves to possess refined palates and won’t drink a wine that isn’t as cultured as they are. Even then, they first have to check the color and opacity of the wine. Then they twirl their glass for ten minutes or so before sticking their nose into the glass (like anteaters at an ant hole) and sniffing the wine noisily. They then proudly proclaim the wine has notes of oak, berries or butter. Their next step is to gargle with the wine, sloshing it between their cheeks and gums before finally imbibing of its delicate flavors and proclaiming it worthy.

In recent years, another adult beverage snob has arisen to give oenophiles some competition in the haughtiness department. They’re called “cerevisaphiles,” a term that refers to beer enthusiasts. Cerevisaphiles turn their nose up at Pabst Blue Ribbon and other “pedestrian swill.” As with their oenophile counterparts, the cerevisaphiles pride themselves on their discerning palates. They will drink no beer before or after its time and are careful to note its appearance (color, head density) and aroma before sipping (yes, sipping) it and contemplating its worthiness. Where the snobbiest and most well-heeled of oenophiles pride themselves on wine cellars, cerevisaphiles (like my friend Ruben) take pride in brewing their own.

That, my dear readers, is this gastronome’s feeble attempt to use humor and stereotypes to exploit the misconceptions behind the much maligned, much misunderstood talents and passions of oenophiles and cerevisaphiles. Most oenophiles and cerevisaphiles I know (including some of my best friends) are actually very down-to-earth and uncommonly modest. They’re justifiably proud of their bona fide gifts and abilities to discern and appreciate wine and beer in ways plebeians like me aren’t fully capable of doing. Where I’m mildly jealous is that sometimes their gifts and abilities extend to the culinary realm. With their enhanced taste buds and olfactory senses, they can discern nuances and subtleties in foods better than I can. For all I know, they even have better vocabularies, too.

Dana Koller is one such person. Born into a family which included talented chefs, Dana couldn’t help but develop a passion for quality foods. He parlayed his passions and precocious experiences in the food and beverage industries toward entrepreneurial channels, founding a marketing platform for local restaurants, bars, breweries and wineries throughout central and northern New Mexico. He also launched indulgenm.com, a Web site celebrating the Land of Enchantment’s wines. Although wine is his true passion, Dana’s refined palate also appreciates good beer.

Seeing an untapped opportunity in Bernalillo, Dana partnered with brew master Mike Waddy to launch Kaktus Brewing Company in October, 2013. In the vernacular of the brewing industry, Kaktus is a nano-brewery in that it brews only about 500 total barrels a year. Kaktus, named for the German spelling of the word “cactus,” is also unique in that all beer is brewed on steel, flat-bottomed German-made equipment which allows for lighter style lagers without compromising on the quality of other beers. This Lilliputian brewery uses all natural and organic ingredients in its beer. As you enter Kaktus, you can take a self-guided-tour of the brewery.

Though primarily a brewery in which patrons can gather together leisurely and enjoy high quality craft beer, Kaktus didn’t neglected the gustatory needs of its guests. From the onset, it offered a small, but very intriguing menu of surprisingly high quality options, all prepared without the luxury of a true kitchen. Initially Kaktus offered only Frito pie and a number of superb build-your-own hot dogs and brats, the least adventurous of which was an all-natural beef dog. Intrepid diners opted instead for Buffalo Chile Dog; Elk, Cheddar and Jalapeno Brat; All-Natural Beef Dog; Duck and Cilantro Game Sausage; and Wild Boar Game Sausage. Over time, Dana added salads and gourmet pizza to the menu. Andrea Lin, erstwhile critic for the Albuquerque Journal, gave Kaktus a three-star rating.

In part because of public demand, Dana entered Albuquerque’s burgeoning brewery fray in January, 2016, opening the first Kaktus taproom at the space which previously housed Amore Neapolitan Pizzeria and before that Bailey’s on the Beach. That location, on the western fringes of Nob Hill and eastern extremities of the University of New Mexico, is situated in an area already bustling with taprooms. Thanks to its family-friendly atmosphere and a menu sure to capture hearts, minds and appetites, Kaktus will do just fine. Half of the 2,400-square-foot space is, in fact, dedicated to dining while the other half includes a bar you can belly up to. Then there’s an expansive rooftop patio that offers exquisite city views as well as spectacular sunset panoramas.

Knowing what to expect from having visited Kaktus several times at its Bernalillo location, it thrilled me to see the reactions of my friend Bill and his colleagues Tisha and Jeff as they indulged in their first game meat hot dogs. Jeff, in particular, was practically verklempt with joy at every bite of his elk, Cheddar and jalapeno brat. It’s the same reaction my friend Sr. Plata had when introduced to the duck and cilantro game sausage in Bernalillo. It’s the same reaction I had while reveling in the splendorous glory of the meat sampler, links of duck, elk, jalapeno, wild boar and natural beef served on a bed of sauerkraut and accompanied by dipping mustard and house-made curry sauce. This magnificent meatfest will sate carnivores of all stripes, enrapturing their taste buds with well-seasoned sausages heightened in flavor by the mustard and curry sauce. Each sausage has its own distinct flavor profile and all are addictive.

There’s a warning on the Kaktus menu which cautions guests “if you don’t like our food, your taste buds may be stressed from the week and need another beer.” While it may be true of other eateries that the level of your enjoyment of the food directly correlates with how much you’ve had to drink, you don’t need to be “four sheets to the wind” to enjoy even the most basic of appetizers at Kaktus. That would be Dana’s Dog Bites, two-to-three bite-sized all-beef dog bites wrapped in a crispy pastry dough served with dipping mustard. This is the adult version of the little Smokies wrapped in biscuit dough you may have enjoyed in your youth. Though they probably won’t make you nostalgic for the “good old days,” Dana’s Dog Bites will make you thankful you can partake of adult indulgences.

The pizza menu lists three specialty pies, four gourmet pizzas, three veggie pizzas, three “simple” pizzas and a build-a-pie option. Just as he didn’t want to offer standard (translation: boring) bar-quality hot dogs, in designing the pizza menu, Dana wanted to construct pizzas different from what other restaurants offer. He wanted to put the pizza in pizzazz. Mission accomplished! Kaktus’s pizza menu is unlike that of any gourmet pizza restaurant in the area. He imports 51-percent whole grain crust from Arizona for the pies. The crust is firm, but has the right amount of “give” when ingredients are heaped on. The BBQ Piggie Pizza, constructed with curry, BBQ sauce, red onions, lots of bacon and Vermont cheese is an eye-opener, the antithesis of all too many pizzas in which barbecue sauce is candy sweet. This barbecue sauce pairs with the curry to give this pizza a more savory punch that complements the bacon very well.

For sheer uniqueness, you can’t beat the Red Pumpkin Pizza (thinly sliced pumpkin squash, sprinkled pine nuts, goat cheese and drizzled red chili sauce with bacon crumbles). Not only is the squash sliced waifishly thin, its texture is more akin to a dehydrated fruit than what you’d think would be “squashy.” While all ingredients work very well together, it’s the goat cheese and pine nut combination of which you’ll certainly take heed. The pine nuts provide a sweet, roasted flavor with a subtle hint of pine while the goat cheese lends a tangy, slightly sour flavor. The chili sauce adds just a little piquancy to the mix while the bacon provides a porcine presence, the inclination to enjoy of which is imprinted in the DNA of most carnivores.

The vibe in the Nob Hill version of Kaktus is a veritable world of difference from the vibe in Bernalillo. It’s not solely “a little bit rock and roll” compared with “a little bit country.” The Nob Hill location is more fast-paced and rollicking. The Bernalillo milieu is more laid back and sedate. What they both have in common is a great brewery serving great good.