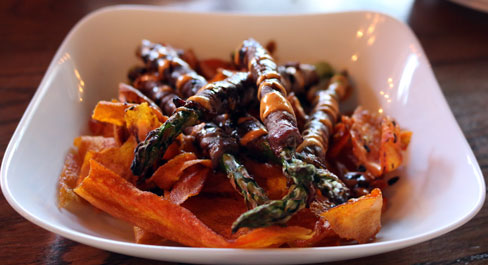 However well-intended, the corporate world’s “open door policy” doesn’t always have the desired effect of establishing trust between employees and their managers. This became evident during my first corporate gig after leaving the Air Force. My boss, whom Jerry Seinfeld would describe as a “loud talker” spoke at a decibel level rivaling the University of New Mexico’s fabled Pit during a Lobo fast break. Compounded with the fact that our offices were housed in a pod of flimsy mobile offices affectionately called Jurassic Park and it was a recipe for disaster.

Though held behind closed doors, one-on-one meetings were hardly private. Paper-thin walls and rickety doors meant everyone within a two block radius could hear my boss. Consequently employees remained apprised of matters–such as employee discipline, pay raises or promotions, for example–not intended for public consumption. At its very worse, we learned of a fellow employee’s dilemma as to which she should treat first, her chlamydia or her dandruff. For fear of bursting out in raucous laughter, we couldn’t look her in the face for a long time.

Memories of those failed “open door policy” meetings flooded back to me at Vernon’s Open Door restaurant when my Kim and I conversed in normal volumes without worrying about being overheard. Somehow sound doesn’t amplify as much in the cavernous dining room with its high ceilings and concrete floors as it did in ramshackle Jurassic Park. Vernon’s Open Door would be an excellent place in which to conduct open door policy meetings though it’s conceivable my old boss’s booming voice would still carry through the commodious restaurant. Moreover it’s an excellent place for a great meal in Albuquerque’s West side.

Vernon’s Open Door is an extension of the “Vernon’s” brand synonymous with Vernon’s Speakeasy (formerly known as Vernon’s Hidden Valley Steakhouse) a high-end chop house serving the Duke City since January, 2007. The Open Door concept is the brainchild of restaurant impresario Michael Baird whose credits also include Prime and Wise Pies Pizza. Vernon’s Open Door will actually replace Prime at its Rio Rancho and Los Ranchos locations. It has also taken occupancy of the yawning 25,000 square-foot space which previously housed the Stumbling Steer and before that Quarter’s BBQ. The entrepreneurial Baird plans to expand beyond the inaugural three locations and may eventually have as many as ten Open Door restaurants across the metropolitan area.

While the warehouse look-and-feel and sheer expanse of the capacious edifice made previous tenant spaces seem cold and industrial, Vernon’s Open Door occupies only a portion of the building. Other tenants, including another instantiation of Wise Pies Pizza will occupy other sections of the structure. The Open Door’s dining room, while still sizable, doesn’t feel like a Sam’s Club version of a restaurant. With several wall-mounted flat-screen-televisions placed strategically and tuned to sporting events, the restaurant has the look and feel of a combination sports bar-casual dining restaurant. It is not–by design or price-point–a high-end restaurant as is Vernon’s Speakeasy. In fact, you won’t find anything on the menu priced above the twenty-dollar mark.

The menu at Vernon’s Open Door features “modern American cuisine,” a rather ambiguous term most often associated with a fusion of culinary techniques and ingredients emphasizing high quality, freshness, locally produced, in-season, often organic and healthful foods. It’s an ambitious and interesting menu sure to appeal to most diners. The same menu is available for both lunch and dinner, but not during Sunday brunch (served 10AM – 3PM). The menu includes vegetarian and gluten-free options.

Six starters festoon the appetizers menu. There are also six choices in the soup (including a soup du jour) and salad menu. Sadly the sandwich section of the menu is not a mirror image of the superb sandwich menu offered at Prime, but it does afford diners the opportunity to fall in love with new sandwich options. Instead of listing a phalanx of burger options, Vernon’s Open Door has a “burger builders” option listing a variety of ingredients with which to construct your own burger. Entrees include some very interesting takes on conventional dishes (a chile relleno stuffed with calabasitas, for example). Four dessert options are available.

Among the more intriguing appetizer options is the asparagus con carne (asparagus wrapped with tender New York strip steak, char-grilled and topped with Balsamic reduction and sriracha aioli) on a bed of carrot chips. To shave the New York strip steak into such thin slices requires that the steak first be frozen. Making the shaved steak malleable enough to wrap around the asparagus then requires a thawing process. It’s an exacting process that the chefs at Vernon’s Open House has mastered. Asparagus never tasted so good. At first, the carrot chips seemed like an “aside,” but we found ourselves wanting even more of these delectable delights. They’d give the best potato chips a run for their money.

On an unseasonably cold winter day, the only soup du jour which makes sense for many New Mexicans is green chile stew, the elixir which elates and sates us most. We like it hot, both from a temperature standpoint and from the heat generated by the piquant pepper for which this sacrosanct stew is named. This stew passes muster on only one of those two aspects. It is served piping hot, the way all food should be served. Alas, it lacks the piquancy that warms you to your core. My Kim, who’s hardly a fire-eater, described it best as “a very good beef stew.” On the Scoville heat scale, the chile wouldn’t rank much higher than a bell pepper.

Ordinarily steak entrees elicit much more excitement from my more carnivorous better-half than from me, but the Open Door’s grilled flank steak appealed to my love of diverse flavor combinations. It’s described on the menu as “expertly grilled flank steak served with a red pepper and blistered grape tomato couscous, topped with blue cheese and haricot vert braised in bacon lardons and onions, paired with your choice of garlic demi, au poivre, mushroom bordelaise or gorgonzola cream.” The dish had me at “couscous,” a coarsely ground semolina dish that’s a dietary staple of several North African countries, but it sealed the deal with the mushroom bordelaise, a hearty sauce made with wine and earthy fungi. When it comes to dining, I’m not a monogamous guy, typically ordering something different every visit to a restaurant. This dish may become a regular.

When it first launched, Prime showcased high-end delicatessen and specialty food shop offerings such as sumptuous sandwiches made with premium ingredients. The name of each sandwich (The Hit Man, for example) appeared to have been spit out of a Mafia nickname generator. The sandwiches at Vernon’s Open Door are more the type you’d find in restaurants that don’t necessarily specialize in sandwiches. They’re more of the “vanilla” variety compared to the high-end deli sandwiches at Prime. That doesn’t mean they’re not quite good. The roasted prime rib sandwich (shaved prime rib, sauteed mushrooms, melted Swiss, green chile and au jus on a ciabatta bun), for example, is thoroughly enjoyable and generously appointed. The sweet potato fries might be the best in town, too.

It’s understandable that Vernon’s Open Door wants to carve out its own identity separate from its elder sibling. That includes featuring a repertoire of dishes unique to each restaurant. Understanding that philosophy doesn’t imply I’m happy about it. With its Chocolate Silk, Vernon’s Speakeasy serves one of the very best desserts in New Mexico. We had so hoped it would be available at the Open Door, but were left disappointed. The cinnamon roll bread pudding (cinnamon roll white chocolate bread pudding with vanilla creme anglaise on top of white chocolate and caramel sauce topped with ice cream) isn’t consolation prize worthy. It’s just too sweet and rich for our blood.

Vernon’s Open Door is primed to be very competitive in the casual dining arena. It’s got the pedigree to succeed in a venue that wasn’t inviting and the menu to keep diners happy and coming back.