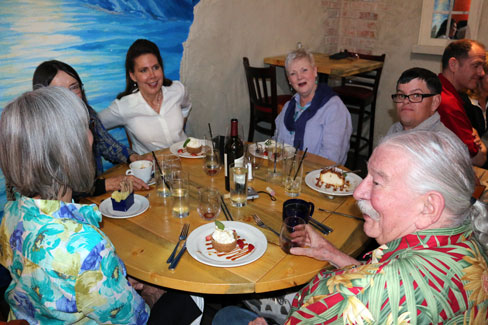 When Sheri LaVigne was a little girl, her family moved to a small farm in Corrales. Her mother Kay Lucas bought a Nubian goat they named Mocha which provisioned the family with everything from farmer’s cheese to goat’s milk ice cream. Sheri got up early every morning to help her mom milk Mocha, an experience which helped foster her lifelong love affair with cheese. That love was rekindled when she lived in New York City just around the corner from a cheese shop. A few years later she and her husband relocated to Seattle where, despite a thriving food scene, there wasn’t a cheese shop to be found. Deciding she would be the one to rectify the situation, in 2009 she launched Calf & Kid, an artisan cheese shop. You may have seen Sheri on television not that long ago when she was featured on The Layover with Anthony Bourdain, whom it turns out is quite the turophile (a connoisseur of cheese). He spent an hour tasting various cheeses with Sheri guiding him through a number of the “runny and smelly” cheeses he craved. Not surprisingly the Calf & Kid has become über popular in Seattle where Sheri has cultivated a vibrant cheese culture showcasing fine cheeses from throughout the Pacific Northwest and beyond. Her proud mother Kay is understandably very happy that the early morning experiences she shared with her daughter in Corrales proved so inspirational.

Kay no longer gets up early in the morning to milk goats, but she remains one of the Duke City’s most passionate and knowledgeable gastronomes. Kay and doting husband John are charter members of the Friends of Gil (FOG). On Friday, January 29th, they organized the inaugural FOG event for 2016. Twenty-three savvy diners–including first-timers Mary and Mack Kroner, Barb and Jim White and Bruce and Soozie Terzes–got together at Jinja Bar & Bistro for an evening of fun, food and friendship.It was a wonderful event enjoyed by one and all. The only thing missing was YOU. Barb and Jim White volunteered to organize the next FOG event and you’re invited. Stay tuned to this blog for more details.